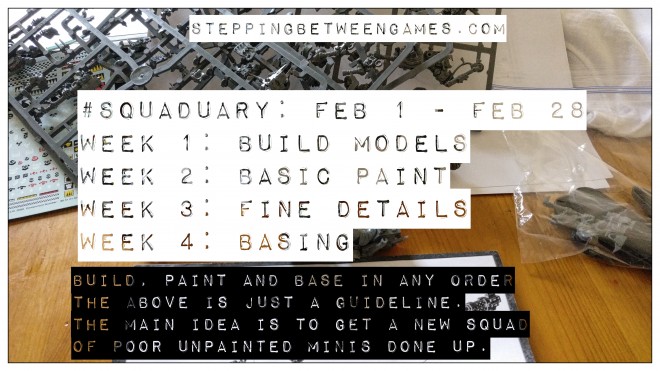 It's SQUADUARY time again!  This year I am pledging two small squads, 11 models in total.  Both squads have been assembled and primed prior to the challenge.  I post a few WIP pics below to show how assembly went.  These squads are part of a Horus Heresy Dark Angels Legion army I've been considering for quite some time.  In January, I painted up (mostly) two squads of 10 tactical marines for this army.  In February, I'm adding to the force. 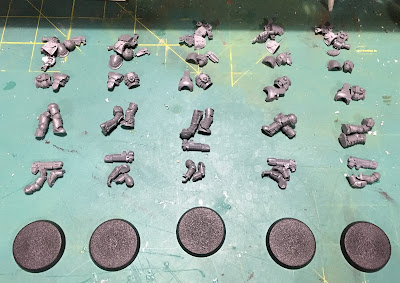 The first squad will be a tactical support squad in mark III plate armed with plasmaguns.  These were built from the Burning of Prospero sprues with Forge World Dark Angels mark III shoulder bits.  These marines are drawn from the Legion's original Terran forces. 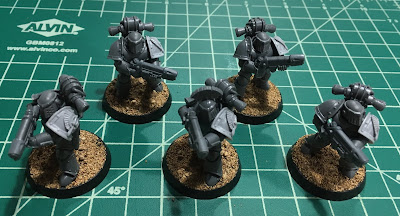 The second squad will be a heavy support squad in mark IV plate armed with missile launchers.  These were built from the original Betrayal at Calth sprues and include Forge World Dark Angels mark IV torso, shoulder, and head bits. They are drawn from the new Caliban recruits and will display the Legion icon on a field of Caliban green as the Lion decreed. 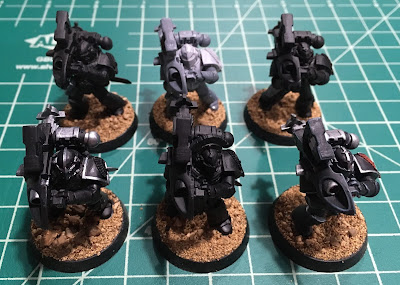 This squad was an original unit I started a while back.  The front right model is the test model for the paint scheme.  The model on the front left was the next I had started painting before I took a break to work on other projects as I had no Horus Heresy players to play against. I re-based the models to match my new thoughts on the force and added a sixth marine to round out the points for an initial 1000pt  army.

Both squads are fully primed now and it's time to get painting!  As a stretch goal, I would REALLY like to complete the second tactical squad that I didn't get done last month.

Best of luck to all of my fellow Squaduary challengers.