After further unpacking, I realized I had left out a decent percentage of my force; more than just a couple drop pods.  After unpacking and adding these forgotten Unforgiven, the array for battle now looks like this... 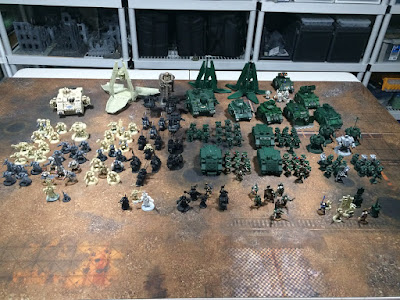 Unearthed were:
Now I am  content!  I need to update the veteran squad for the latest 7th edition rules and codex and return them to service.  Then I think I will build a new army spreadsheet to track this force better.  I have never had a formal build plan for them, nor a way to track progress.  So far the 5th company captain, his command squad and the first two tactical squads are table-top ready.  I need to complete the two squad rhinos and add a suitable command vehicle when the landraider or a drop pod isn't used for the task. That fills out compulsory units for the force-org.  Though with formations and the 7th edition environment, this hardly seems as important as it once was.

There are also models to be built - a flyer and black knight bikers for the 2nd company along with their company master, Samuel!  I have never been much for Ravenwing, but they shine in the current rule set and codex so I should really give these important members of the chapter more time and attention!!

So...the plan is to alternate updating this force with building out some 1st Legion models from the Horus Heresy.  I Love the flavor and the different models and paint scheme will no doubt add variety.

Oh...and I shouldn't neglect the un-built Mechanicum force waiting int he wings either...or the Red Hunters I started right before packing up for the move...or the inquisition vehicles to support the Inquisitor and retinue I posted last year...or the DEATH KORPS! That is where this whole blog journey began after all...

Plenty to do in 2016, regardless.  I wish the best for your own hobby progress and achievements.

While it has been a while since my last post, the wait has hopefully been worth it.  The family moved house last August (though anyone who has moved a family knows the process starts way before the actual move...) and my old basement hobby man-cave has transitioned to a similar, but more spacious and now dedicated, basement hobby man-cave!

2015 finished off with the space roughed out, and an actual game of 40k!  Woohoo!


Decent storage as shown and a good sized painting/modelling space.


And a small dedicated air brushing space which should soon feature a spray booth and venting system to deal with any fumes.


The addition of the foam floor tiles has really dressed up the space and will add hours of comfort for tired feet during long games.  Also, the dedicated gaming table will mean games can be left in progress for weeks or months (?!) as necessary to meet the busy schedule of my gaming buddies and our families.

To kick things off proper, we finished 2015 with a custom three-way 40K game featuring Tau, Necrons, and Grey Knights. With the game ending at the conclusion of turn 4, the Tau took away the victory!  Xenos filth that they are...I have no doubt the Grey Knights would have persevered had the Emperor granted further turns!  Still, families and all, we still got in ~5 hours of good gaming fun.


It was interesting to play a game of 40k with three player turns per game turn.  We chose not to do a 2-on-1 game as we typically do, and quickly designed a format for three players per turn.
I think I got all the special rules/modification that were used.  The game was great fun and I look forward to more games in the new space.  I invested in a couple 4'x6' mats from Gamemat.eu and have not been disappointed.  Much more fun than playing on plain grey or green felt as my group has done since the mid 90's...

Last but not least, I decided to array my functional Dark Angels army (not including all the various spare parts and "optional" weapons figures) on the new table en mass for a phot op while unpacking various bits.


From left to right we have:
Most squads have alternate models for certain heavy/special weapons I might want to swap out.  Some terminators are magnetized for optional weapon load outs. The rhinos, razorback, and one whirlwind all convert between the rhino and razorback chassis.  I also have two troop drop pods and a dread drop pod not in the picture above.  I haven't unearthed them from the piles of boxes yet. And an unbuilt Samuel on jetbike...probably other stuff one I finish unpacking...

I resolve to make more progress on this force in 2016 as well as adding some 1st legion models for the Horus Heresy era, though I don't see myself playing any actual 30k games.  I have always wanted to model the original 1st legion ever since reading the Dark Angels back story, and especially after ready the Horus Heresy books from The Black Library! The Dark Angels where not my first army (I started with 2nd edition orks!), but they have remained my main army since 3rd edition.

So that's where I'm at as we swing full speed into 2016.  I look forward to sharing more hobby as I settle into the new space.  Check back to see and keep me honest!

I have become a veteran of the The Long War and can't say enough good things about the approach to "bringing hobby back" that they so freely abd passionately espouse on their site and through their various videos and podcasts.  Might be something to check out...

Cheers and Happy Gaming!
Posted by DAM at 1:52 PM No comments: