In an attempt to freshen my terrain collection and do some justice to the great game mats I picked up recently from gamemat.eu, I have dusted off my old box of Cities of Death buildings.  The set was from GW and is now long out of print.  Here are some work in progress buildings: 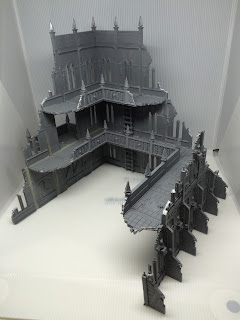 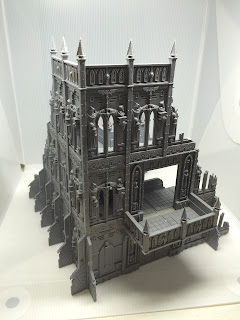 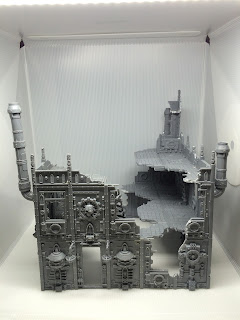 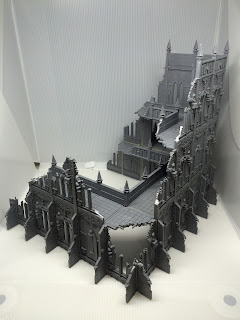 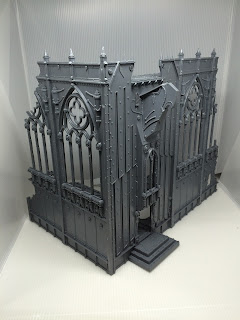 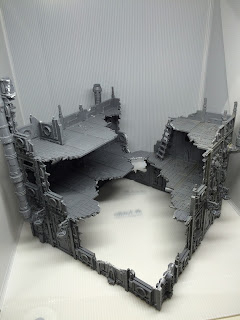 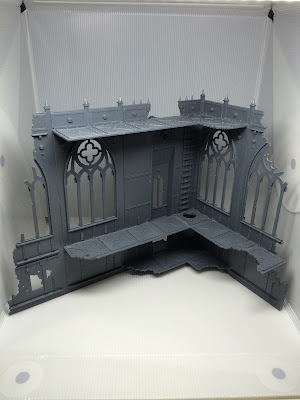 These are various angles of three buildings: an Administratum, Manufactorum, and Ministorum ruin. Below is a set of progress pictures of a second Administratum building which can be placed standalone or connected ot the back of the larger ruin to form one big building.  This piece was a test model to prove out some techniques I have not use before. 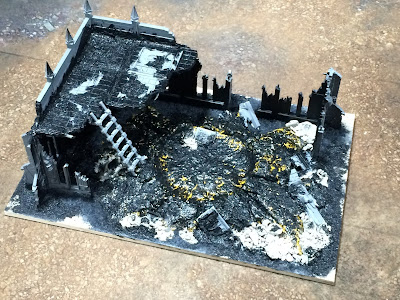 The ruin is based on a 1/4" sheet of plywood for stability and to prevent any warping or damage over years of play and rough storage. This approach has served me well with the existing foam-board city terrain I have used for many years. A two part epoxy was used to cement the completed plastic terrain to the plywood, along with an old GW moonscape crater.  Next I used super glue to attach various off-cuts from the plastic Cities of Death terrain followed by a mixed size of rocks sourced from Woodland Scenics talus. Finally I used Vallejo Black Lava to tie the elements together and add a general layer of grit to the piece indicative of the remains in a war zone. This final step really helps blend an wear the polished look of the plastic model.  I should also note that I liberally hacked away at portions of the plastic ruins with my flush cutters to add extra damage and variety to the otherwise limited pieces available in the plastic kit. 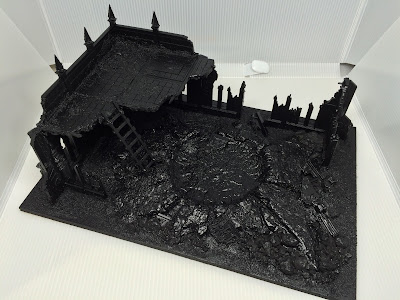 Here is the ruin with a coat of black primer.  I use a spray paint from Army Painter, but any good black primer should do.  may folks use automotive primer for its durability... 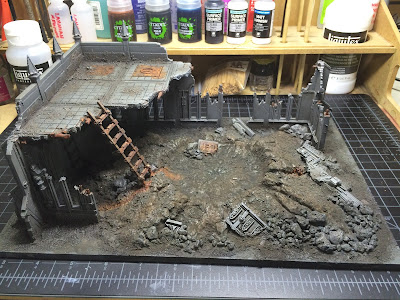 Now I jump ahead to the finished piece.  I used an airbrush to lay down various browns and greys to the ruin.  Then set about with a dry brush to highlight and detail the piece.  Finally i broke out the GW technical paints to add some corrosion and rust effects.  This was my first time using these and I am very happy with the results. 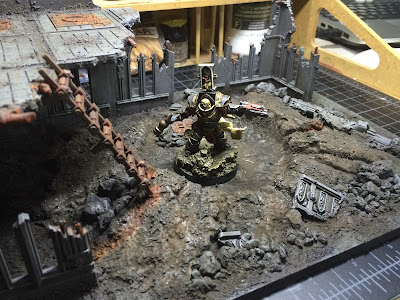 Inquisitor Russ stalks the ruins in search of heretics to expose to the Light of the Emperor...

I hope to bring you more updates of the remaining pieces completed now that the test model is done.  I love the look.  These will sit nicely on my new mats and add a great new setting for future battles once they are complete...  Waiting in the wings is a power generator (pieces sourced from Secret Weapon Miniatures) and various promethium pipeline sections!

The First Legion: A Test Model 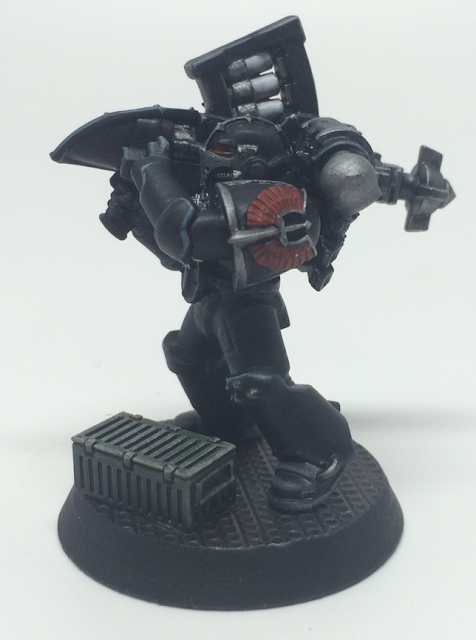 As I get back up and running in my new hobby space, I have shown the light of hobby back on my Dark Angels.  Along with some hobby effort going into my 40K army, I have been champing at the bit to go after a 30K force.  Not for the game so much, but for the pure joy of finally modelling the First Legion without endless scratch building and compromise. A combination of the Betrayal at Calth boxed game and the recently released Forge World First Legion upgrades have made for some promising fun! These will be true representations of forces from the pre-Heresy First Legion!

Below is a test build and paint scheme for a 30K First Legion marine.  This model will become part of a 5-man heavy support squad.  I wanted something very different for bases compared with the balance of my 40k armies which use primarily sandy/earthy schemes.  So I invested in "steel plating" resin bases from Secret Weapon Miniatures. I think these make for a good theme for this 30K force as I imagine them campaigning within orbital defense stations, within the bowels of great warships, within the great forges of the Mechanicum, etc.. 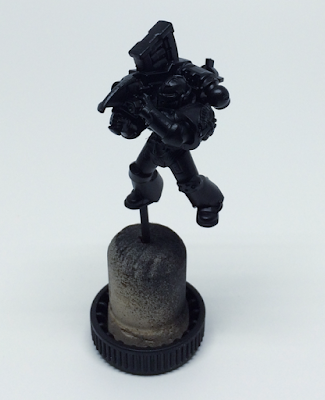 I started by mounting the model on a old cork stopper and basing it with Army Painter black primer. I've always based my miniatures before priming and would hold the bases, or the models, while painting.  Sometimes this resulted in some paint being worn off during painting but for the most part I was just transferring a lot of oils from by skin to the model during painting. Not to mention fussing with not getting model paint on the bases and base paint on the model. So I'm trying to improve in that aspect with this project.  I don't need or really expect to play with this force, so there is no rush to get them table-ready. 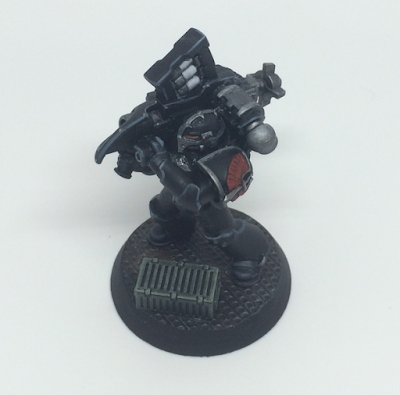 I reached this stopping point and flat-coated the model to seal the paint job.  It'll stay in this state while I plan and apply transfers, then consider how I want to complete the highlighting and weathering.  I stuck close to the Forge World imagery from book six of their Horus Heresy hardback series and from their website.


To me this is now the modern canon for what First Legion marines looked like. I will get some better shots of the completed model.  These pictures are quite washed and I didn't realize that while taking them late last night. I'll leave you with a few more images of the test model.

Comments are welcome. Hopefully I'll have some completed pics to put up here soon. 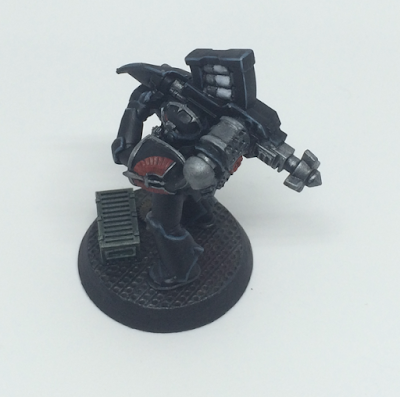 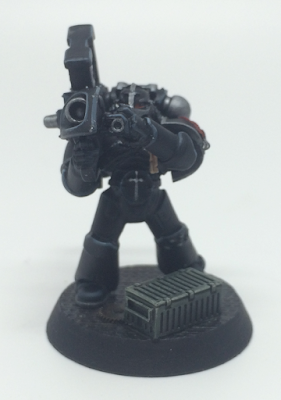 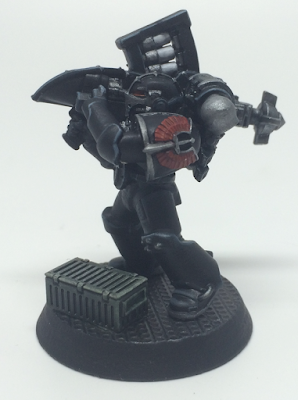 The test model has been painted entirely with Vallejo model and game color paints. I love the dropper bottles (I have need moving certain GW paints to these types of bottles, especially the Lahmian Medium) and the colors and coverage.

A predator tank and three Contemptor Dreadnoughts waiting the wings for my to practice a scheme for the vehicles of this force.  One day, these may be joined by Rhino transports, a 30K mark of Land Raider and possibly an additional support tank or two (Sicaran anyone?).

Until next post, Happy Gaming!
Posted by DAM at 11:41 AM No comments: