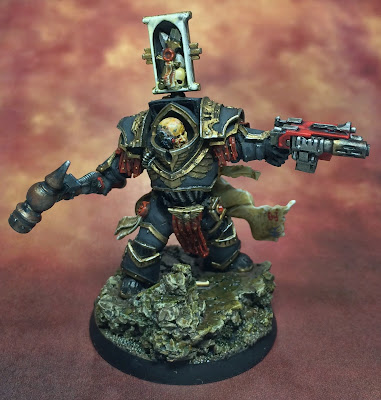 Below is the project break down for an Inquisitor model I worked on this month for a painting competition over on the Mengel Miniatures Forum. 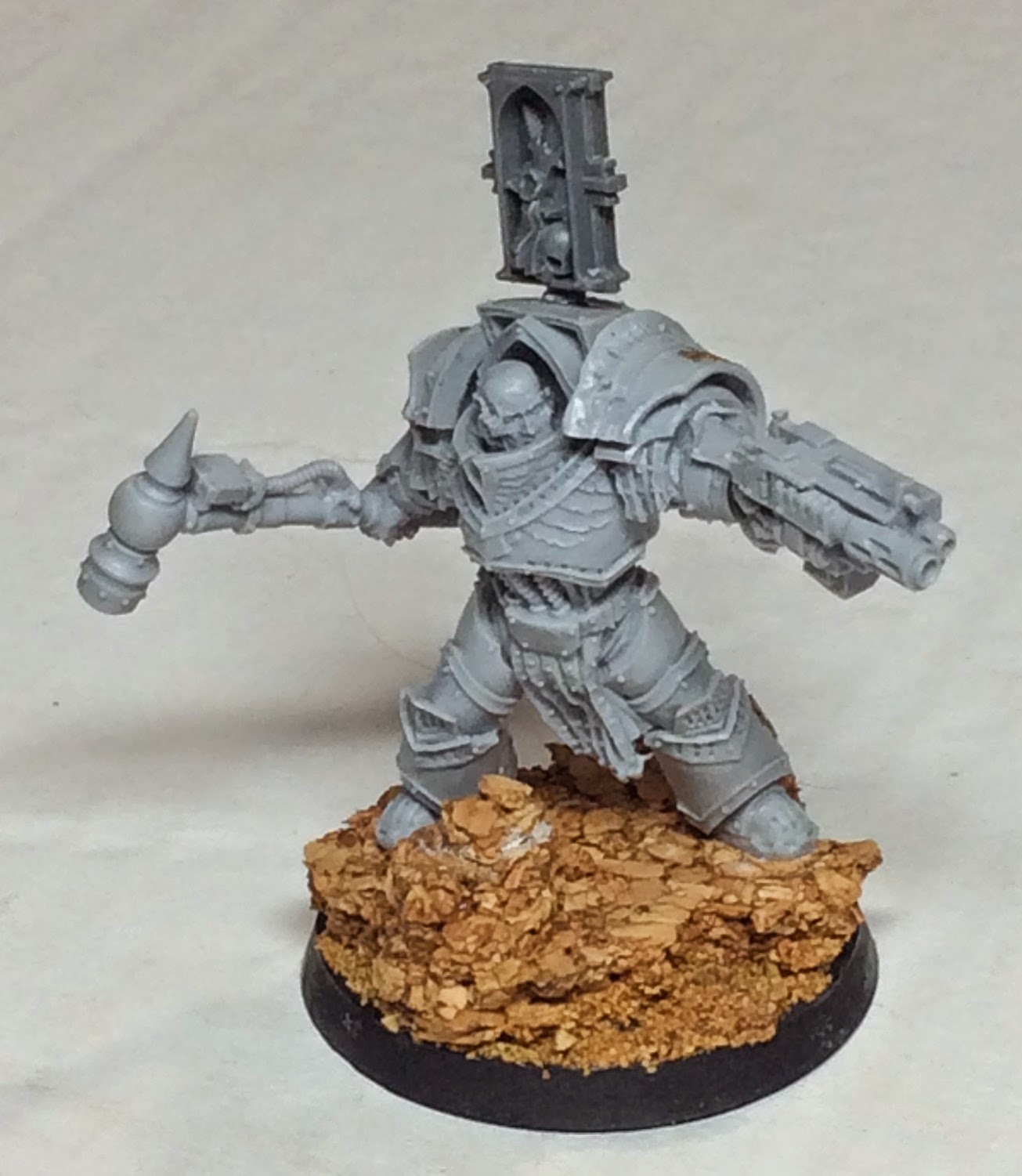 The Inquisitor was built from a Forgeworld Legion Praetor model with weapon swaps using parts from the Forgeworld Warhammer 30K line to represent a more antique and baroque version of a thunder hammer and combi-melta.  The Praetor model provided an older look for terminator armor. This all combined to give what I hope is a very different look from the standard 40k line.  After all, an inquisitor's kit is likely old and unique! 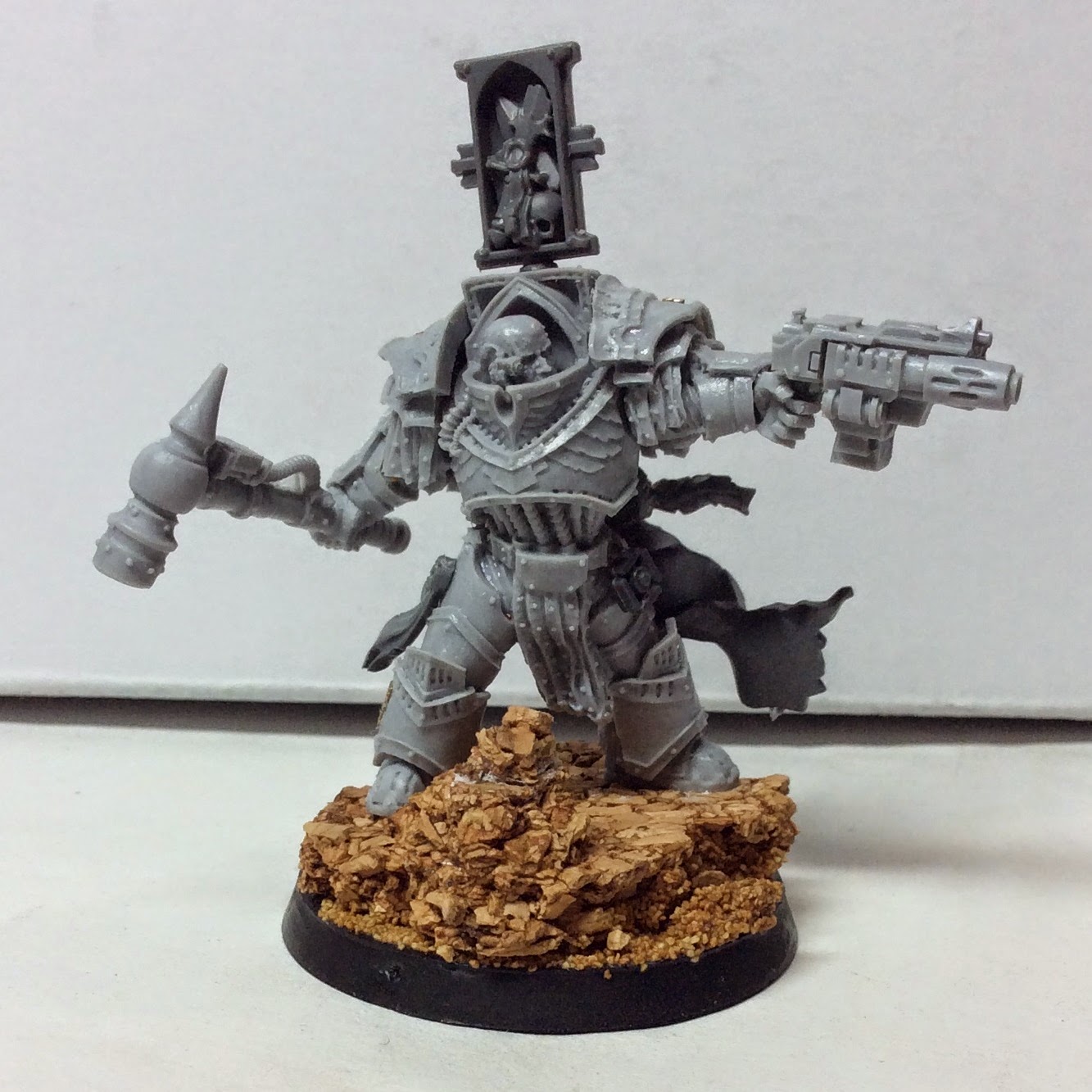 and from the back... 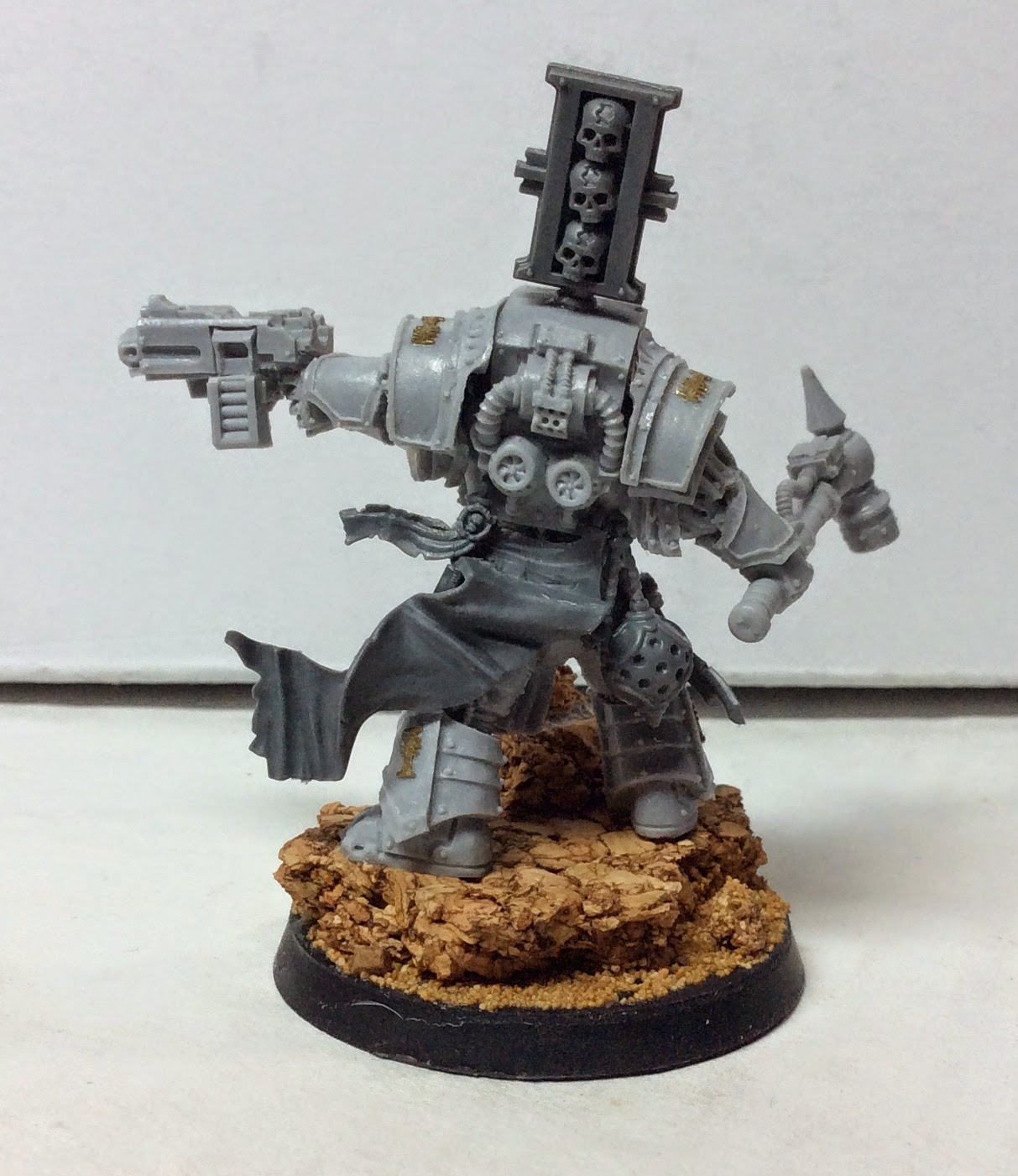 Next I airbrushed a coat of Vallejo German Panzer Grey surface primer over the whole model. Then the real fun began with the first painting session... 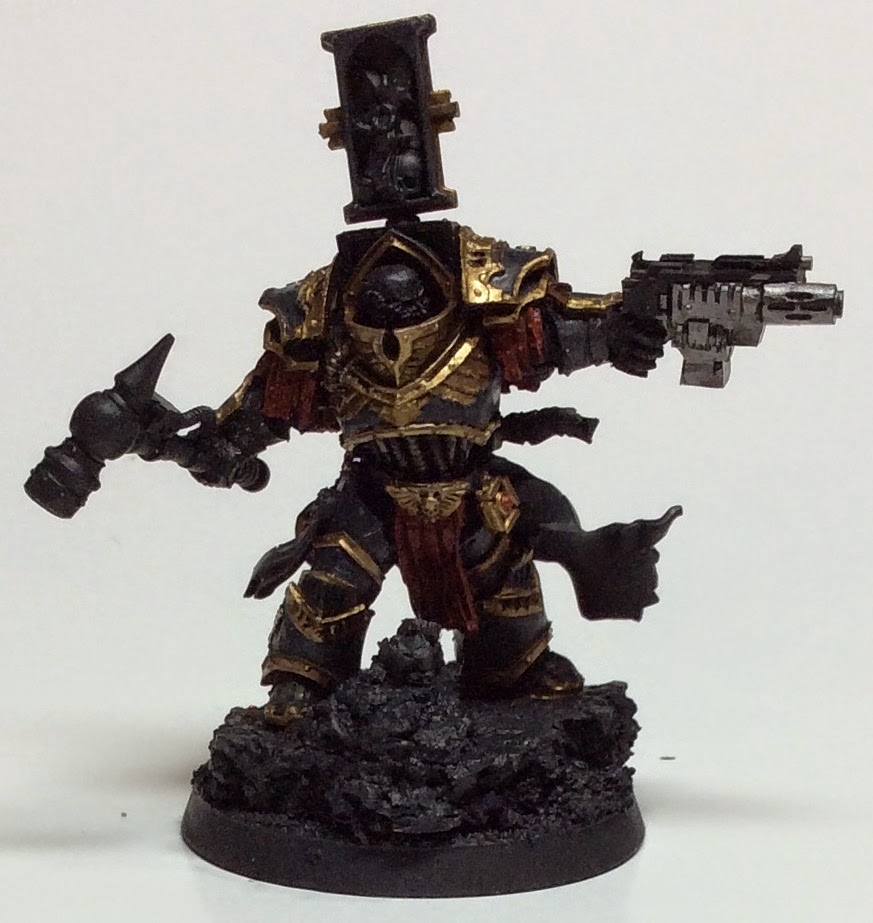 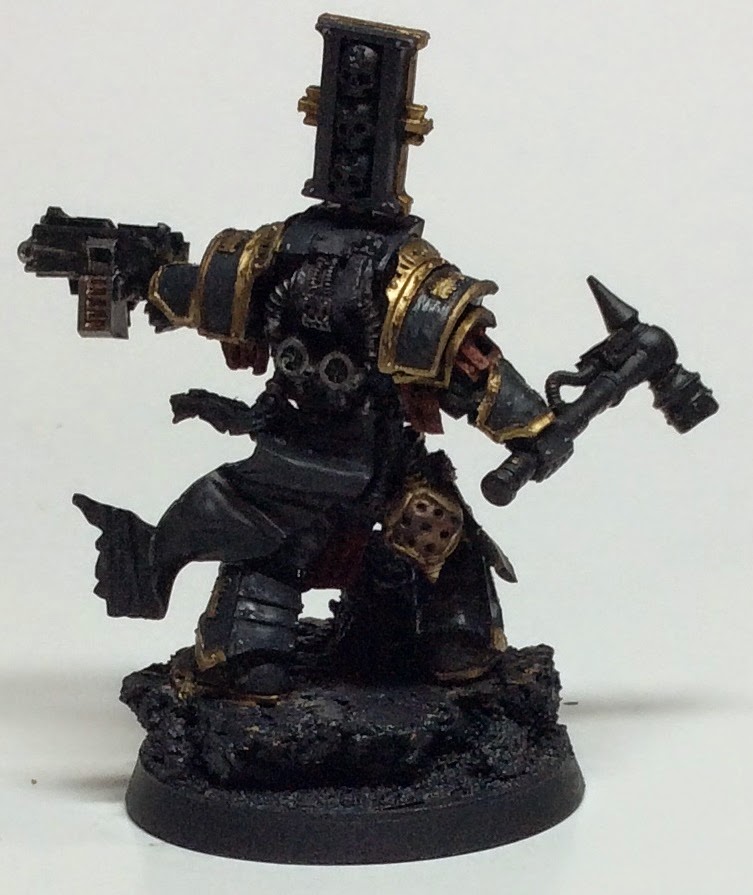 Trying some new things with the black armor that I haven't played with before...basically building up increasingly grey highlights, rather than starting light and washing/shading down with inks. Thanks to my mediocre photography and all the shiny gold, the subtleties of the black armor don't really show here.

During the next sessions I base coated and shaded most of the remaining model, except the base.  Some highlighting is applied and I experimented with text on the scrolls.  Not very happy with the text at this point so I may have to redo the scrolls... 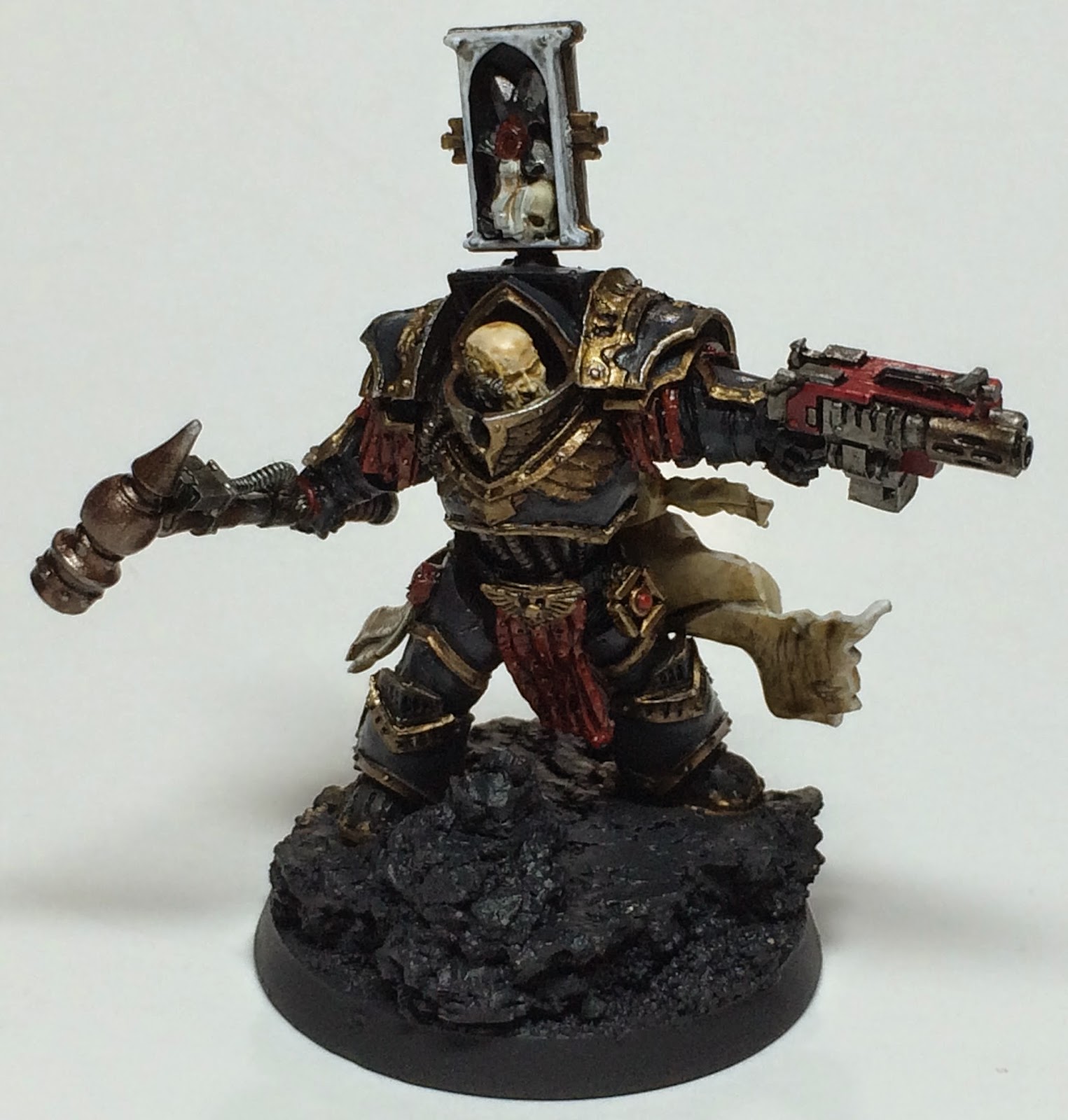 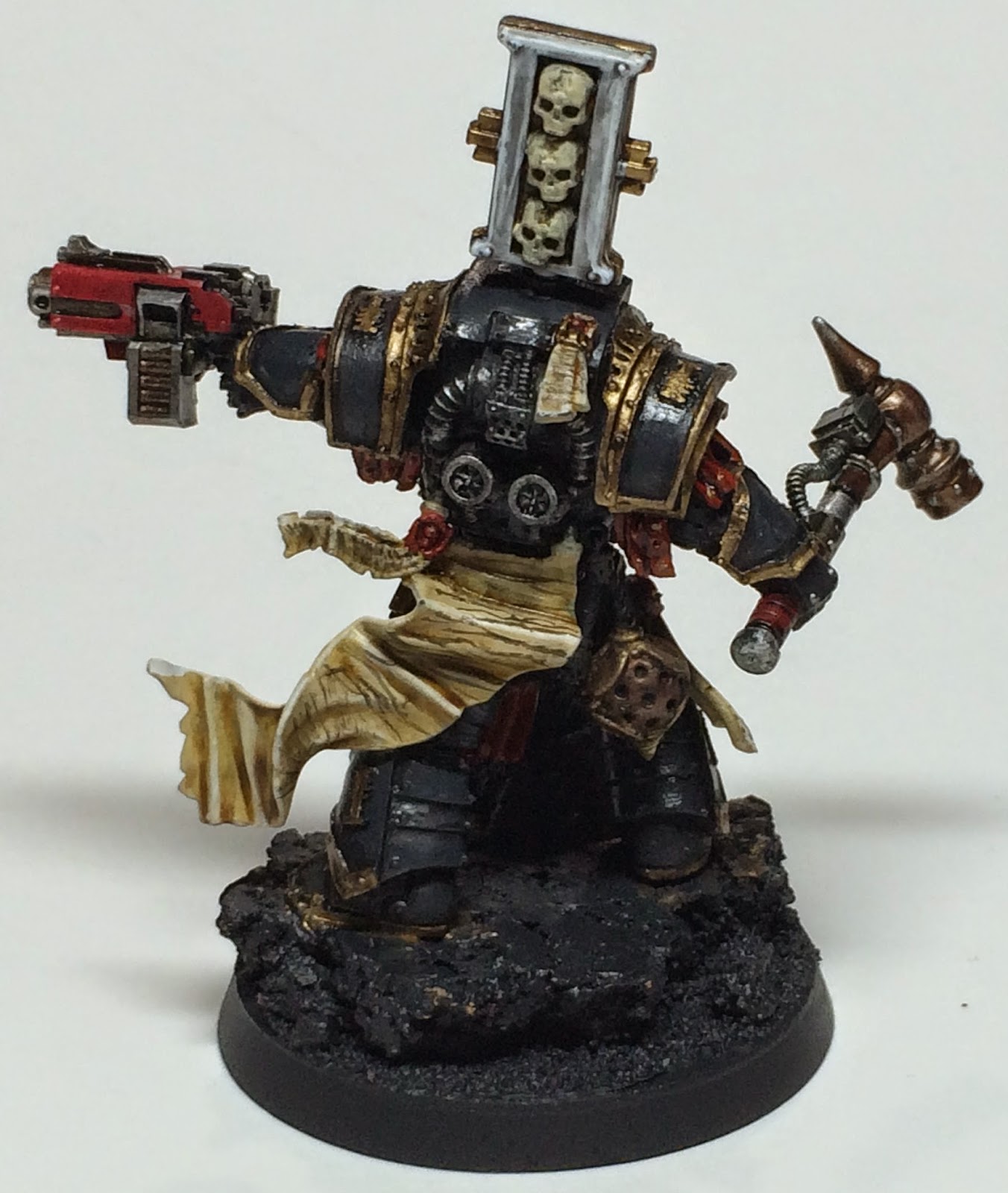 The model starts to come out looking like an Inquisitor now with more definition of the various areas of color and texture. I'm looking forward to the base which will be a mid-tone earth with light highlights to help the darker figure stand out.

Below I have made progress on the base, head and other details.  I could call this done at this point, but I expect I'll do a bit more.  I'm going to seal the model in a flat coat before completing the last detailing/cleanup.  Should be done soon!

I experimented a little on the head with some mottling to represent age spots.  Hadrian Russ is an old dude and more practically, I didn't want a large bald uniform head and simple washes weren't gettign me where I wanted the look to go.  I'm thinking he needs eyebrows, but every attempt kept coming out like a couple woolybear catepillars crawling over his brow...so I bailed...they were no doubt scorched off countless times and covered in scar tissue so they don't grow out any longer. :)

Oh, I added a couple spent bolter shells on the base to tell more of the story.  In my mind, the Inquisitor has just stepped from his ride onto the battlefield into the teeth of the fight, first opening up with his bolter and possibly aiming to fry some hard target with the combi-melta! 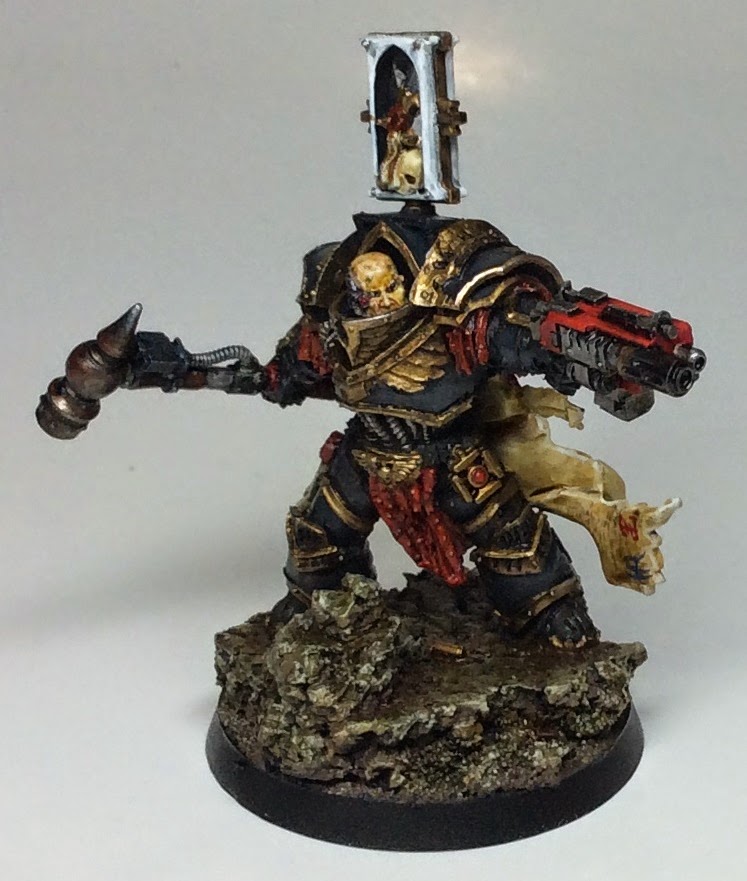 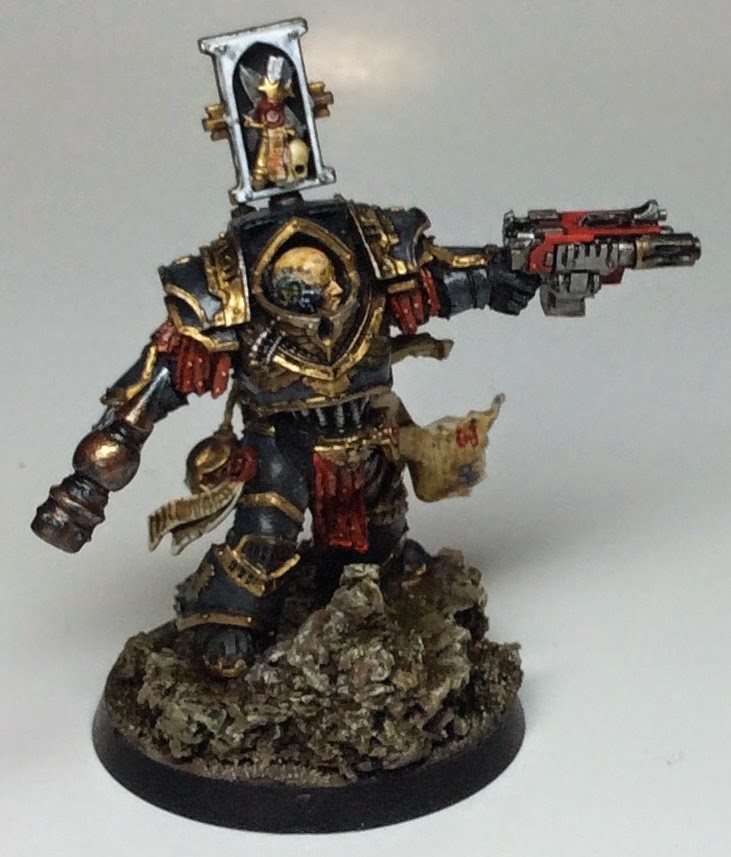 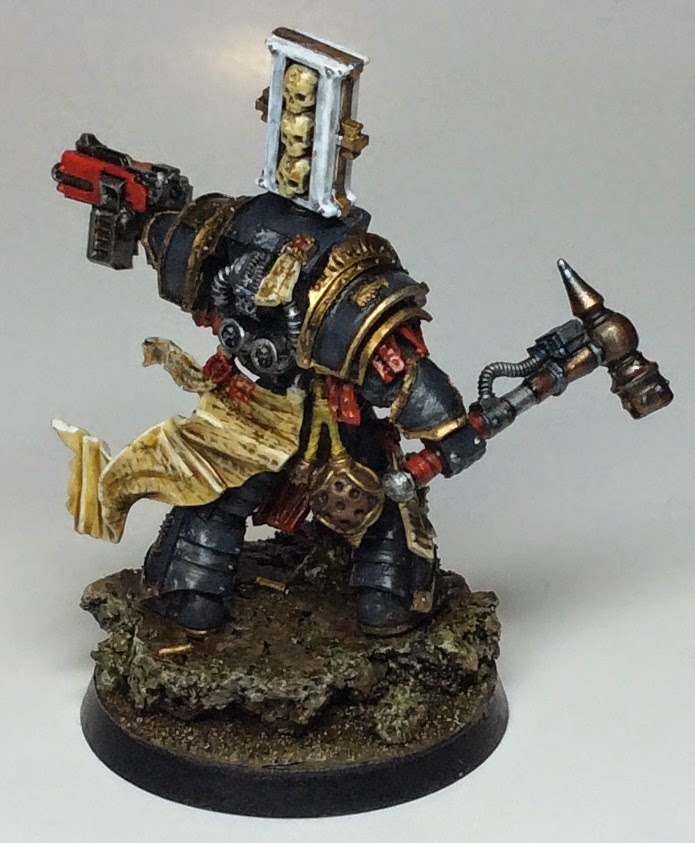 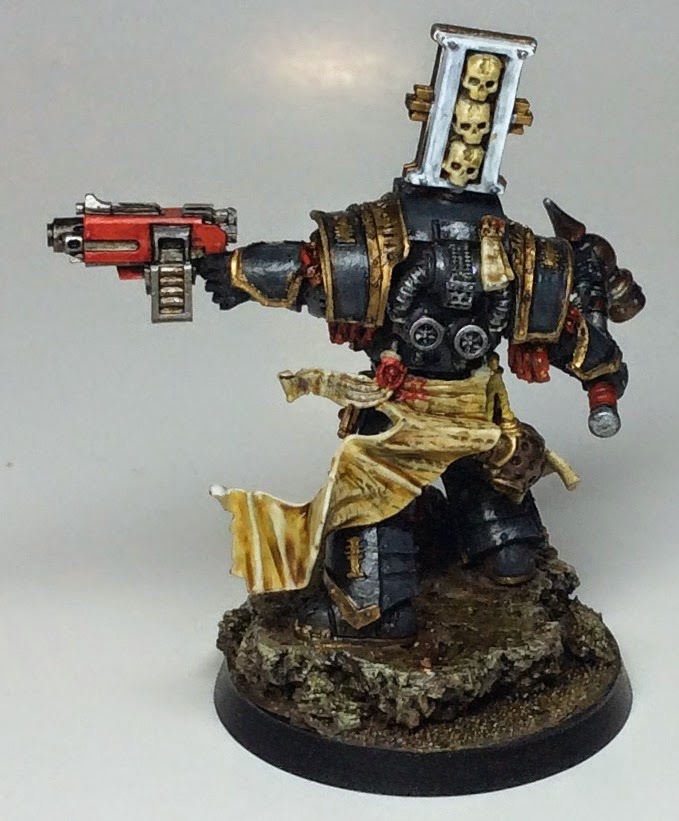 Another pass at highlights and shading.  We're pretty much on the last mile now....the model is complete as things go, but I haven't been able to give up looking for areas to improve. The flat coat varnish from Army Painter that I airbrushed on dramatically changed to look of the armor. For fun I started experimenting with backgrounds other than white as well... 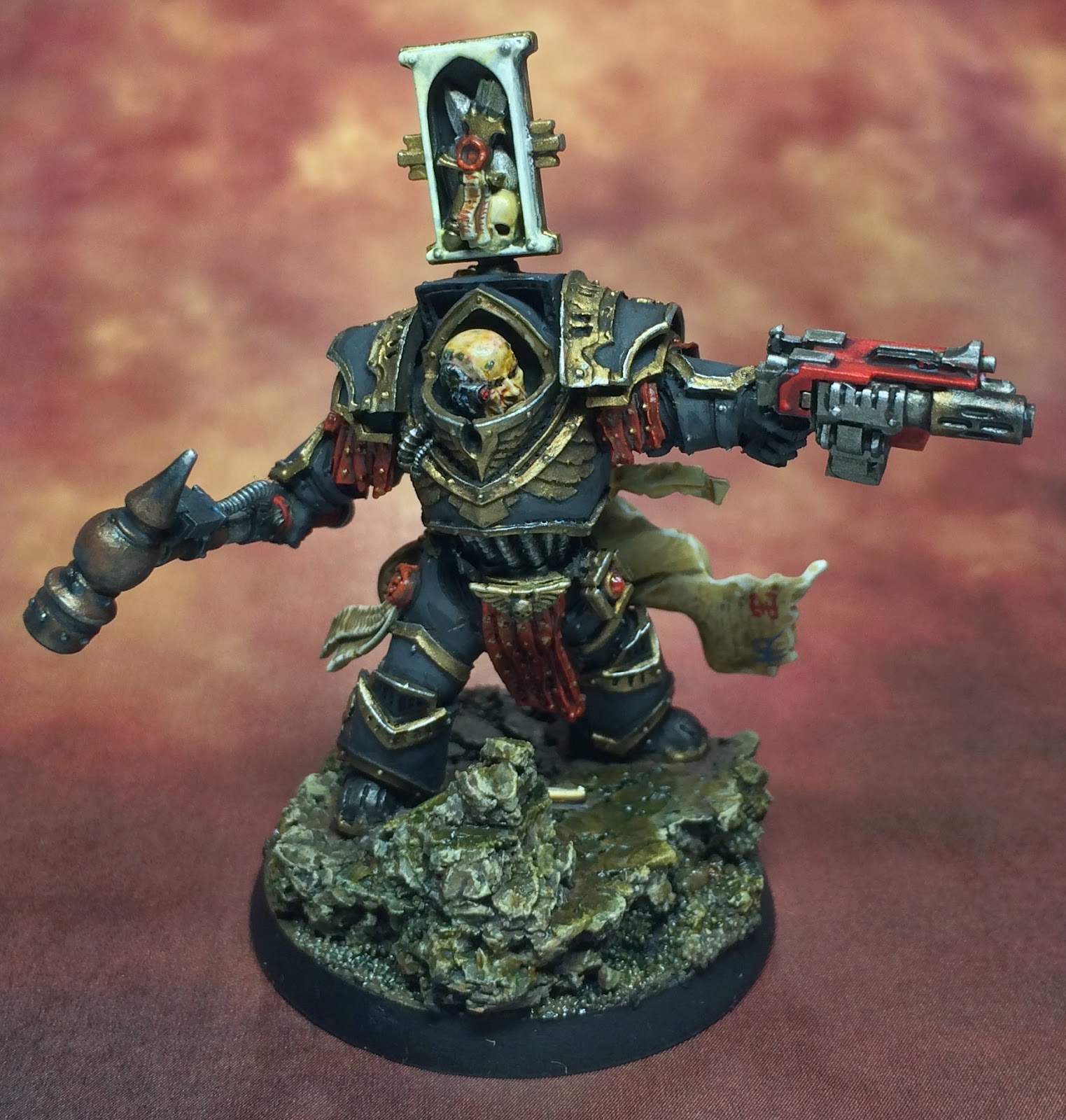 Following some advice I dulled down the red of the combi-melta so it doesn't stand out quite so much and draw the eye away form the Inquisitor's head and face.  Here is the final set of images that will be submitted for the contest. 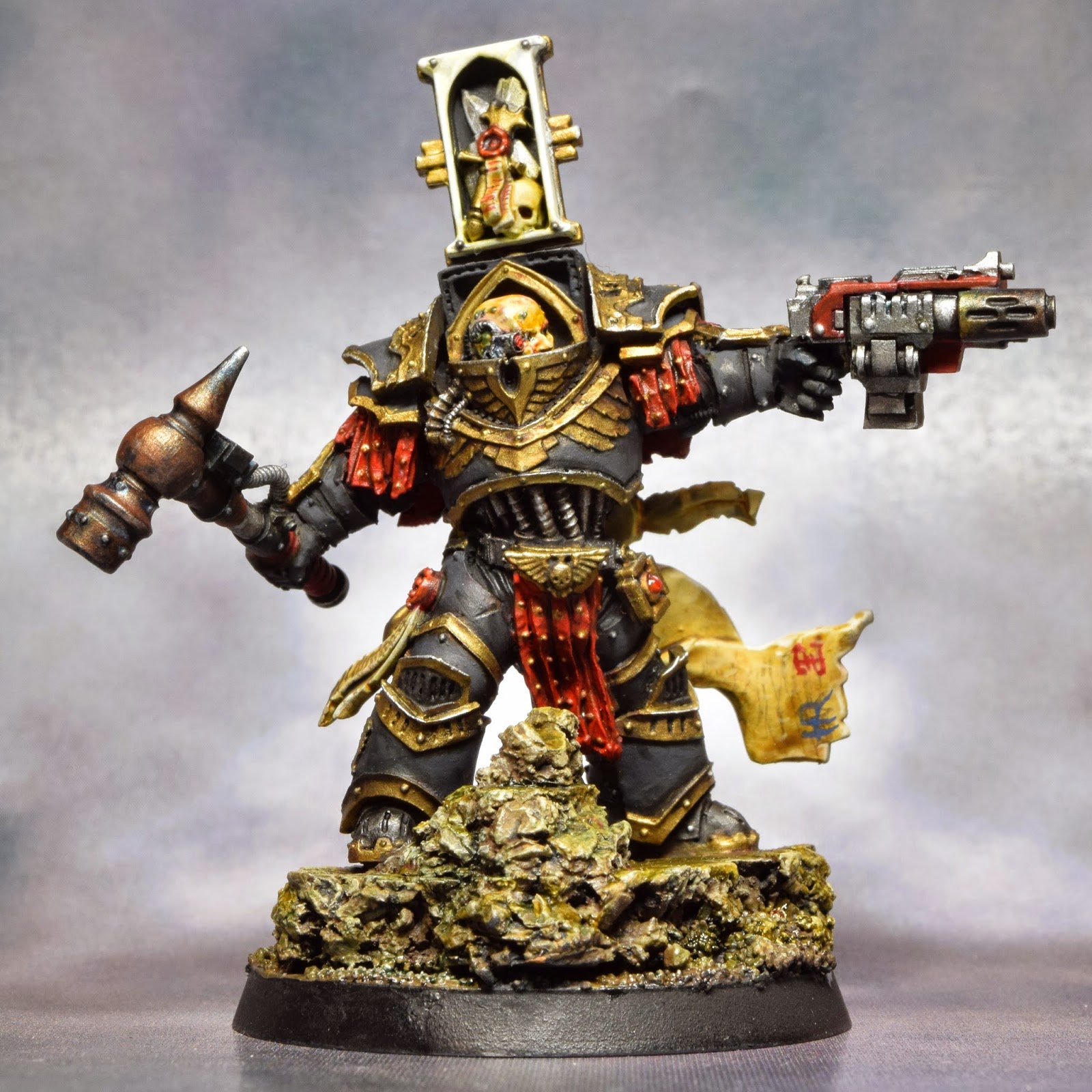 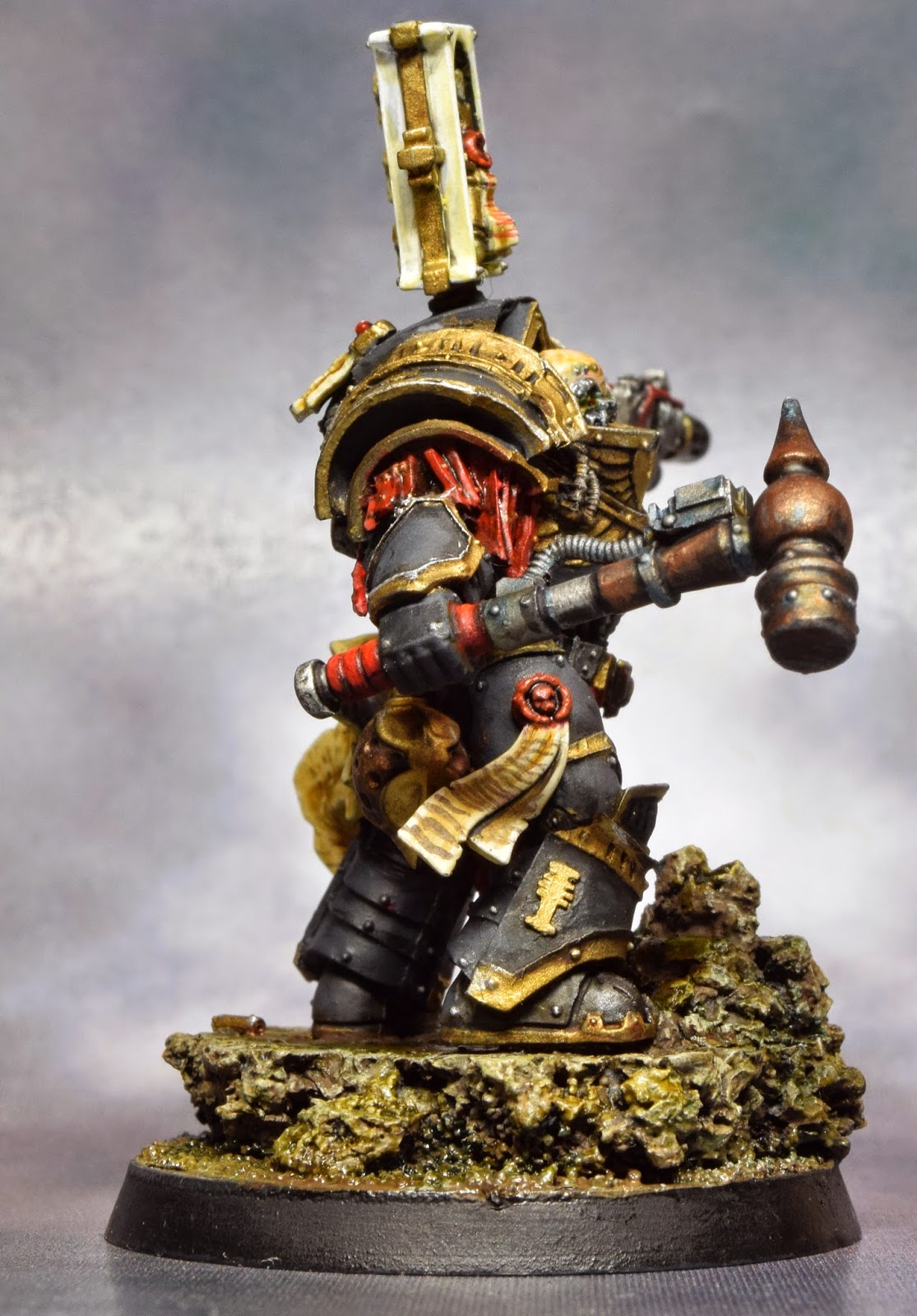 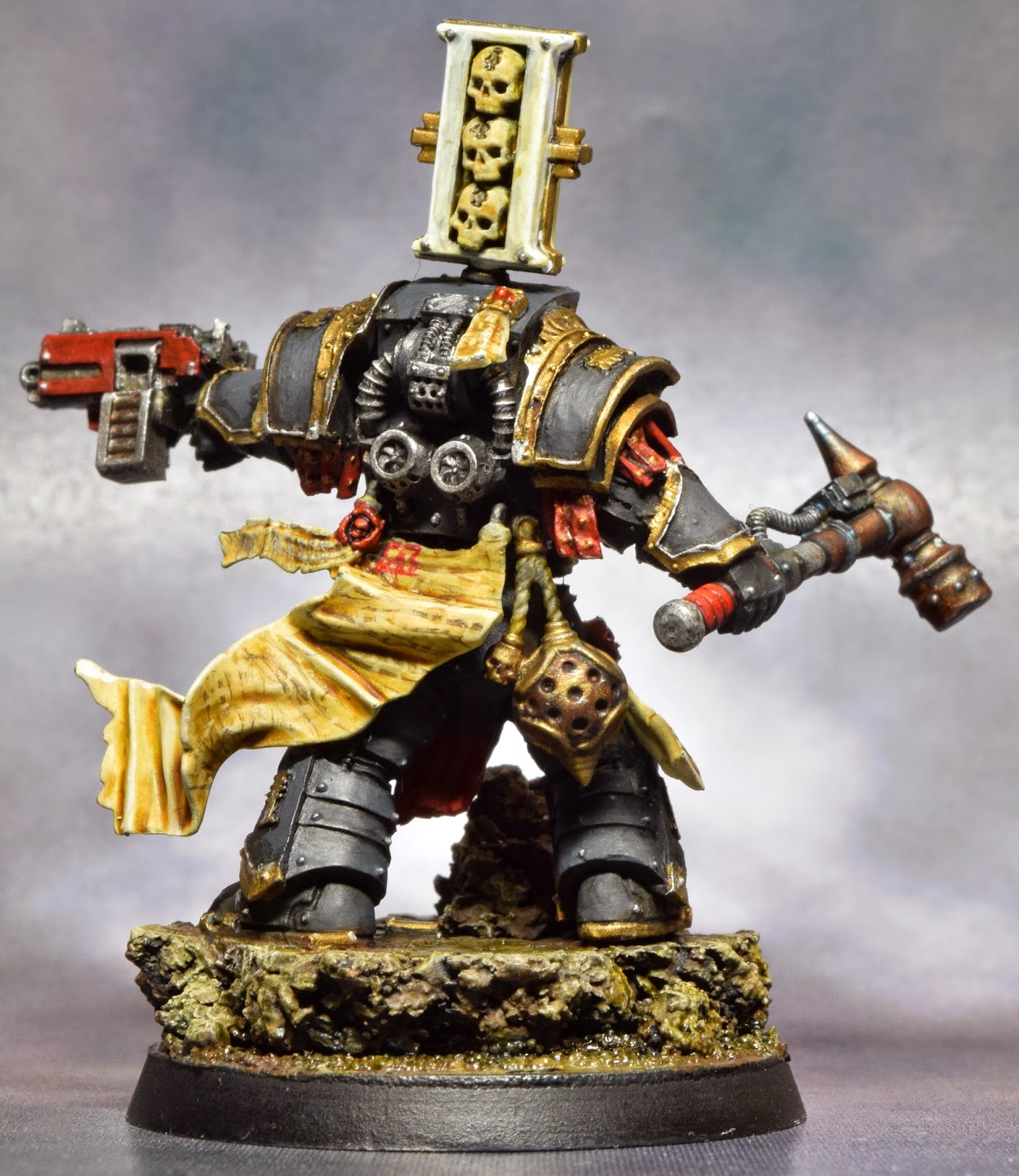 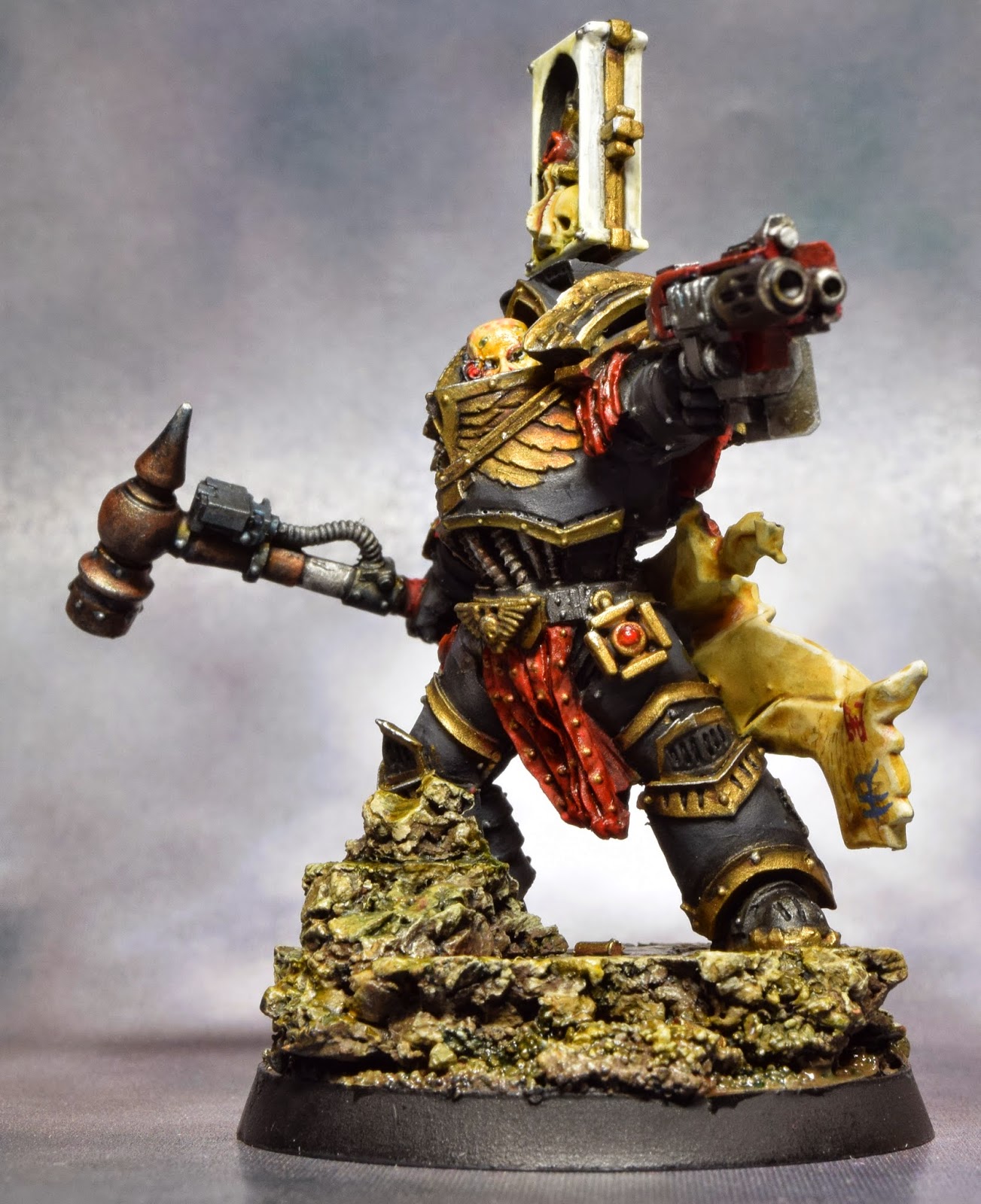 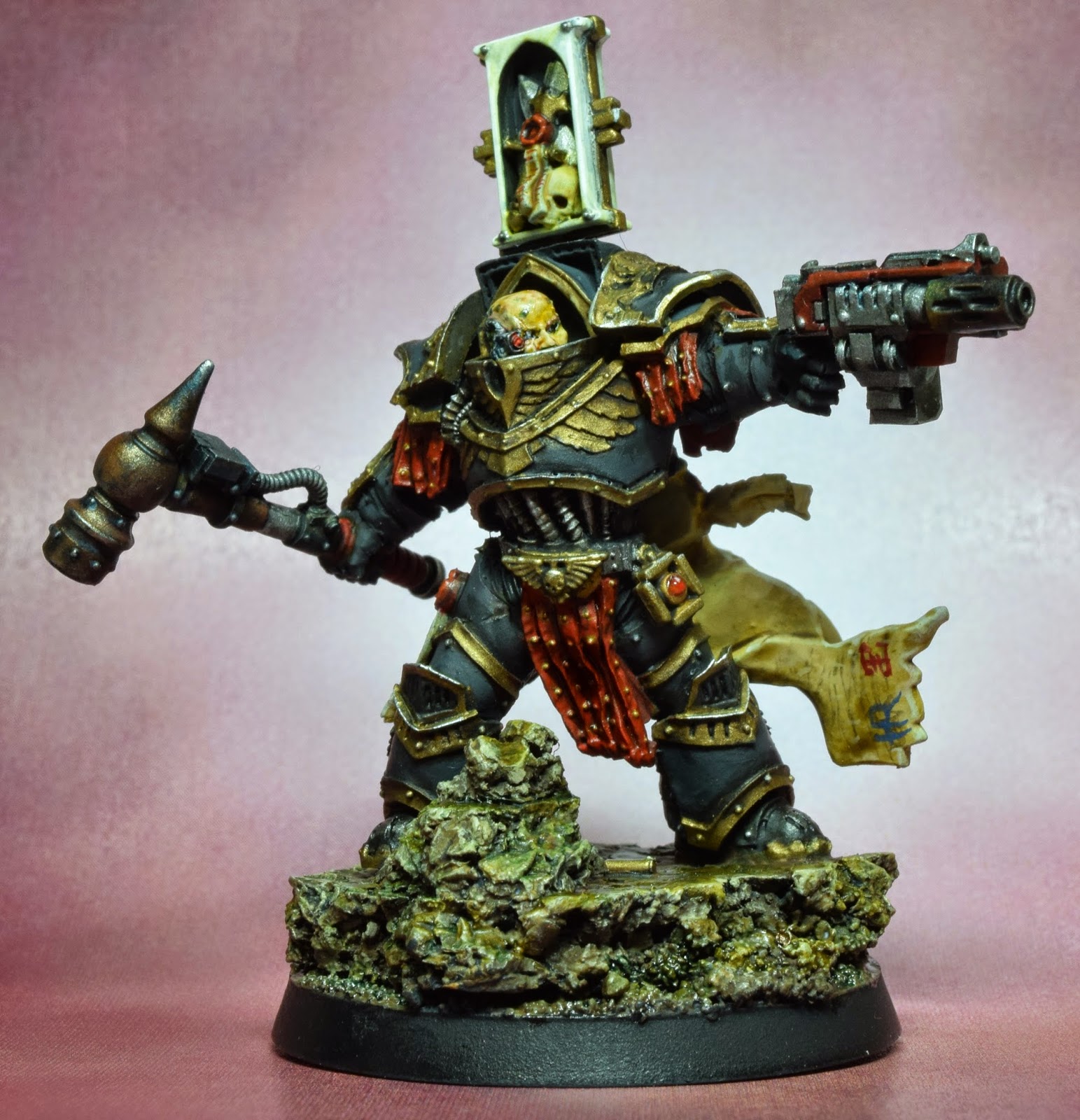 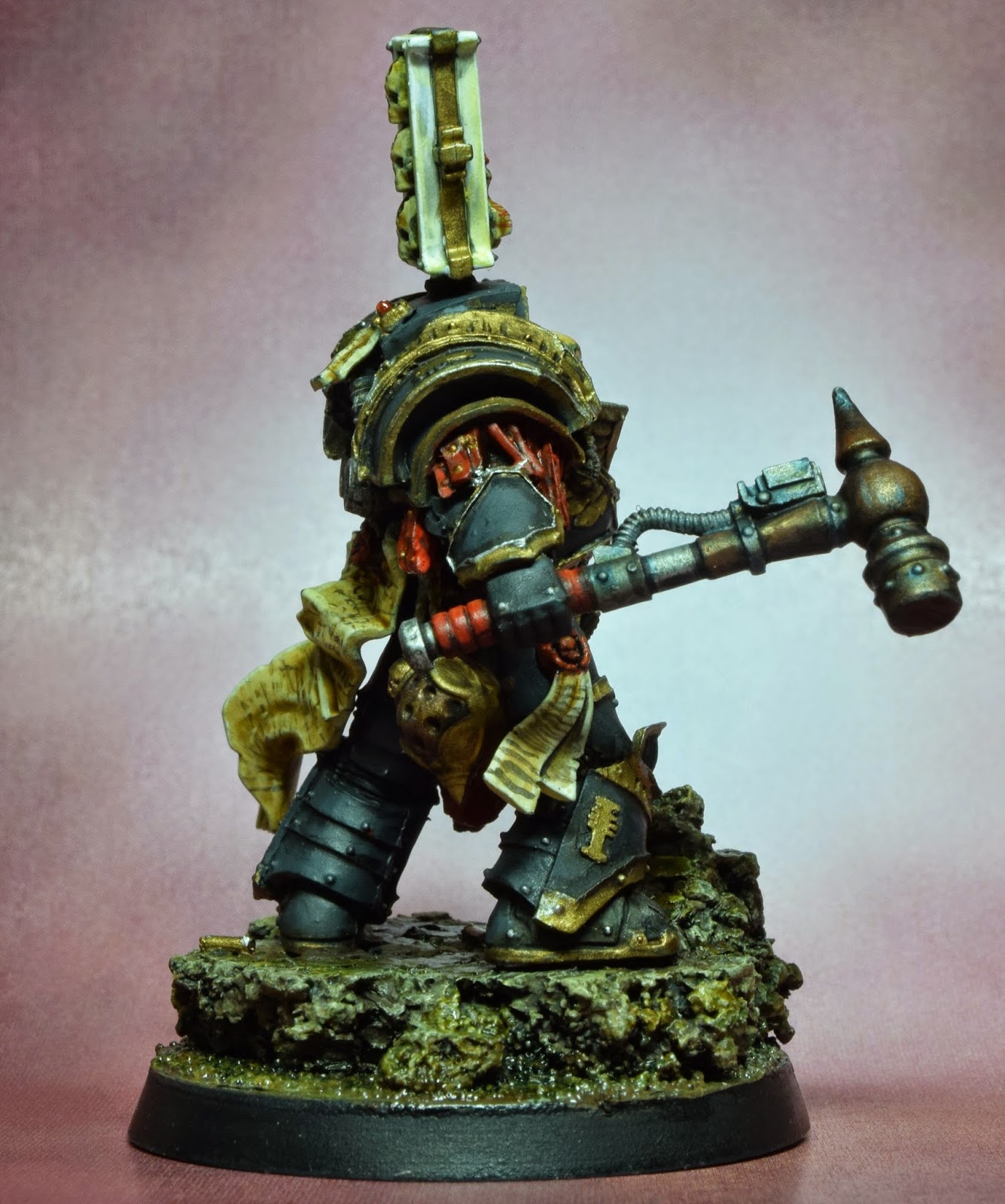 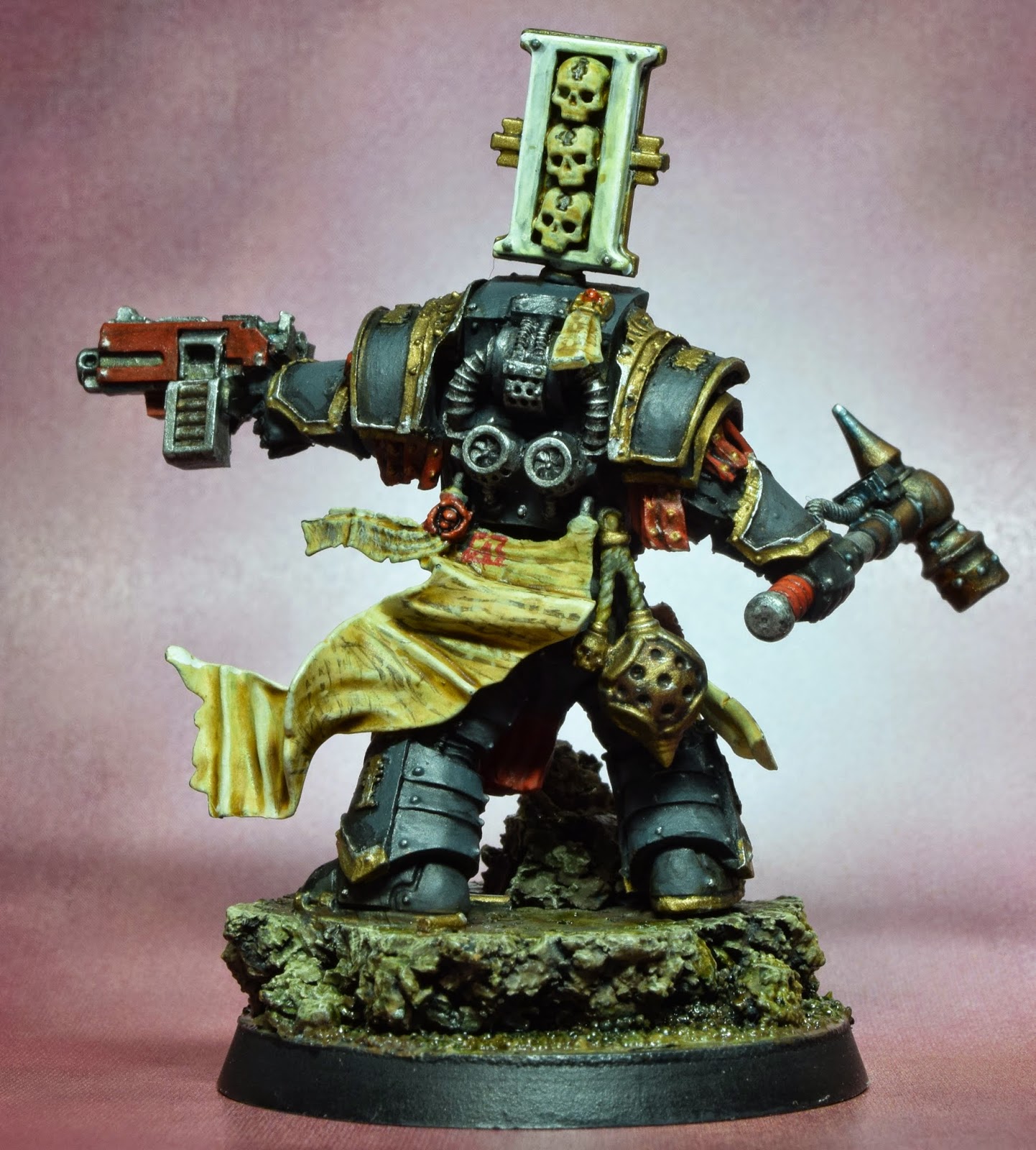 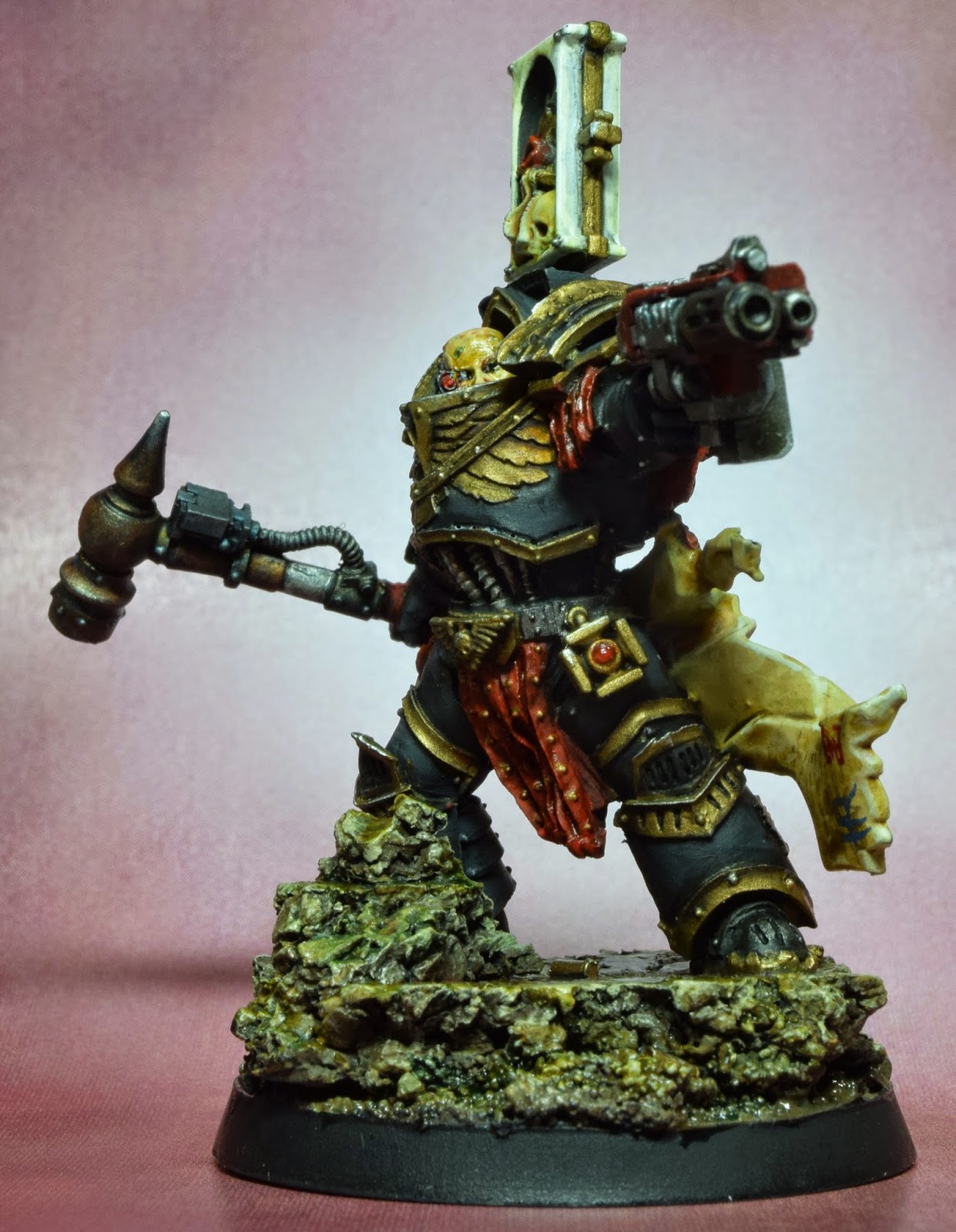 All in all a very rewarding project.  I have been thinking about and planning for a custom inquisitor model for a long time.  I have enjoyed the project and the chance to really explore my painting skills and try out some of the stuff I've been reading and thinking about. 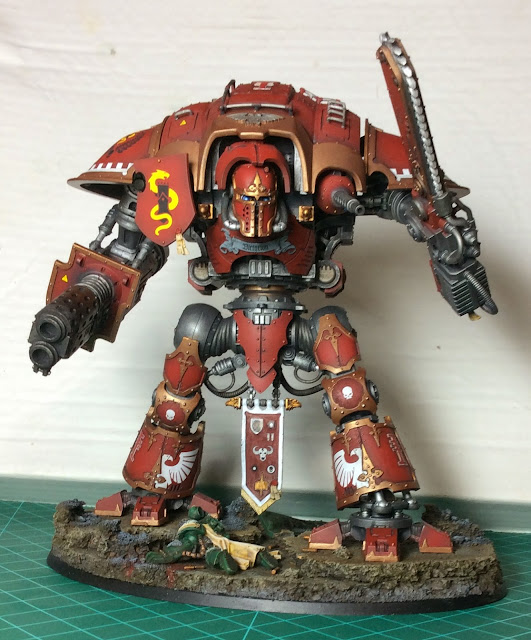 I have loved the Imperial Knight kit since it released, and have sat on two boxes just waiting to decide how I wanted to build them.  In then end, I decided on building both as freeblades: one Knight Paladin and one Knight Errant.

The Knight Errant is up first.  In thinking about a background to fuel my build, I settled on reinforcements for my Grey Knights and Inquisition forces.  The Knight Errant would be aligned with the holy Ordos of the Inquisition, service the Ordo Malleus directly to atone and forestall a sentence of exterminatus.  The backstory in simple form:

A detachment from house Krast was involved in an action against Chaos alongside the Astra Militarum and a force of Grey Knights.  The battle raged on until it became clear that only exterminatus would protect the Imperium of Man against the taint and influence of Chaos.  Astra Militarum elements in the field along with all but one Imperial Knight involved were caught up and destroyed in the Exterminatus ordered by the Inquisitor in charge of the overall action.  The world upon which they fought was reduced to a cinder of barren rock in moments.

Under guidance from the Grey Knight Brother Captain involved, the Inquisitor spared a single Imperial Knight whose valor in the battle and commitment to the total destruction of Chaos was undeniable and cried out against the ultimate sanction.  The spared knight was the only survivor of his detachment and had witnessed such horrors that summary execution was the only acceptable action by Holy Order.  Knight suits and their valiant pilots are a rare asset in the fight against the Grim Darkness, however.

So it was that under Inquisitorial mandate and the threat of exterminatus the Knight was ordered to renounce his House Krast affiliation and vow service only to the Inquisition where he would live out his remaining days of atonement in service to the Ordo Malleus.

The knight was permitted to retain his battle honors, along with token markings of recognition for past commitment and service to the Mechanicum with which his house is allied. In these the knight would not lose honor for accepting this new service over death.  The knight maintains the serpent clasped by a gauntlet as personal heraldry in recognition of an honorable past and to signify his commitment to ending the threat of Chaos in all its forms. The addition of Inquisitorial regalia of course signifies service to the Inquisition and the eagle is maintained to show loyalty and service to the Emperor over all.

Fluff aside, here are some shots of the Knight in progress, starting with the base: 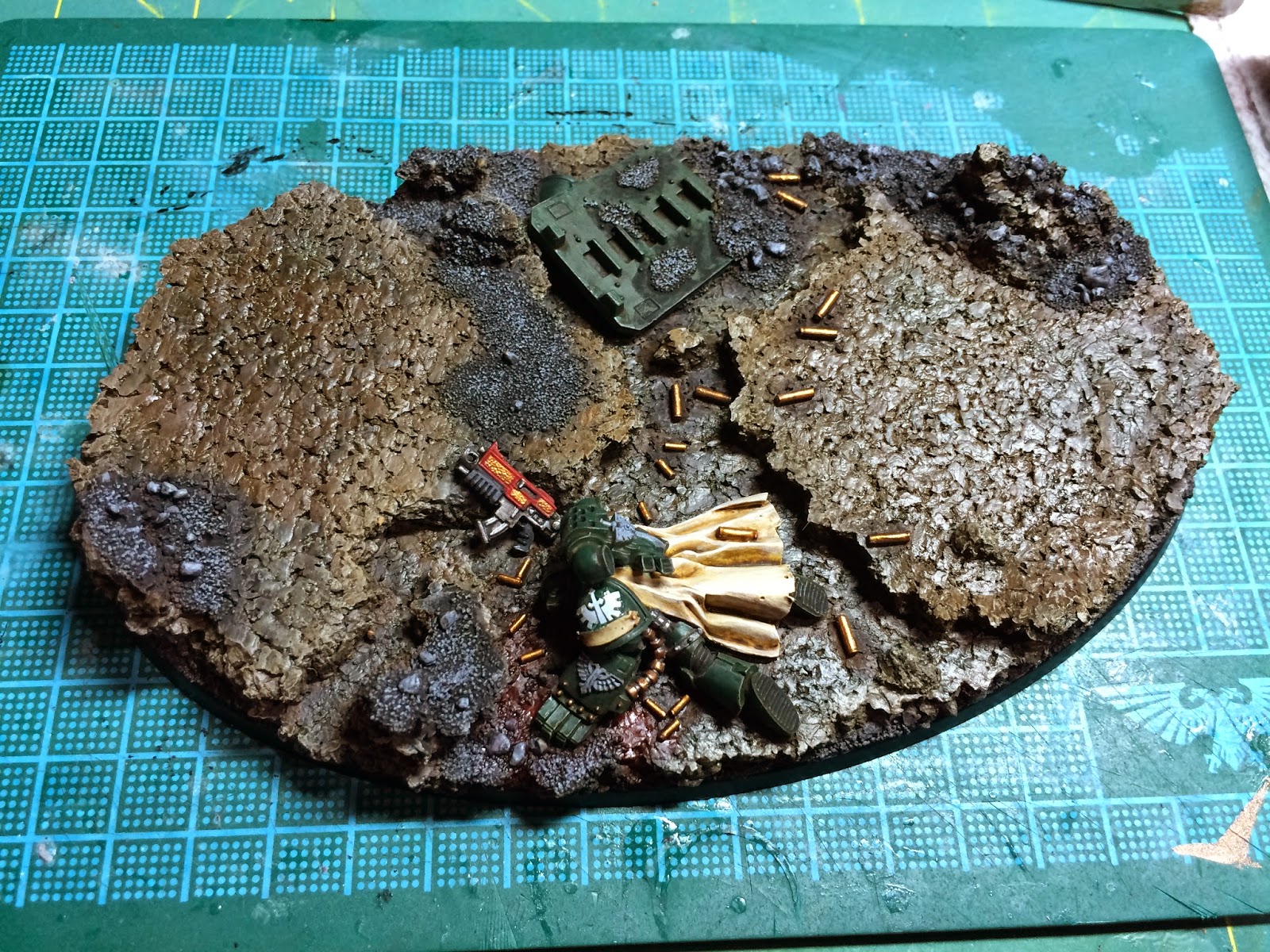 A resin Space Marine casualty from the bitz box was painted up as a wounded Dark Angel in honor to my existing Dark Angels army and placed as if the knight has stepped up to defend the fallen warrior.  Close inspection will reveal small casing from the bolter and larger casings from the heavy stubber of the Knight Errant.

And now an early shot of the Knight on the base: 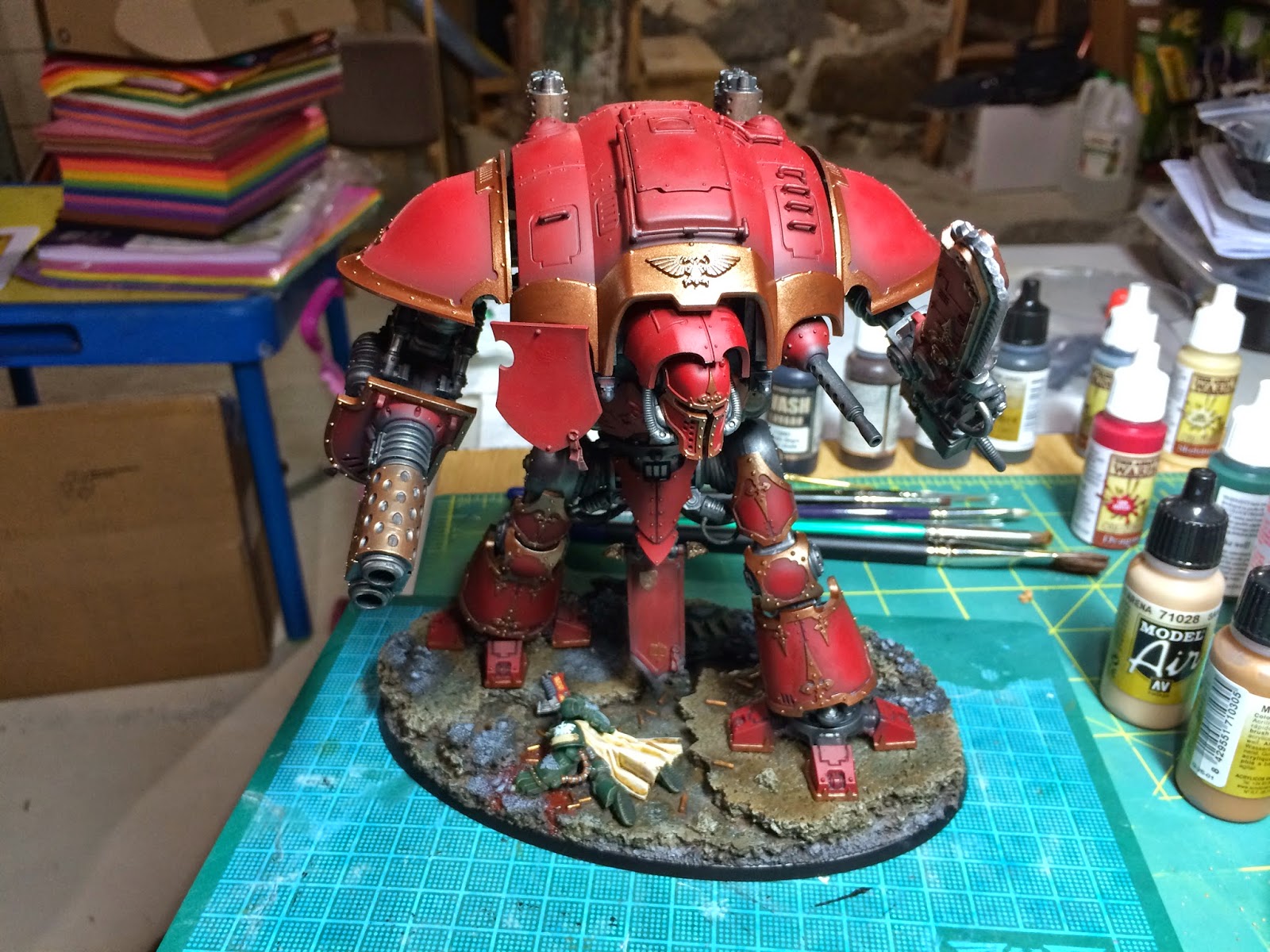 The Knight is airbrushed various reds from the Vallejo model color and model air lines. The rest is brush painted.  For this project I am using mostly Vallejo paints with some Army Painter colors, primarily for metallics and the Dark Angel.

Here is the model attached to the base and with decals applied.  Both weapon arms need a lot of additional work and I'd like to take a hand at applying weathering powders to gain some experience there. 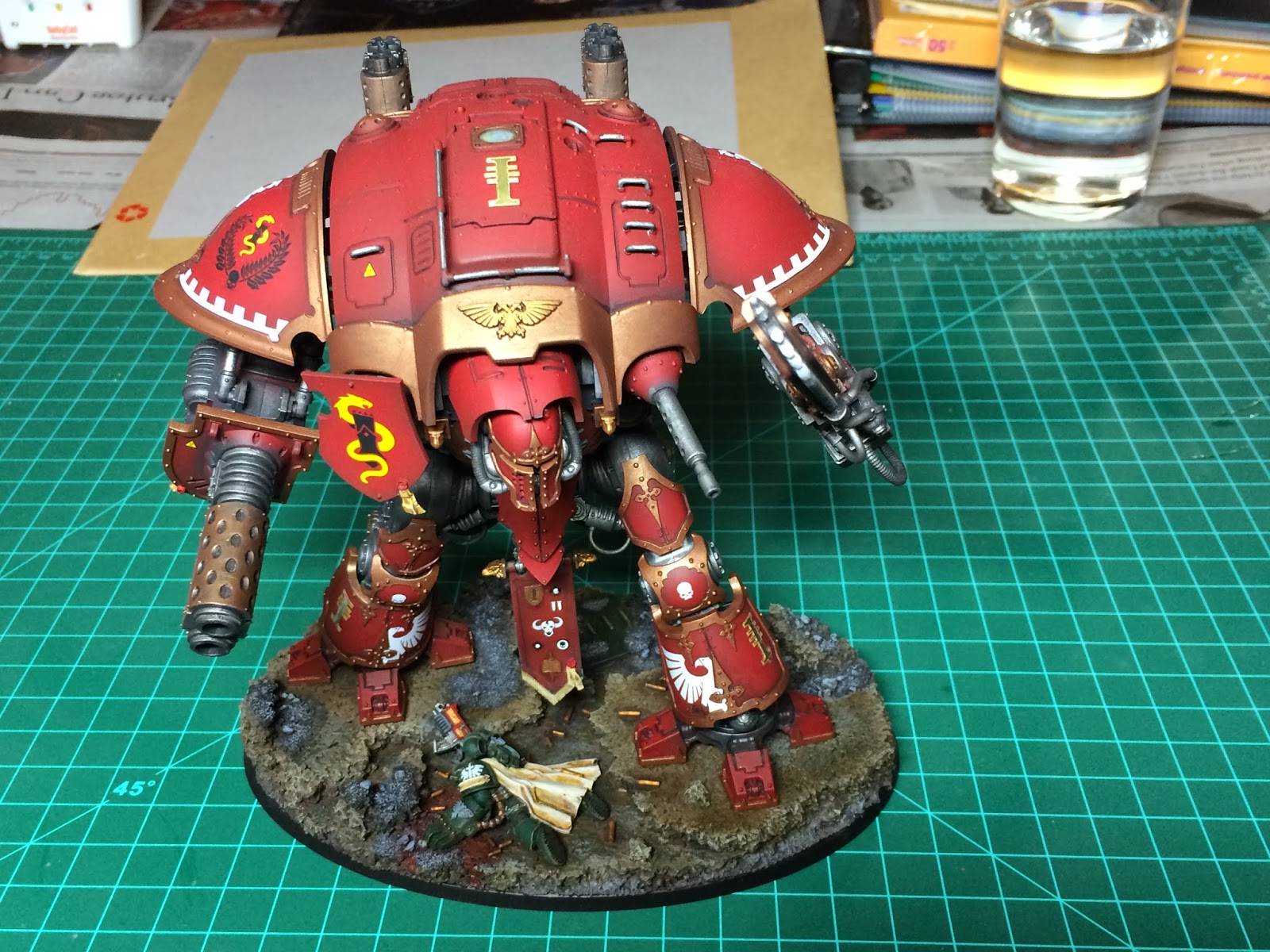 Here is a front and back shot of where the Knight stands today.  More highlighting and shading, plus painting on the Inquisition icons. 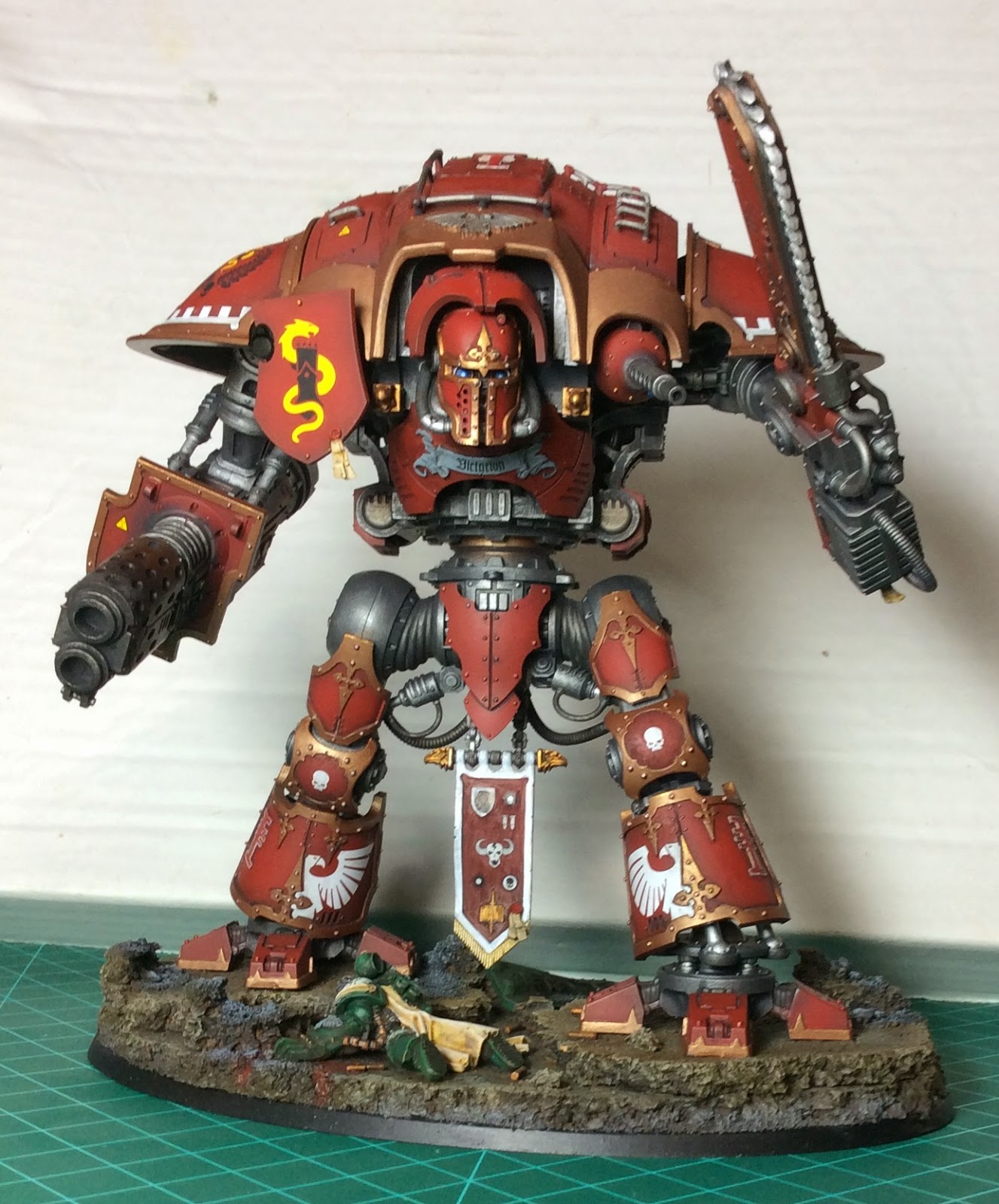 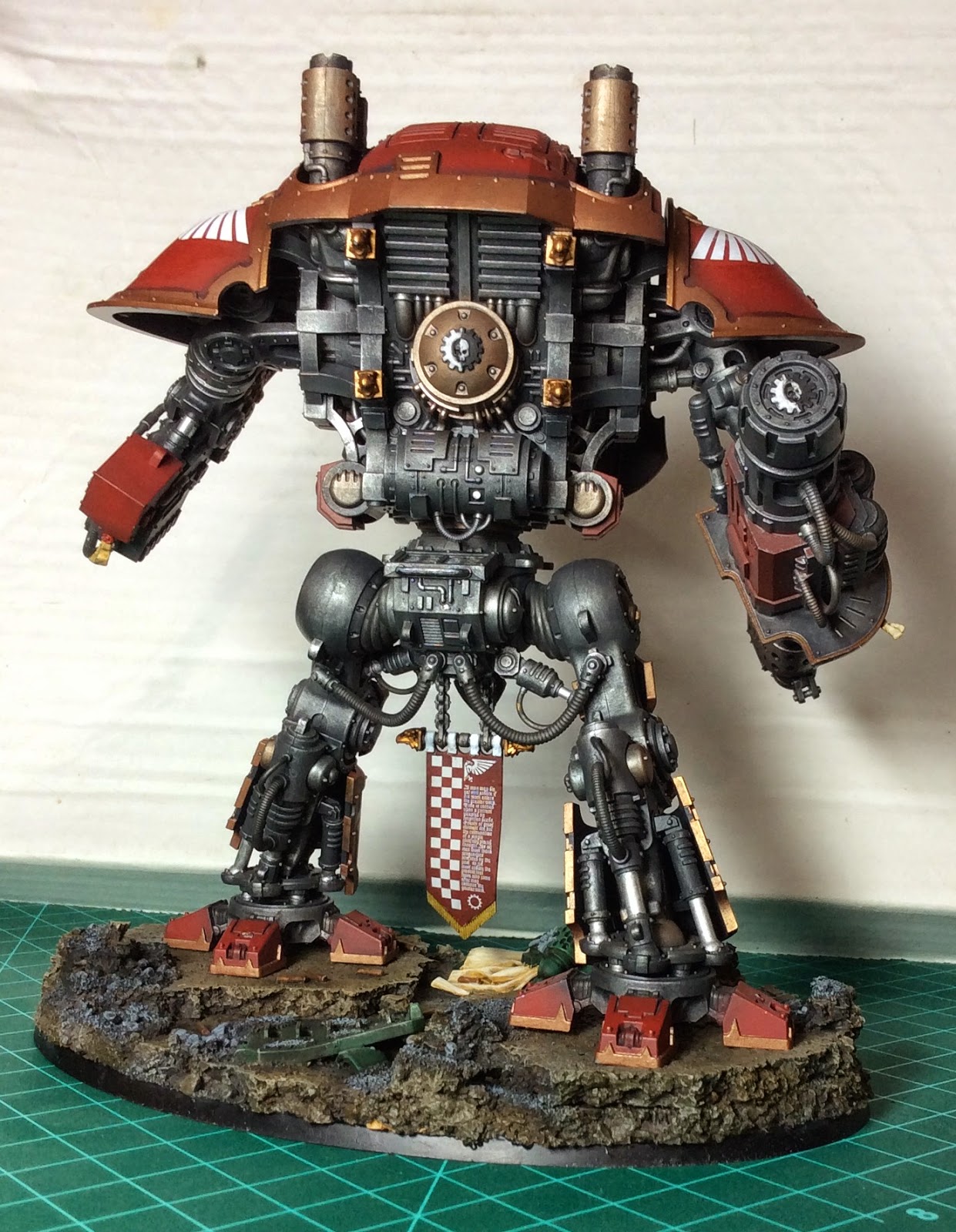 And lastly a couple details of the work on the upper armor, and the main weapon arm where I am experimenting with heated metal looks... 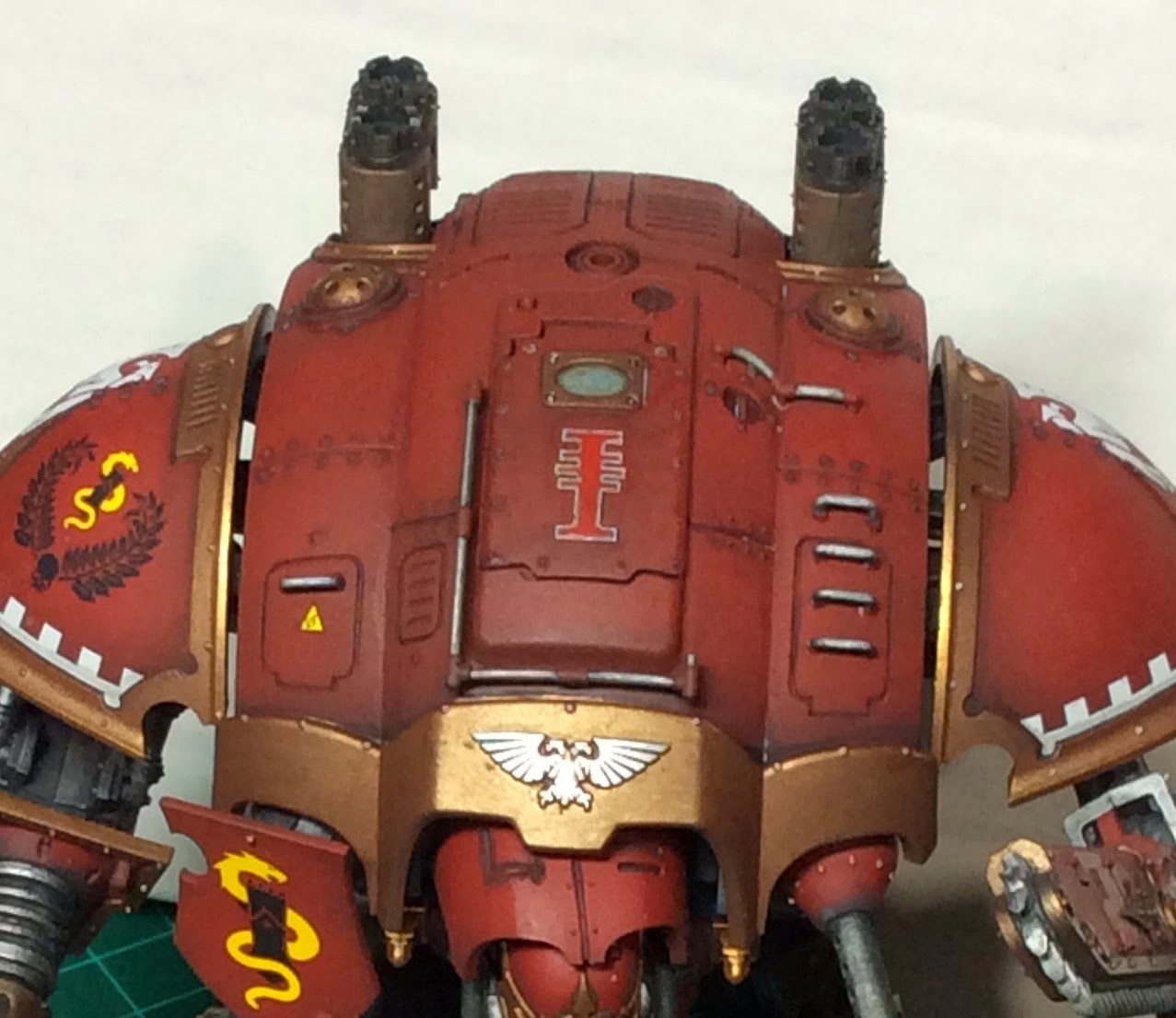 and a close up of the muzzle in progress... 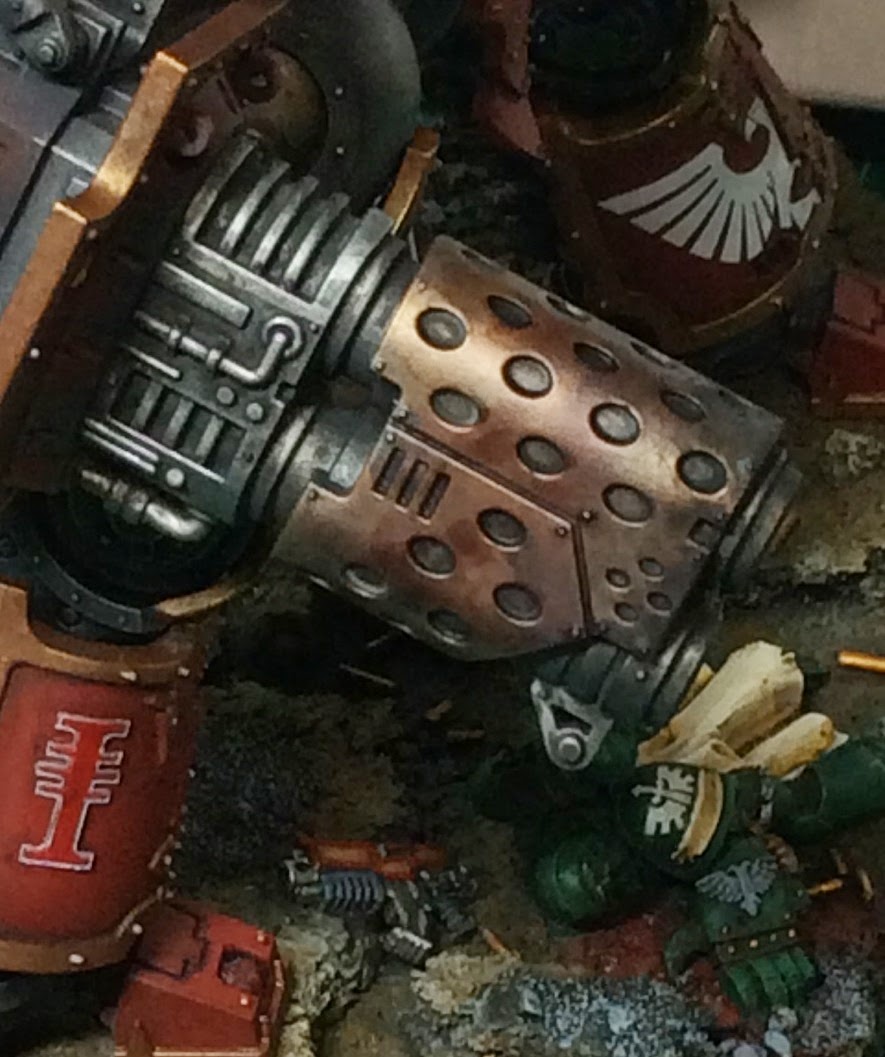 This has taken several months to complete but it has been worth it and has provided a nice distraction to my new duties as father of two girls (a new baby and a toddler).