I have been quiet here in the blog for a while, but not so at the work bench.  I have been busy clipping, cleaning and gluing elements of the new Sector Mechanicus terrain for Shadow War and finally reached a point where I was ready to start putting new tiles together for my gaming table.  In order to base and theme my table top terrain, I prefer to put everything on a tile, 12"x12" squares of 1/4" birch plywood in this case.  I have revealed portions of my Sector Imperialis terrain already, and the new Mechanicus stuff is being assembled to match so everything fits interchangeably on the table top for games.

I love the Shadow War Sector Mehcanicus terrain!  My only complaint is that I could use TONS more of it. :)  I had a modeler's form of writer's block where I became paralyzed by the need to sort out the PERFECT arrangement of terrain for the Mechanicum bits. Finally, I reached a point this week where I threw down the gauntlet and just got stuck in making cool stuff. 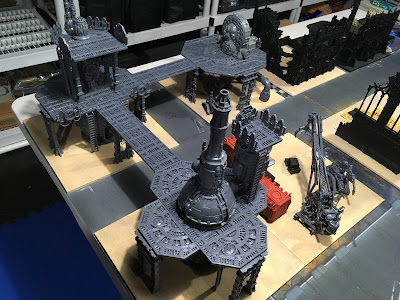 I decided to put together four new tiles, to start.  Three with buildings and one using the crates and crane bits as a heavily themed industrial piece.  For the buildings, I wanted to have some height, lots of cover and interest for Shadow War games. In the end I compromised on height with only two of the tiles having three levels, and the other just two levels. The shot above is one possible arrangement.  I assembled two independent walkway pieces that can be used to join the three builds as various pre-arranged mid-tile points.  I have held off attaching all the walls and hanging down bits of cables and cranes. I want to be sure I'm settled on the buildings before finalizing their decoration. 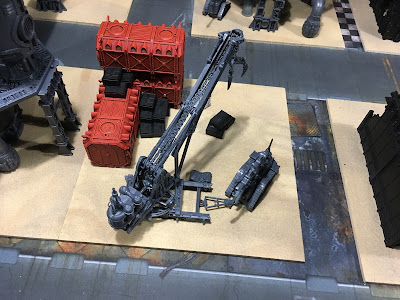 The tile above is an experiment, so nothing is glued down yet. This is random cover with some elevation options provided by climbing the crates onto the containers.  Good objective possibilities on this tile as well, I thought!  Not sure how it will come out in the end as I'm still bouncing around ideas.  I have three remaining crates to consider and lots more promethium pipes and barrels... 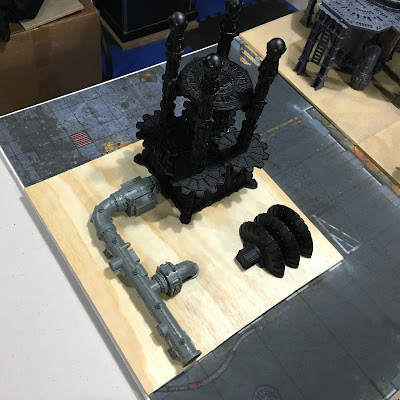 I'm not one to play much with terrain models as part of my army selection, despite the available rules.  I prefer these pieces as themed terrain in my collection.  To that end, I began fleshing out a piece using the Void Shield generator.  This is another tile that could be used for objectives, or just plain fun as a themed piece in the cityscape.  As seen above, I'm exploring a possible use for the Secret Weapons Miniatures power generator pieces I've had forever.  They have been waiting for that "perfect" project. Hah!

Here are some shots of everything I have in my latest terrain set for the table top in one possible configuration.  I have been very much looking forward to a table with a mix of Manufatorum/Mechanicus elements at  the edge of, or even mixed in with more standard administratum buildings or ecclesiastic buildings. 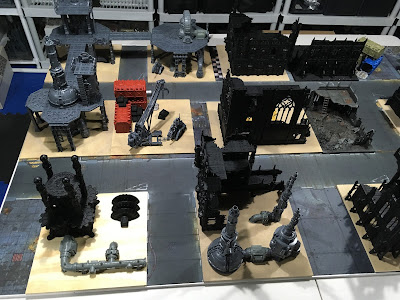 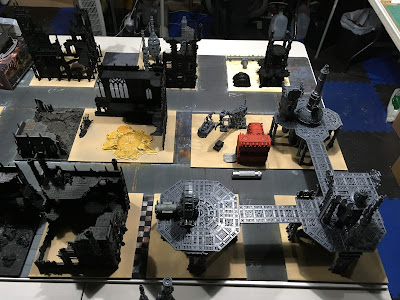 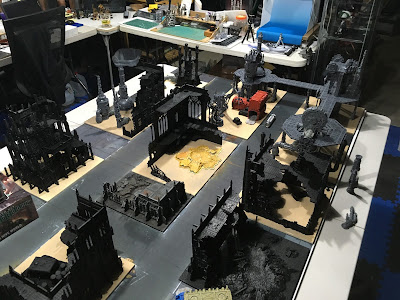 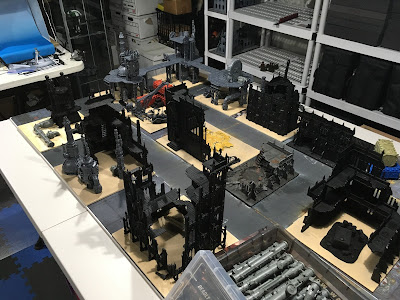 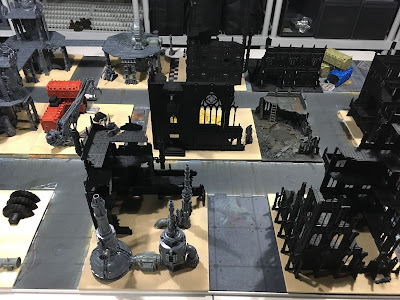 A bit of a hodge-podge at this point, but starting to come together!  With everything based and primed black, things will look for uniform.  The bare areas will be treated to an appropriate amount of ruble and debris, while still leaving them open for model placement. I am hoping for some fun Shadow War games using a portion of the terrain set up more densely in a 4'x4' area on the table.

Then, of course, there will be some epic painting to get this looking more suitable for games.  The standard I wish to reach for all the tiles can be seen in the photo above with the small piece in the upper right.  I will be relying heavily on the airbrush and various layers of dry brushing!

I hope you have enjoyed this WIP preview of my progress.  This table of terrain has been a vision that has taken me years to realize.  I am so thankful that GW has produced the kits they have, which so coincidentally matched what I wanted to do!  The advent of the new 40K rules has been the perfect opportunity to step back from other 40K projects and continue to ready a stunning table for any games I manage to get in with the new rules.

Stay tuned for more progress as I finalize the tiles and get everything primed up for some paint! I like what I'm seeing form the early releases of upcoming rules, and the Shadow War rules look very fun as well.

On the Workbench [May] - Shadow Wars: Armageddon Terrain

From the lack of recent posts, a reader could be forgiven for assuming that nothing has been happening on the project front of late. However, nothing could be further from the truth! I am in full-on Shadow War Armageddon terrain mode.  Aside form the terrain from the boxed set, I have purchased one of each of the additional released terrain sets as well.  Cleaning and assembling the various parts has taken some time and didn't seem very interesting to my readers, so I have been a bit silent of late.

Today, I share a couple pictures of what is most recently on my work bench.  The Shadow War terrain has not yet been assembled into final buildings.  I am cleaning parts and assembling the tanks, pipes and other multi-part bits to see what I have to work with.  Once this is done, I'll make the final decisions on how to assemble and position things for play.  I don't play near enough games to worry about getting bored with stuff.  So I will likely decide on several pleasing arrangements and then just glue everything up. My city fight terrain is on 1ft square 1/4" birch plywood boards for stability and I have made up several new boards in preparation for building up some sector mechanicus pieces using the Shadow War terrain. This should give me one terrain set suitable for both 40K and Shadow War.

I like the plywood bases because the don't warp at the 1ft square size, and allow me to add craters, debris and other various bits to enhance the atmosphere of the pieces.  I do have to be careful to all for the positioning of models so everything isn't all wobbly...that's a challenge for me because it is easy to get carried away adding on suitable fallout for a destroyed building!   I prepare a bare wood base by applying a heavy spry coat of a textured paint...anything suitable from a local hardware/home supply store works.  The texture is a good start to rubble, and hides any plywood grain.  I use the more expensive birch plywood to reduce grain further.  I used to use MDF boards, but found they could still warp over time at 1/4", and were easier to chip at the corners with use and abuse.  But I digress...

By moving the plywood sections around, I can still vary the battlefield from game to game enough for my purposes.  I will build the sector mechanicus terrain so that I get good multi-level sections that can interact when placed close together.  But that is a post for another time as well.

On the work bench this month then are promethium relay pipes, Haemotrope Reactor (sorry no pictures!) and the new Servohauler kit.  I picked up a couple extra relay pipe kits and the generators on eBay because it all interfaces well with the new sector mechanicus kits and will help me bulk out the terrain pieces as well as adding bits to my other buildings to tie everything together. Four kits have been clipped, cleaned and assembled and wait patiently in a storage box:

As mentioned, I also cleaned and built the Haemotrope Reactor kit and that is standing by as well to add flavor and atmosphere to the sector mechanicus pieces I plan to put together.  Not sure exactly where or how they fit in yet...and I forgot to get pictures for this post!

On to the servohauler kit which is fantastic from a model perspective.  The crane is large and very cool, and who doesn't need a couple servitor engines lying about to add flavor to a battle? I know these server very little purpose, and I'm not at all interested in their rules.  They are just cool! I expect to have these matched with the Munitorum containers to add a terrain piece with fun industrial flavor. 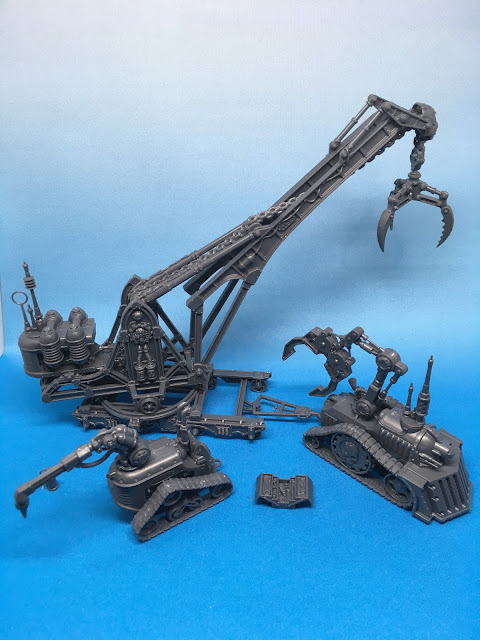 I built them stock and they are very cool.  I missed an easy opportunity for magnets when I glued the tractor bodies together without including large flat magnets beneath the holes on top that take the various claws, tools, and antennae. But in the end this will mostly go unnoticed since as terrain pieces I need them fixed and durable, not loose with parts getting knocked off during play. I doubt I'll miss the lack of pose-ability down the road.

So that's where I'm at.  I have two more sector mechanicus terrain kits to open, clean and partially assemble before I dive in to build up the final terrain pieces.  I should now have enough parts to build some interesting multi-level structures to bulk out the city fight terrain and enable an interesting and challenging board for Shadow War: Armageddon. For 40K, everything should play out to provide a very thematic board for my games. I will enjoy the mechanicus vibe that adds variety to my standard "hab-block" boards where everything has looked like a bombed out office building or apartment.

So until next time,

Cheers and Happy Gaming!
Posted by DAM at 10:01 AM No comments: