Another session and now the pod is fully assembled and glued permanently.  A great milestone! After some Google images searches I decided on how I wanted the console to look.  First up was some freehand work to draw in a tactical screen on the console's center dome.  I saw an example with blue form the internet and thought that was a nice change form the typical green screens I have seen (and done elsewhere). So I based the screen black, drew in the screen with a Vallejo light blue of some color, I forget. I then washed the whole screen with GW Drakenhof Nightshade.  After that dried, a layer of gloss coat completed the effect. 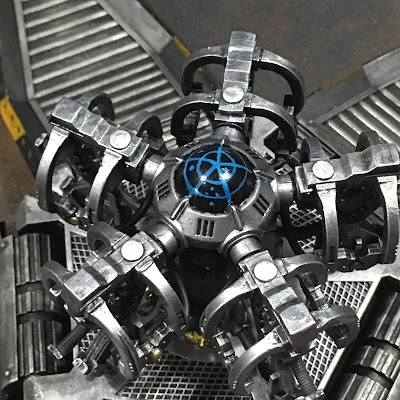 Some small screens were then painted in around the console where the crew might get individual views on various tactical plots and order updates, etc.  These were painted identically to the main dome screen. Some red buttons where added in to break up the endless metal dry brushing. In addition some brass/gold elements were painted in.  Vallejo Chrome was used to highlight the metal areas.  The pod assembled, I may go back and add some additional highlights at some as needed. 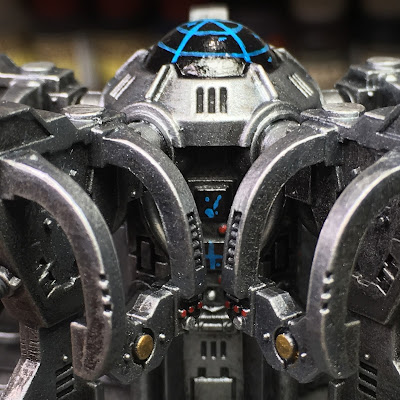 Here is a shot of the base with the console glued down. 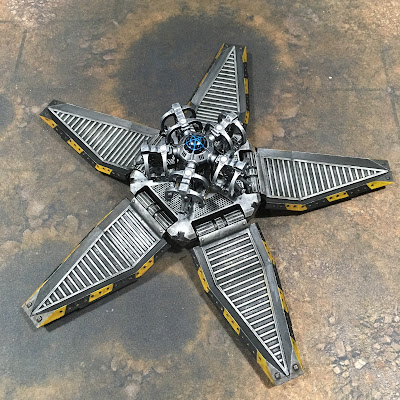 And a close up of the engine which had been competed during a previous session. Here, just enough detail and highlights were added to give the pod interest when the doors are down.  I am pleased with the how the metal areas came out.  The photo is a little out of focus unfortunately. I didn't notice until writing up this post. It's all glued in now, so no goign back to this sort of shot. 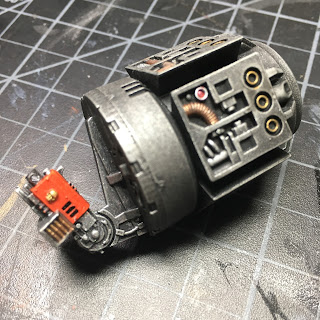 Here is the assembled pod.  No longer will it be pulled apart.  Everything is glued in. I was disappointed to learn that some small amount of super glue apparently ran into the gun mount and froze it in place....thankfully it is oriented shooting out an open door and not into one of the fins. Annoying after the effort to assemble it and carefully paint it keep from freezing it in a fixed position in the first place. 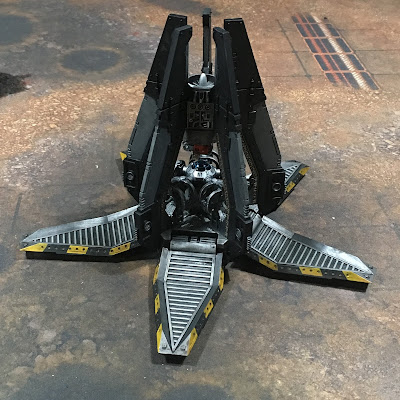 I love how this is coming together...a larger and more in-depth project than I expected at the outset.  With all the detail in this kit it is worth the effort though and I'm really psyched to see it coming together.   Time to wrap up any highlighting of the insides and close it up so I can complete the outside!!

I decided to join the Dreadtober 2016 effort this year after watching all the fun projects that come out of the Dreadtober 2015 event last year. This year, by coincidence, I have a Deathwatch Dreadnought to paint and this will be the perfect incentive to get it done and advance my Deathwatch project. Stayed tuned for some Dreadtober posts as the month of October advances!


Posted by DAM at 9:25 AM No comments: Links to this post

Today I wanted to share some progress with my Deathwatch project.  I very much like to the new release sculpts for the Deathwatch Space Marines. Things are coming together.  First a crowd shot of where I'm at with the build... 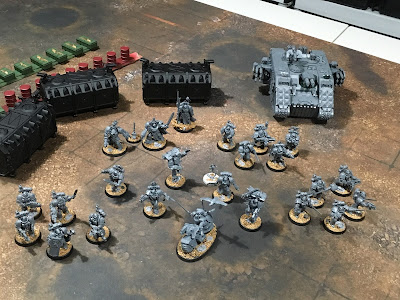 Above the various assembled models have been divided into 5-man veteran squads with characters and individuals towards the center.  Using the Deathwatch upgrade bits among other things I was able to make use of a partially assembled land raider I have received as part of a bits lot from the Spiky Bitz/The Long War Kickstarter. I like the Redeemer variant, but I already have an Inquisitorial Land Raider Redeemer which can be seconded to the Deathwatch at any time, so I went with the cavernous and very shooty Crusader variant to aid in the delivery of the Emperor's wrath to the very heart of the Xenos.

Shown above, models can be pulled from the whole force to assemble Kill Team Cassius if need be. The individual formations introduced by the various box sets are interesting, but I fancied building my own force of Deathwatch Space Marines unconstrained. Missing from these pictures are 5 additional Vanguard Veterans, a dreadnought, a drop pod, and a Space Wolf terminator with thunder hammer and storm shield.  More terminators are planned to give additional options when building kill teams.  I am considering adding another Veteran squad as well just to bulk things out a bit more. All but the 5 Vanguard Veterans and new terminator have been based black in preparation for painting.

I will close this post with some WIP shots of the drop pod which is currently on my painting table. I left the pod in sub assemblies - the base with doors, the center console and harnesses, the five fins, and the engine/weapon mount.  They friction fit very well after being based black and the whole pod can be assembled or disassembled at will currently. 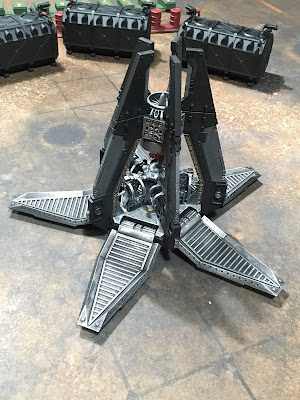 This is what it looked like last night when I sat down to make progress.  The bare metal has been done, largely through dry brushing with increasingly light Vallejo silver colors (gun metal, oily steel, aluminum). I am using brass for the explosive door bolts and a few other details.  The engine mount is largely painted, though doesn't show well here.  The Stormbolter's gun cowling is based red. Last night I came to the mad conclusion that I needed the ubiquitous hazard stripes on the doors... 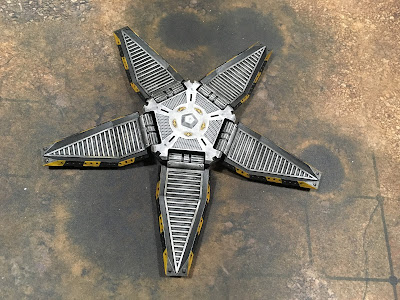 I chose a sparse pattern and used a pencil to draw the stripes in freehand.  I made use of the various bolt holes to help mark out the symetry of the stripes so they look more consistent across each separate door. This probably should have been done with the air brush and masking, but as I said this was a MAD inspiration, so of course I brushed it all in.  Above is the result after close to four hours of my noob brush work.

I started with harvest brown (I think that;s right) from the master series paint line and painted over the black along all the edges where the stripes would go.  I then drew in the stripes and use Vallejo medium yellow to fill in the yellow portions.  I say fill in...really I layered yellow over the brown in seemingly endless coats...maybe fourteen or fifteen...seriously...many coats...until I got the yellow to a point where I was satisfied.  I favor a darker, dirty style, for my 40K work so I didn't bring the yellow up to bright Imperial Fists standards. :) This done, and my eyes bleeding, I filled in the black which went predictably quicker.

I tidied up the inside of the door edges between stripes and flood panels using a Vallejo black metal which comes out like a very dark gun metal. I then painted Vallejo brass into each and every bolt hole in the hazard stripes...there are many. This done, the stripes were washed using Agrax Earthshade and the black-metal inside edges were washed with Nuln Oil. Lastly, I poked a bead of Nuln Oil into each and every bolt hole along the stripes so the brass holes appear just a bit sooty from being blown open. :)

So moving along...will exterior AND interior detail, a drop pod is a fairly involved project if you want to do more than a simple three color standard for the table top.  There is still highlighting and weathering to do on the inside of the doors, and I haven 't started on the outside of them.  The console will get some love too.  I plan to freehand some sort of tactical plot onto the center dome screen as well as catching any other significant details with color to add interest and prevent the middle of the pod from remaining a riot of plain silver dry brushing. The fines are all base coated with a simple Nuln Oil wash. They will require highlighting and weathering.

The guts complete, I'll glue the thing together for a final assembly and then close up the doors to get started on the outside...

Thats the Deathwatch so far.

Happy Gaming!
Posted by DAM at 9:33 AM No comments: Links to this post