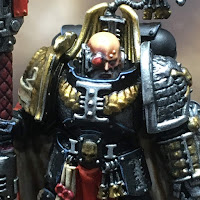 And the scope and variety of my projects grew. This blog continues to chronicle my work on various hobby projects set in the Warhammer 40,000 game world. However, everything I find interesting in the domain of the Imperium is fair game now.  There may still be Death Korps projects from time to time, but the reader may also find work on the Adeptus Custodes, Dark Angels, Deathwatch, Grey Knights, Imperial Assassins, Imperial Knights, Inquisition, Red Hunters, etc..  And when that is not enough, there will be terrain projects as well as small scale work on the models for related games like Shadow Wars: Armageddon.

I became interested in tabletop war games in the early nineties, cutting my teeth on Battletech, Warhammer Fantasy, and finally Warhammer 40,000. Before this, I painted metal Dungeon & Dragons miniatures for table top role play.  And throughout this period well into the 2000's I was also an avid Live Action Role Player (LARPer).

After playing Warhammer Fantasy, I was first drawn to the skirmish nature of the second edition Warhammer 40,000 game.  There were far less models to collect and drive about on the table top.  I built a decent force of Orks until I grew jaded on the random nature of their performance in those early editions; all the time experiencing the Space Marines routinely and reliably trouncing all in their path.  It was this envy then that led me to follow the veiled path of the Dark Angels, who have remained my primary marine force these last 20 years and more.

Along the way, I picked up and put down Tyranids and Tau. Embarked on a mission to build a massive army of Imperial Guard based entirely on the Death Korp of Krieg (funded primarily by selling off my large collection of Battletech miniatures and books). I grew a force of Grey Knights and more recently Deathwatch.  I found a fondness for the inquisition in the process as well and would like to add a small force of Red Hunters space marines to my collection. Then of course there is the mechanicum...and small army awaits there too, all in boxes...for my time.

With the release of the Horus Heresy kits, I was finally able to put the 1st Legion (Dark Angels) on the table.  And while I have not yet done so, I have collected a good deal of models for the purpose! Last would be the addition of a few of the Emperors personal guard (Adeptus Custodes) and the Silent Sisterhood.  All of these and likely more will show up here on the blog from time to time.

In recent years I have also begun reading a great deal from the Black Library.  This has led me to become more thoroughly immersed in the game system and rich tapestry of Warhammer 40,000.  The Horus Heresey series in specific has really been a lot of fun to go through.

In all this time, I have been married, divorced, married again. And most recently I have been blessed with two lovely, healthy daughters and have managed a modest career in software engineering.  While I have less time for the hobby these days, the hours modelling, painting, and even day dreaming over future projects have really helped offset what might otherwise be a fairly stressful day-to-day family life.

At close on 50 years, it may remain odd to continue my days playing with plastic and metal soldiers. But I wouldn't have it any other way.