I was able to make some progress on the the AT Warhounds for Legio Tempestus this week. 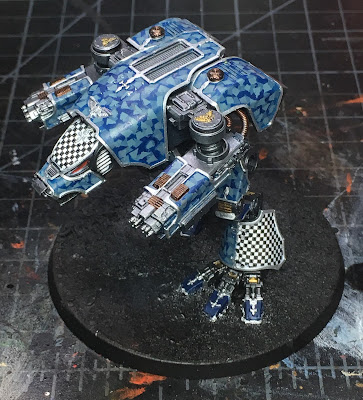 Facta Belli got its hoses and some bolter details painted with GW tinbits.  The color scheme is really coming together on these Warhounds.  I love the mix of black/white/checker heraldry. 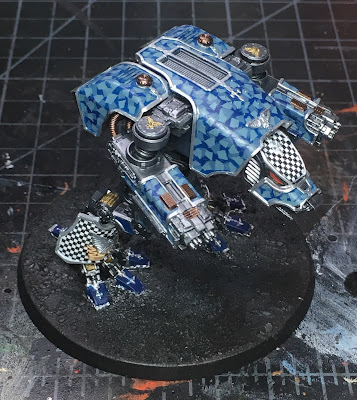 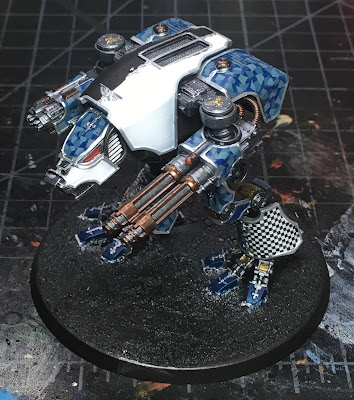 Dente Ferrum had the same treatment with tinbits added to the turbo laser destructor arm matching Turbo Canis. The black and white panels were cleaned up as well in preparation for shading. 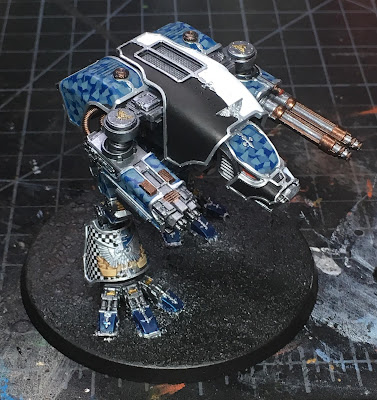 Last up was Lux Curet who got tinbits on its plasma blastgun as well, also matching Turbo Canis who set the precedent for how these arm weapons would be painted. 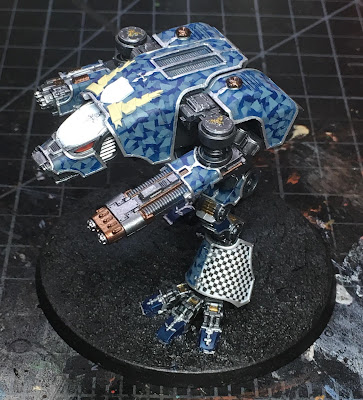 Lux Curet also had some minor touch up to the white panels, including the shield on the carapace.  These shields remain blank for now in hopes that the Legio Tempestus decal sheet previewed on Warhammer Community during Warhammer  Fest UK 2019 will be released soon. 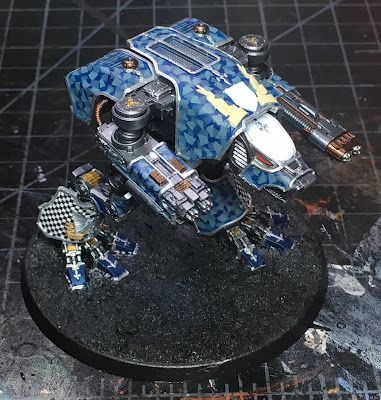 So, all four warhounds are now painted to the same level with regard to their base coats.  Next up, I will correct any issues on the camouflaged plates.  I'll have to move carefully there to be sure I can correct the camo without spoiling the sharp edges of the pattern. Then I can shade everything and move on to highlights.

Thanks for sticking with me this far on this project.  After painting two Reavers and a Warlord it seemed that batch painting four warhounds would be no issue.  Well, it might have been better to paint these two at a time, as it turns out. This is something I'll consider as I look towards painting all the knights for House Taranis at some point. 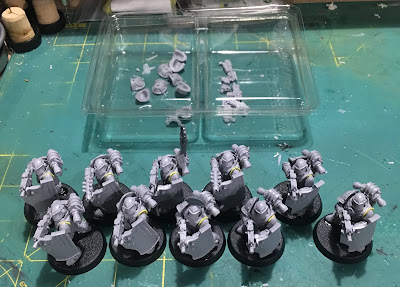 In today's post, I am showing the completed Breacher squad from the workbench this month.  Bit-by-bit I replaced the poster-tac with epoxy and got the squad fully assembled.  I started with the weapon arms, first gluing the guns to the hands.  Then glued the completed arms to the bodies.  5-minute epoxy does a great job, but doesn't grip as quickly as fresh super-glue.  So the trick there was to apply some epoxy to the parts, then wait just a bit before assembly.  Timing is critical, esp. with a ten model squad.  wait too long and the epoxy sets on the last pieces before you get a chance to to stick them to the model.  Go to soon and the parts don't adhere and slip and slide off, leaving you to continually fuss around with each part trying to get it to stay in place until everything sets up.  In some cases, I did five models at a time instead of doing the whole ten at once. Mix small batches of epoxy at a time to avoid wasting too much.

After the weapon arms were done, I glued down the heads.  I left the heads to last so I could get good poses with the marines sighting down their weapons, or at least looking in a direction that made sense to the rest of the pose. Once the heads were in place, I attached the shoulder pads, starting with the right shoulders.  The Forge World Dark Angels pads went last on the left shoulders, positioned carefully on the upper arms so I would still be able to attach the arms after painting. As mention in the prior post, I'm using poster-tac for now to adhere the left arms so that they can come off for painting.

While wrapping things up, I realized that these marines carry standard war gear (bolt pistols and grenades) that are not represented in the Forge World kit. This omission is a shame for what are otherwise pretty cool looking models.  So I rummaged around in the vast bits collection to scrounge up ten holstered bolt pistols and an assortment of frag and krak grenades.  The Sergeant carries melta-bombs too, so I grabbed one of those from a Forge World upgrade kit I had.

So there they are.  Ten breacher siege marines to add to my growing 30 Dark Angels army.  This squad completes the build for my 1K zone mortalis force. I'll write more about that in a later post.  If I complete the paintwork, I'll have 2K of painted pre-heresy Dark Angels. I'm going to have to take a break on infantry and dreads soon, though, to get some vehicles into the army.  So far, I have none of the tanks that roam the battlefields of Imperium, save for a lone dakka-dakka Predator (Auto-cannon and heavy bolter sponsons).  I do have some jet bikes waiting in the wings though, but no Sicarans or Land Raiders, etc..

There are just so many cool kits to acquire and build for Horus Heresy games!

What are you building?

Cheers and Happy Gaming!
Posted by DAM at 8:49 AM 3 comments:

This month, I took a little time out on the workbench to build a Terran Breacher squad for my 30k Dark Angels.  I'm starting with a minimum strength squad of ten models, but I hope to add at least five more to the squad at some point (right, along with the extra models to top off the previous two tactical squads... - ed.). 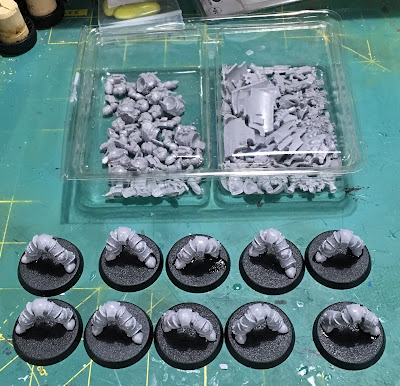 I started simple by gluing the feet to bases.  I knew I was going to need a stable base to build up the poses. I've given up on super glue for resin and now work exclusively with 5-minute two-part epoxy.  Sure, you have to time things a bit differently and you don't get the same instant grip super-glue (sometimes) offers.  However, I get strong, sticky, flexible bonds without all the brittleness associated with super glue. 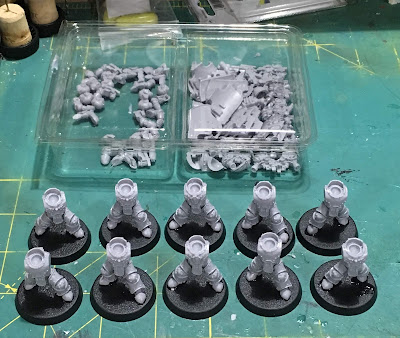 With the legs dried, I positioned the torsos next. Once dry, it would be nothing to use some poster-tac to position the arms while test fitting the poses for all ten models. In preparation for posing, I glued the shields to the the arms.  Now, many would leave the shields off for painting.  I decided a better approach in this case would be to leave the whole arms off.  The guns sit integrally with the shields on these models, so I felt I would have an easier time getting my poses down if the shield arms were fixed. The weapons are fiddly enough on the right arms without the shields falling off the left arms as well. I had to get the arm position correct in any case, so temporarily fixing the arms to the body, with the shields glued on seemed a good course of action. 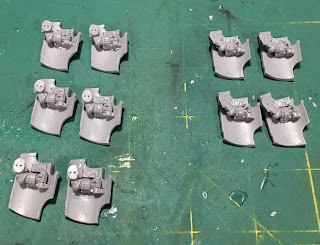 Most of the parts are identical, however, there are four "left-leg-forward" leg sets, and a seemingly corresponding four identical posed left and right arms.   I took this as a clear sign that these parts all went together.  You can see the four shield arms above that are bent differently from the other six, for example. 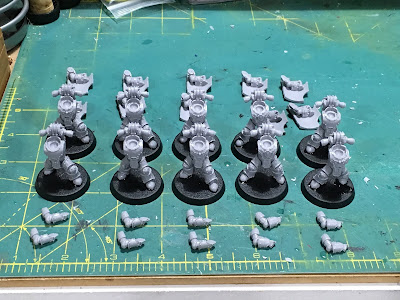 Here, all the parts are laid out in preparation for the final test posing of each model. The backpacks have been glued on after some test fitting proved that they wouldn't be in the way for the rest of the process. Next up, poster-tac is used to position each part. It turns out that the pieces fit quite well and posing is pretty easy, if a bit static.  I could have varied the angles of various arms to get more uniqueness in the posing, but I wanted this squad to rank up and show off the sort of shield wall discipline the space marines (and First Legion, certainly) are known for.

So, after a little fussing around with the poster-tac, we now have ten Breacher marines ready for glue. Using the putty in this manner allowed me to test fit everything and verify how the poses would look prior to committing to glue. I wanted to be sure I had the correct arms and weapons together so that the shield wall poses would work.  I chose the Graviton special weapons for the squad. No idea how they will perform in a game, but they made sense for a Zone Mortalis-based ship combat game where ranges would be limited and heavy armored troops and dreads a likely possibility.  I also wanted to work in some exotic weaponry for the First Legion, not just the same old 40K special weapons on everyone (i.e. plasma, flamers, melta). 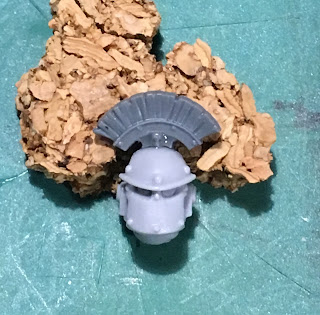 Last up was converting some bits for the Sergeant and Vexilla.  I pinned the plastic helmet crest from a Mark III tactical squad frame to one of the breacher helmets.  This caries on my existing theme for Sergeants in the tactical squads. I want the breachers to hold their ground, so a Vexilla seemed a good choice. The plastic bit form the same Mark III frame was easily pinned to one of the resin backpacks. I started working with the same resin bit from the Mark IV command upgrade pack, but snapped it almost instantly trying to drill out the base for a pin - brittle resin.  If you have the plastic bit, you can't go wrong here. Pinning is necessary as this tall flag is going to get hit a lot and will be easy to snap off if attached with glue alone. 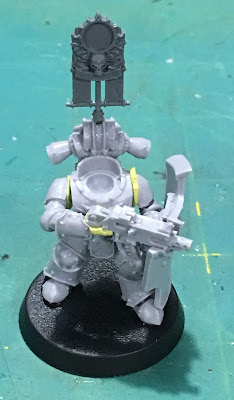 And that's where the squad stands so far.  Next up, the models will be glued together by systematically removing poster-tac and replacing it with epoxy as I work across the squad.  The shield arms will NOT be glued on at this point.  I'll keep the poster-tac to insure the correct posing. The arms will be removed for painting, then ultimately glued back on carefully to avoid spoiling the paintwork. So far, epoxy has proven grippy enough that I don't feel pinning is necessary for the arms and weapons.  For the perfectionist, pinning would totally be the way to go here to insure rock solid models.  If using super glue, definitely pin everything! :)

At some point I'll follow up with a pic of the fully assembled squad. I hope the discussion around my process for assembling the squad will prove useful so someone out there. As modelers, we have our own styles, tricks and techniques for basically the same thing in many cases.  However, I often find myself refining my work after reading about something new I hadn't considered on my own.  So I hope to offer a similar service here.

For now, that's what's on my workbench.

Cheers and Happy Gaming!
Posted by DAM at 12:07 PM No comments:

While slow to get back in the swing of things with the hobby, I am indeed back in the saddle after returning from a family vacation. Just before departing for vacation, I was able to complete the trim on Facta Belli.  Some touch-ups are inevitable, but I'm going to manage all of it across the four titans at once rather than fuss with each model independently. 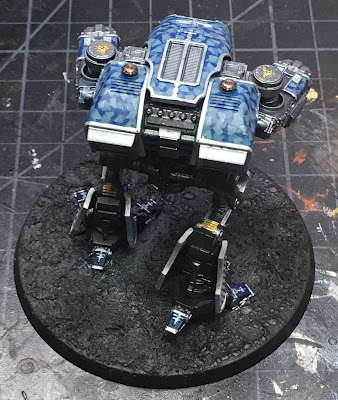 Back from vacation, I completed the trim on another Warhound, Dente Ferrum. 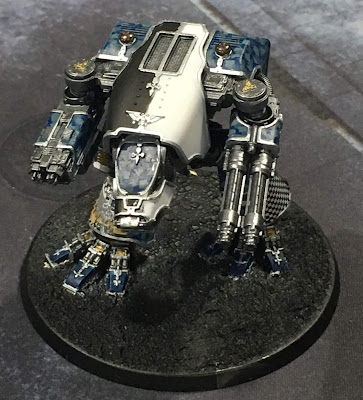 Inching ever closer to the finish line.  I have some more time to paint this week and I hope to complete the trim on the final Warhound, Lux Curet. 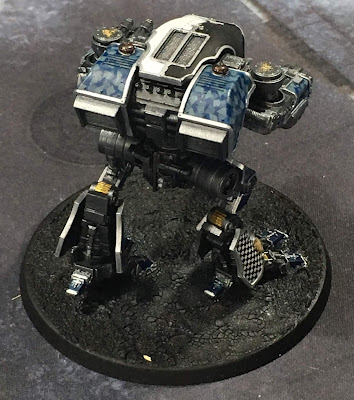 With the trim complete, I'll be on with the final details (weapons, heats, etc.)  Once I have the base colors on everything, I'll touch it all up once and then shade all four titans together. Then its highlights and base work.  Seems like a lot, but these four titans are getting close to complete.  At that point I'll take a break form titans to work on either a 30k or 40k project.  Though with the new Acastus Knights box around the corner, its going to be tough not to roll on into knights for Titanicus.

So much good work ahead!