On the Workbench [MAY] 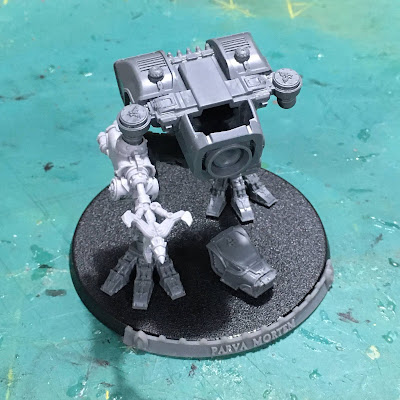 Greetings, and welcome to another post from the Workbench.  This month, I've been working on a couple new Warhound titans for my Legio Ignatum collection.  This time around, I wanted to try out the new close combat weapons offered by Forge World.  It is not clear to me that these will be weapons I use often in my games. So I decided it was a good time to bring in magnets to allow me to swap around weapons on these new Warhounds.  Normally, I have found Warhounds inexpensive enough that it didn't seem worth magnetizing the weapons. 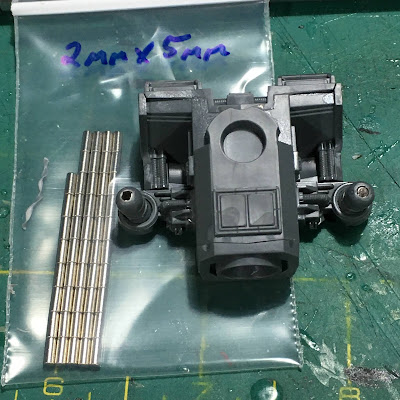 To increase pull in such a small area, I decided to try out 2mm x 5mm rare-earth rod magnets.  As shown above, I used a pin vise to drill holes in the Warhound arms deep enough to receive the rods. Here there is some care to be taken to make sure the weapons hang in a pleasing manner once completed.  An early attempt had a terrible angle and I had to use green stuff to fill the original hole, before drilling again at a slightly different angle. A little super glue insures they won't come out, but honestly they fit tight enough on their own. 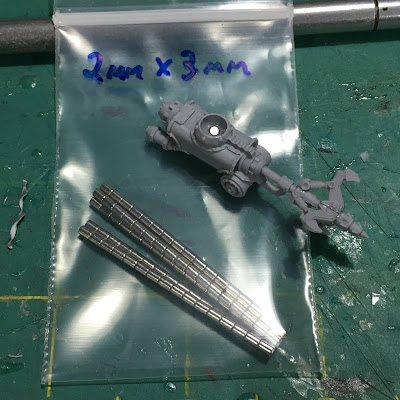 With less depth to play with in the weapons themselves, I chose 2mm x 3mmm rod magnets to go into the weapons themselves.  A pin vise was again used to drill the holes to a depth that would receive the magnets and allow everything to sit flush when attached to the arms of the model. Here again, you have some flexibility with where you seat the magnets, depending on how you expect the weapons to hang once attached. 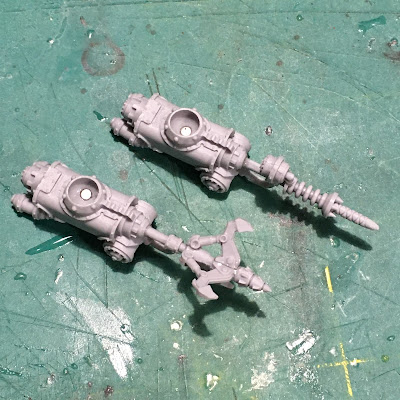 Above, the two Forge World weapon options are shown assembled, magnetized and ready for painting.  The Ursa Claw looks especially wicked, doesn't it?  I'll take this method forward now and magnetize the other standard Warhound weapon options to match.  This approach will provide a full suite of weapons to use in games of Adeptus Titanicus.

It was a simple project and a fun way to try out these new weapons without locking me into keeping them if they work out for gaming. 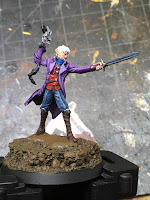 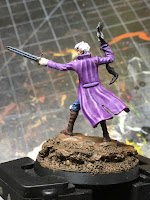 Soon, I'll move on to  Blackstone Fortress Heroes.  I took a break to paint this AD&D figure for a 5th edition virtual campaign.  I've been playing in the campaign virtually using a combination of Zoom and Roll20 since the Covid times. This is Meryn Yes'gell'a, a Moon Elf Sorcerer. He's still a work in progress, but I hope to complete the model this week so I can get back to my usual projects. I've been sitting on the model for too long, and needed to complete him before the campaign wraps up and the project becomes moot.

Best wishes for your own projects.  Stay safe out there.