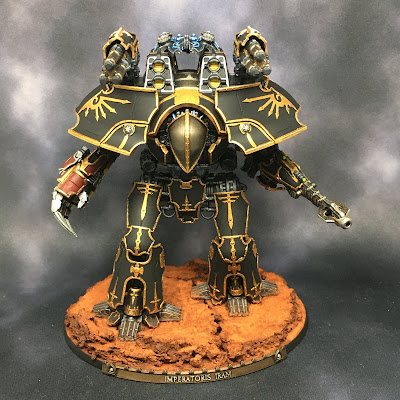 Greetings, and welcome to another post on custom name plates. These fantastic mini-titans for Adeptus Titanicus cry out to be named and what better way to display those names, than with some shiny plaques on the bases! To that end, I reached out once again to Versatile Terrain with a list of my Titan's names to be cast into custom name plates. 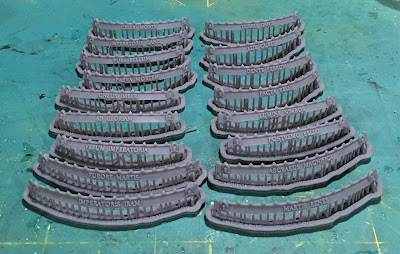 I got them back pretty quick, which is a credit to the team at Versatile Terrain.  Seems they are taking a break currently, so I got in just under the wire.  The quality of the names plates is great and they fit the various base sizes they were targeted at quite well.  I chose a gothic look to match the Warhammer 30K/40K universe. 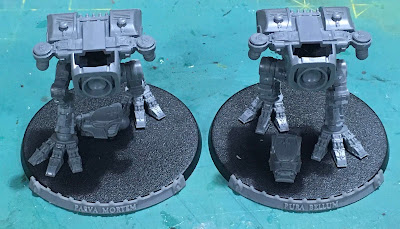 Here is what the plates look like glued to Warhound Titan bases.  These are the next two Warhounds in the Manufactorum for Legio Ignatum.  Since I hadn't begun painting these, I glued the plates on directly.  The rest were painted prior to being attached so I wouldn't mess up my painted Mars terrain bases. 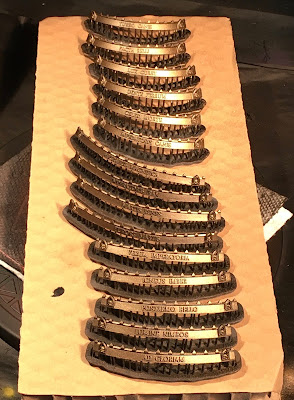 I started by priming the plates with Vallejo Surface Primer Black, then layered on a coat of Pro-Acryl Bronze with an airbrush.  I did not remove the plates from the sprue at this point; this gave me something to hold on to while painting. 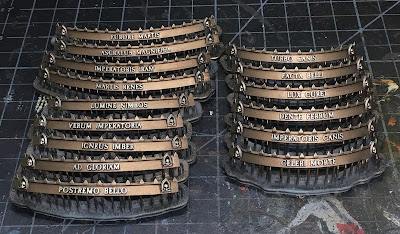 Back at the painting desk, I shaded the plates with GW Agrax Earthshade.  Once that had thoroughly dried, I came back in and highlighted the text and sharp edges of the plates with Pro-Acryl Light Bronze.  I felt the bronze look lent some age and weight to the titans.  The light bronze really helps the text pop a bit, making it easier to read at a glance.  The plates were given a coat of varnish and left to dry over night before being removed from their sprue and attached to the various titans in my Adeptus Titanicus collection. 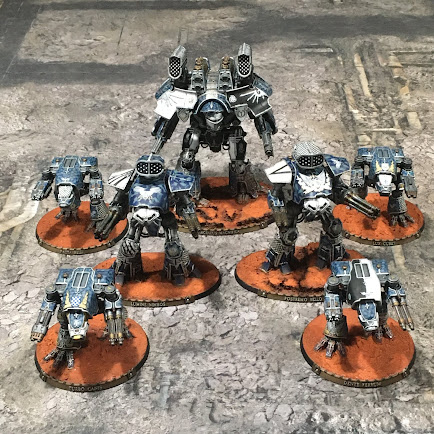 The Legio Tempestus Axiom Maniple is shown above sporting their new name plates. Click through to the original images if you want to get a better close up.  The plates stand out without drawing too much attention from the titans themselves. 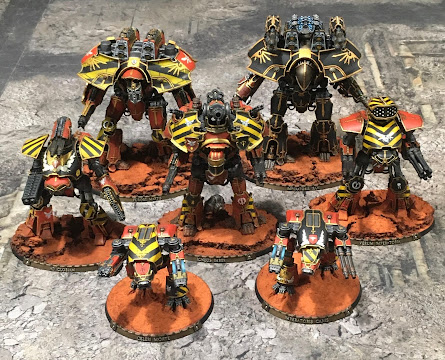 Last up is a family shot with the Loyalists of Legio Ignatum and the Ordo Sinister.  This final touch to the titans really polishes the project and should add some fun narrative to my games. Also, there is less chance of confusing which titans go with which terminals and players can more easily refer to them during games, especially with the more plentiful Warhounds.  And finally, I could never recall the correct names for all of the titans anyway, so that is now no longer an issue. 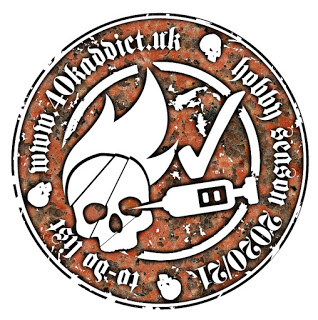 So I'll indulge in a stamp of DONE for that little side project.  That is for 14 truly completed titans now.

Not sure what to pick up next.  I have a bunch of terrain for Adeptus Titanicus calling out for attention; however I owe some time to other projects too and I've sunk a bunch into AT so far this year.  Maybe some characters for Blackstone Fortress?  That's overdue...or perhaps I'll return to the Dark Angels.  I have a primarch waiting for assembly and a host of other units for both 30K and 40K...

Check back later to see where the hobby butterfly takes me.