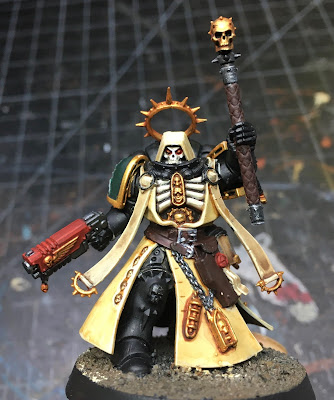 So, I'm banging away at a Primaris Chaplain for my Indomitus Dark Angels force.  As I've posted previously, I decided to assign the original Indomitus Chaplain to the Blades of Vengeance project in favor of pulling this guy in for the Dark Angels.  The soon to be released codex may not allow for Primaris Interrogator-Chaplains, but that's how I saw this guy as I started the project. This of course widely departs from the original notion for how distrusted the Primaris were by the Dark Angels.  However, as GW modifies the fluff to allow Primaris marines to join the inner circle, I'm jumping all in with this all Primaris force, started with the Indomitus boxed set. 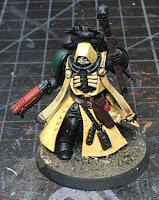 The base colors went on much like the Judiciar.  I like the contrast of the bone-colored robes with the black armor.  I put Dark Angels green on the shoulder pads to tie him into the force. 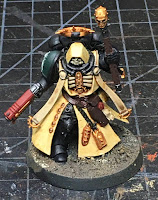 Lots of gold and some dark silver (eg. boltgun metal) comes in to add some bling.  A standard Dark Angels chapter symbol transfer was laid down on the left shoulder while a light grey is painted over the right shoulder pad iconography, shaded with GW Nuln Oil. All of the colors are up above on the recipe tab.  I'm transitioning to Pro Acryl paint by Monument Hobbies.  I tried a couple on a lark, and have found that they just really fit my painting style and methods. 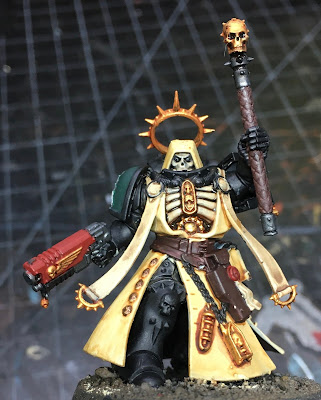 Here's how the models stood before I began attacking the highlights and cleaning up some of he heavy handed shading.  I'm on pace to complete this guy before the end of the month.  With that done, I'll have completed my goal of painting the Marine half of the Indomitus set; albeit one month over due and with a replacement Chaplain.  The more significant goal, will be the first completed Dark Angels force in my collection after decades of playing and collecting them.

My previous record was one HQ and two tactical squads completed before I started the blog.  I never completed a Deathwing or Ravenwing model.  With this effort complete I have units from the various divisions of the Dark Angels represented and it feels great! But I live in a mind of small victories. 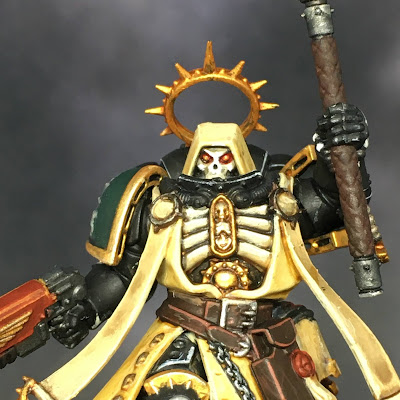