Greetings.  The Assault Intercessors have moved on a piece.  I added the decals after deciding this would be the second assault squad in the company. I need to paint on the company markings, but that waits for future sessions.

The decals were sealed down with GW Lahmian Medium after a night of drying thoroughly. Next, the leather, weapons and eye lenses were highlighted as shown in the opening picture above. Here are a couple close up shots of the example model I've been using... 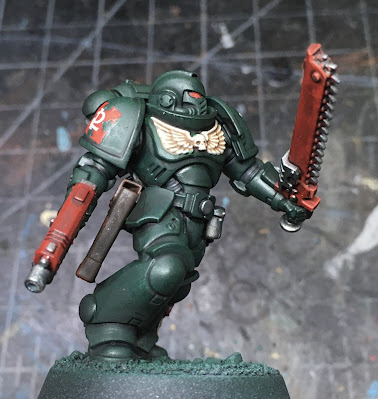 I am happy with the results so far.  Things will look better when I get the armor highlighted. 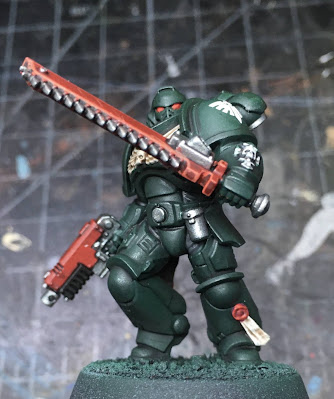 I'm thinking a little lighter orange/yellow may be needed as a second highlight for the eye lenses. 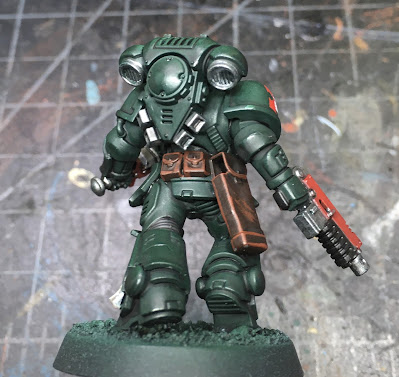 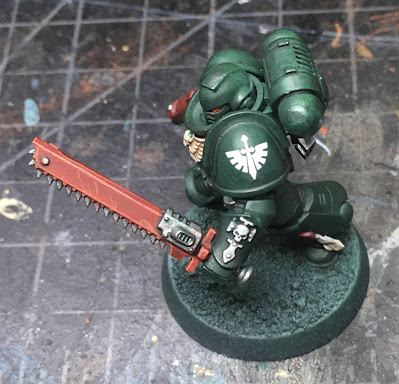 I'm liking the chapter decals here.  I was initially bummed that I wouldn't be using the chapter pads with the raised icon on these push-fit models due to the pads being molded on and not a separate part. But it all looks cool enough. In the balance, there will be enough mix over the whole force that it likely won't matter which models have raised icons, and which are transfers.
Next phase will be painting the 5th company symbol on all the left knees, then highlighting the armor, including the chest eagles. The metal needs highlights too.  Then I'll complete the bases and likely be done with the project.  I'm considering using gloss varnish on the eye lenses this time after I complete the overall varnishing of the finished models. Might be nice to have a little shine there.

So, probably a couple more sessions before these lads are done.  Hopefully I have some good progress to show by the end of the week, with final pics up next week if things go well.  I'd like to move quickly on to the three Eradicators to see if I could complete them before the end of the month.  DreadTober looms large on the horizon! That'll mean setting 40K aside so I can complete the Forge World 30K DA Leviathan dreadnought.

Oh, and I acquired The Lion so that has to get squeezed in somewhere... 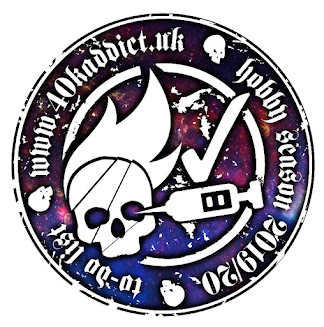