GAME: Beyond the Burning of Prospero - a Horus Heresy Campaign 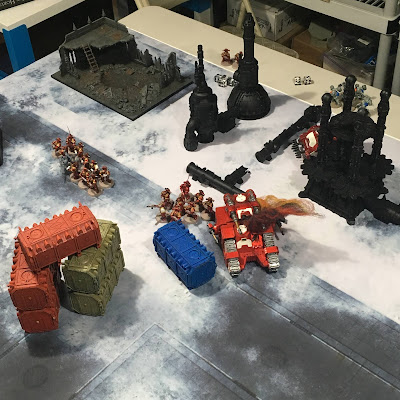 Greetings and welcome to a new addition to the blog - sporadic gaming posts! I'm not going to run full battle reports, may others do that, and better than I will.  However, it enriches the hobby to see the hard hobby hours used in glory on the field of battle.  So here we are, this time in the setting of the Horus Heresy.

Prospero Burns, and Magnus has sent his fleets into the aether to spare them from the wolves of Leman Russ, dispatched to bring the wayward Crimson King to heel. One small splinter of which encounters pickets from a First Legion expeditionary force on a nameless death world, just one more among millions in the void. Aware of the Emperor's sanction on the Thousand Sons, The First Legion battle captain directs his ships to move in. Among the remnants of a forgotten Imperial outpost, the battle is joined.

In our campaign, both Legions consider themselves loyal to the Imperium.  The Thousands Sons reel from recent events and are still trying to understand why they have been treated so by the Imprium they believe they still serve.  We started with a hobby goal to paint and deploy 1000  points each for the first game.  A small amount in Horus Heresy games, but more than enough to keep us busy painting through the past Winter.  For the battle, we rolled up Blood Feud with a Search and Destroy deployment map.

I lost the roll to decide who sets up first and my opponent asked me to set up.  Once both forces were set up, I chose to go first as was my right.  My warlord for the battle, Brother Centurion Caphriel, rolled the warlord trait Strategic Genius, as fits a son of the Lion. Yet the Thousand Sons, no doubt through warp-craft, foresaw this and seized the initiative at once. Fortuantely, the Dark Angels were arrayed in cover as seen here in a shot from the end of turn one. 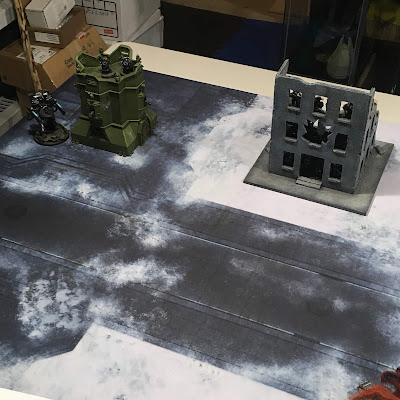 Turn one was a fairly typical game turn for two small forces with no Alpha strike strategy. The Thousand Sons advanced quickly using their Sicaran battle tank to shield advancing Tactical squads, supported by a Whirlwind Scorpius in cover behind the ruins.  The Scorpius claimed three members of squad Gathael who had deployed to the roof of an abandoned bunker to eliminate the incoming Sicaran. 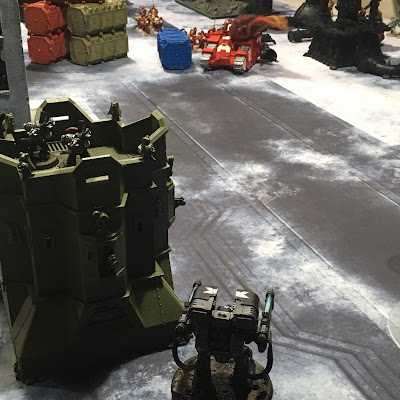 Undaunted, Sergeant Gathael kept his aim true and struck the leading Sicaran a glancing blow with a krak missile. His remaining brother had been last through the top hatch of the bunker and had not yet sighted his launcher in on the tank.  The veteran Brother Validus stomped out from behind the bunker and let loose a furious barrage from his Hellfire Plasma Cannonade.  While not enough to fully destroy the venerable Sicaran, it was silenced all the same by two more glancing hits. First blood would be the honor of his Legion.  Using is Aiolos launcher to track the incoming tactical squads advancing behind the burning Sicaran, a barrage of missiles claimed a son of Magnus while a lucky plasma shot from high a top the neighboring ruins claim a second. 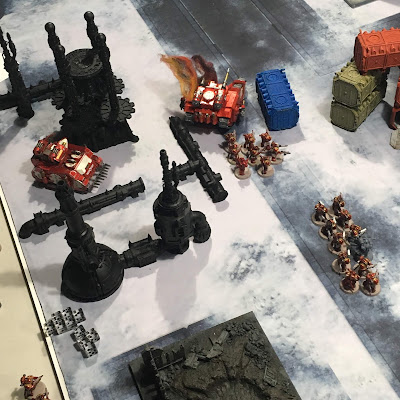 The legions bled on both sides and the battle was joined in earnest.   Having spent most of the evening discussing the campaign to come and generally carrying on, we called it quits at the end of turn one.  The game left "in situ", we'll wrap it up Friday evening, a side benefit of the basement beats lab. 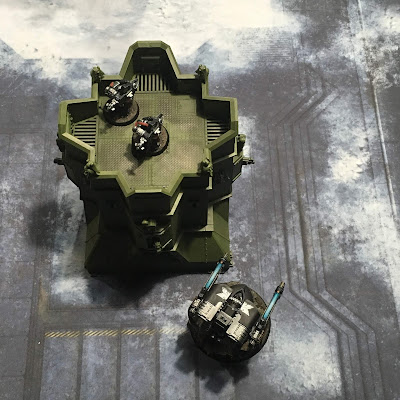 The heroes of turn one wait for judgement in the top of turn two when the Thousand Sons respond to the loss of the Sicaran. Brother Validus will no doubt have to ferret out the Scorpius or watch it claim large numbers of his battle brothers.  Neither the stout walls of the bunker, nor the hardened armor of the Heavy Support Squad was proof against its fury. 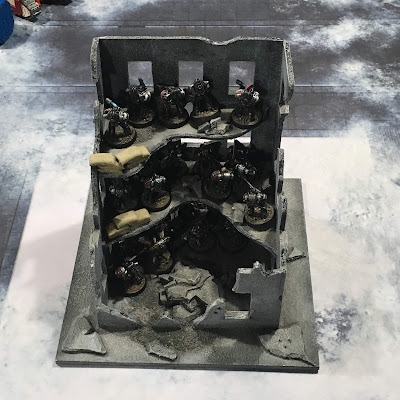 The bulk of the First Legion probing force holes up in a ruin waiting to strike. With a near equal force of Legionaries advancing on their position, will Brother Caphriel lead them forth with the Emperor's vengeance or bide his time and draw the enemy ever closer? Will the Sons even take the bait?

Check back next week to find out.

For now,
Cheers and Happy Gaming!