Update: more progress on the Baneblade! 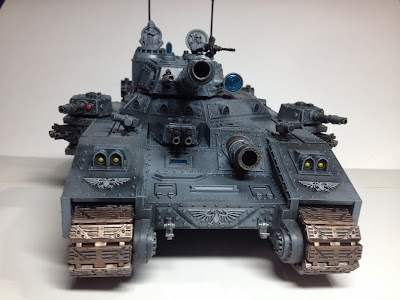 After a few weeks of on-again, off-again progress it's time to share where I'm at with the first super heavy tank assigned to the 262nd from 8th korps, 7th regiment.  I am very pleased with how things are going so far.  Following the overall camouflage that I shared in the previous post, it was time to add some details.  I started with a dry brush of the uniform grey used as the light camouflage stripes.  Then came the guns and engine bits, followed by some basic lens and view port work. Last I highlighted all of the Imperial eagles in Vallejo ash grey and painted the barrels. 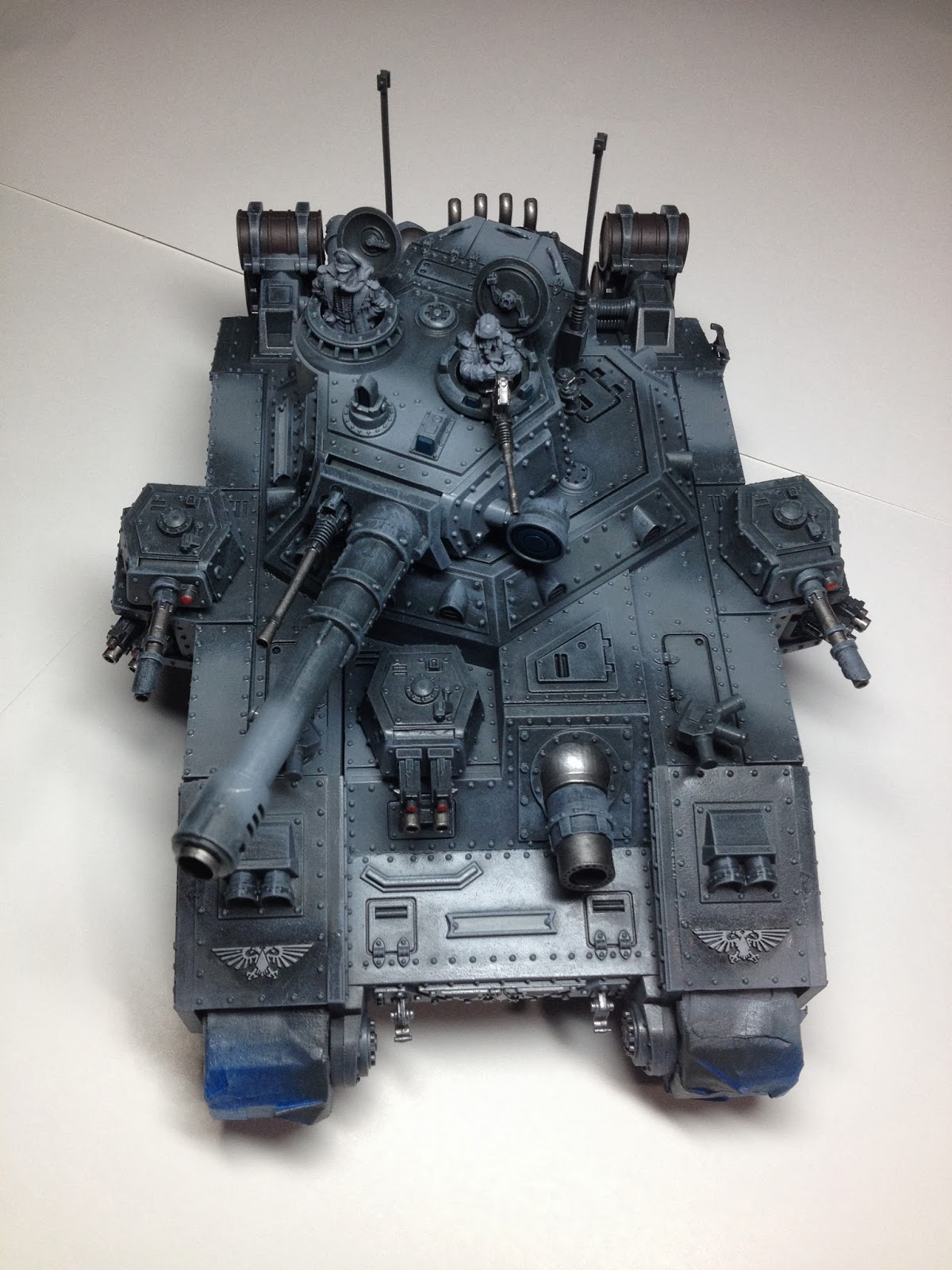 I kept the masking tape on to keep the tracks a "clean" base black without having to go back and retouch after the dry brushing.  This approach simply allowed me to be more free with the dry brushing around the tracks.  The barrels are painted a dull red/rusty color to give a little accent at the rear of the tank to break up the greys.  Also, it seemed incorrect to have the attached barrels match the base color of the tank. 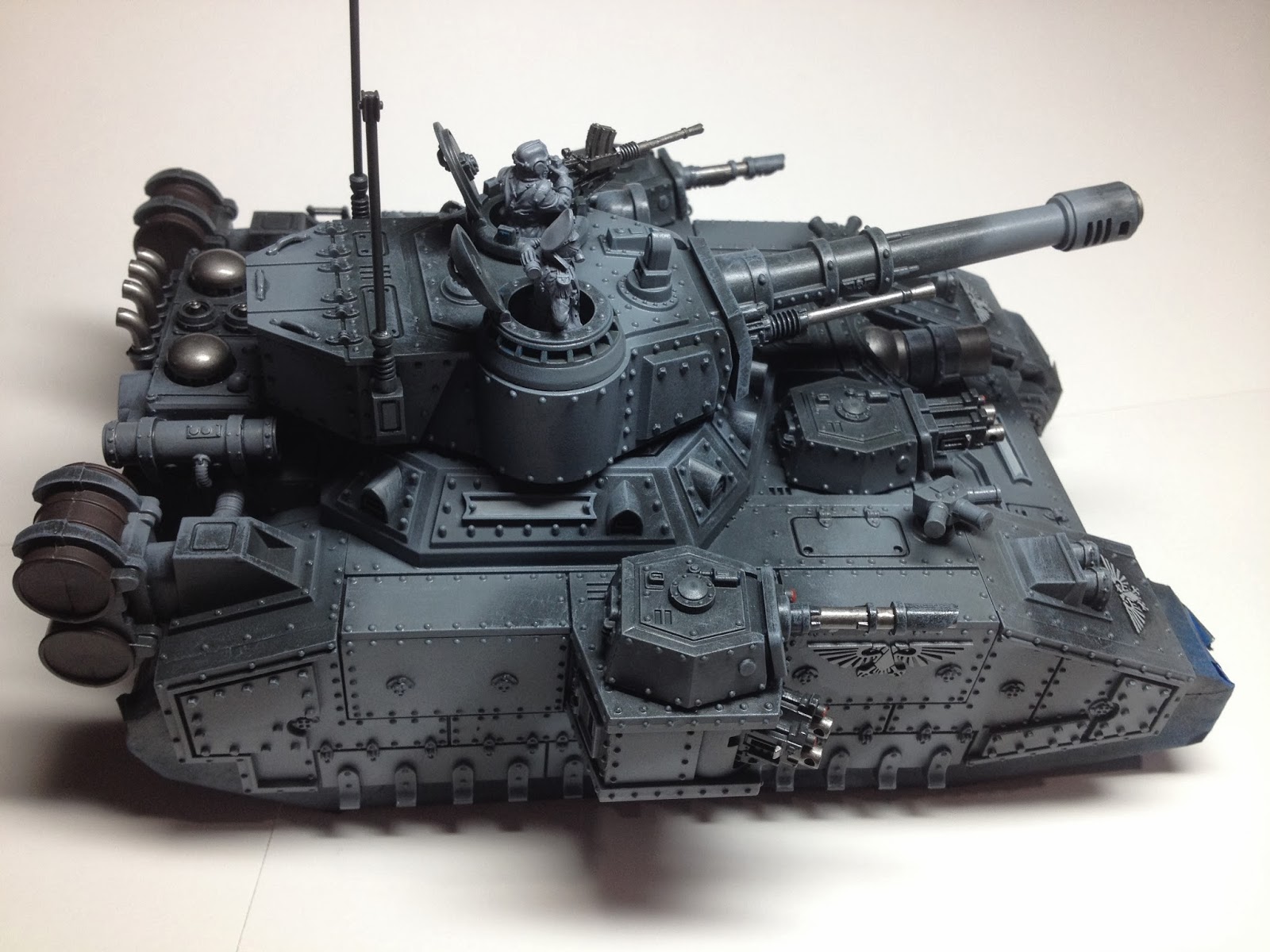 Next the real fun began.  The headlights were painted and the lenses and view ports touched up with some simple effects.  I am a complete novice at painting lenses/gems/etc...anything with glare.  I am very excited with how my first attempt at a realistic spotlight lens came out.  Not sure I'm done with it, but there it is for now. The slits in the crenelations at the mid deck were done in red just to mix things up a bit and suggest a "battle red" interior lighting on that deck. 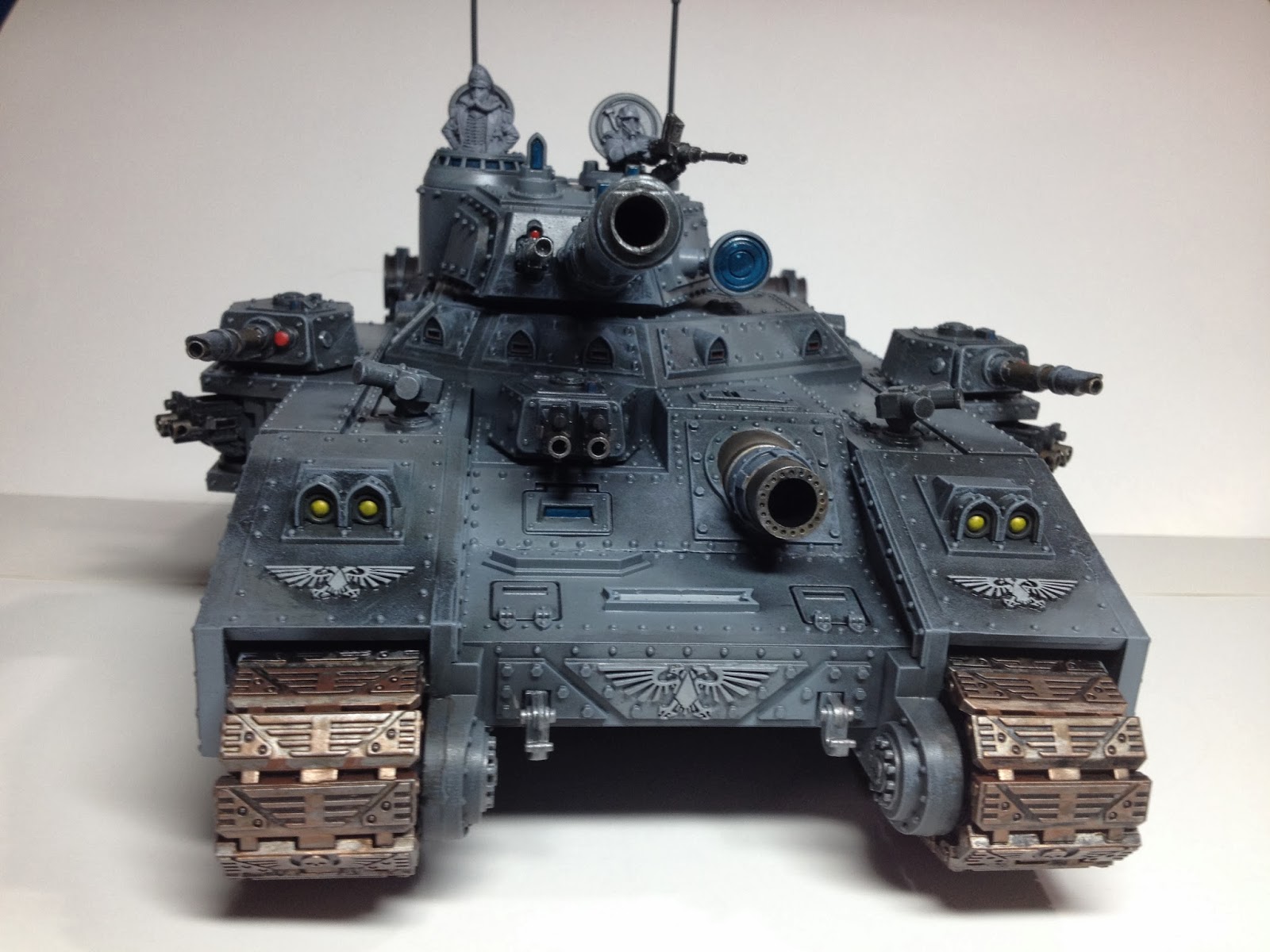 It was also time to remove the tape and being painting the treads.  I started with a heavy dry brush of gun metal and followed with a lighter dry brush with Vallejo metallic rust.  Then I went back over with a light dry brush of gun metal to highlight the treads.  The a heavy dark sepia wash from Secret Weapon Miniatures was applied to tie everything together. This level of detail will stand until I finish painting the bogey wheels supporting the treads.  I haven't decided where I'll take weathering at this stage. 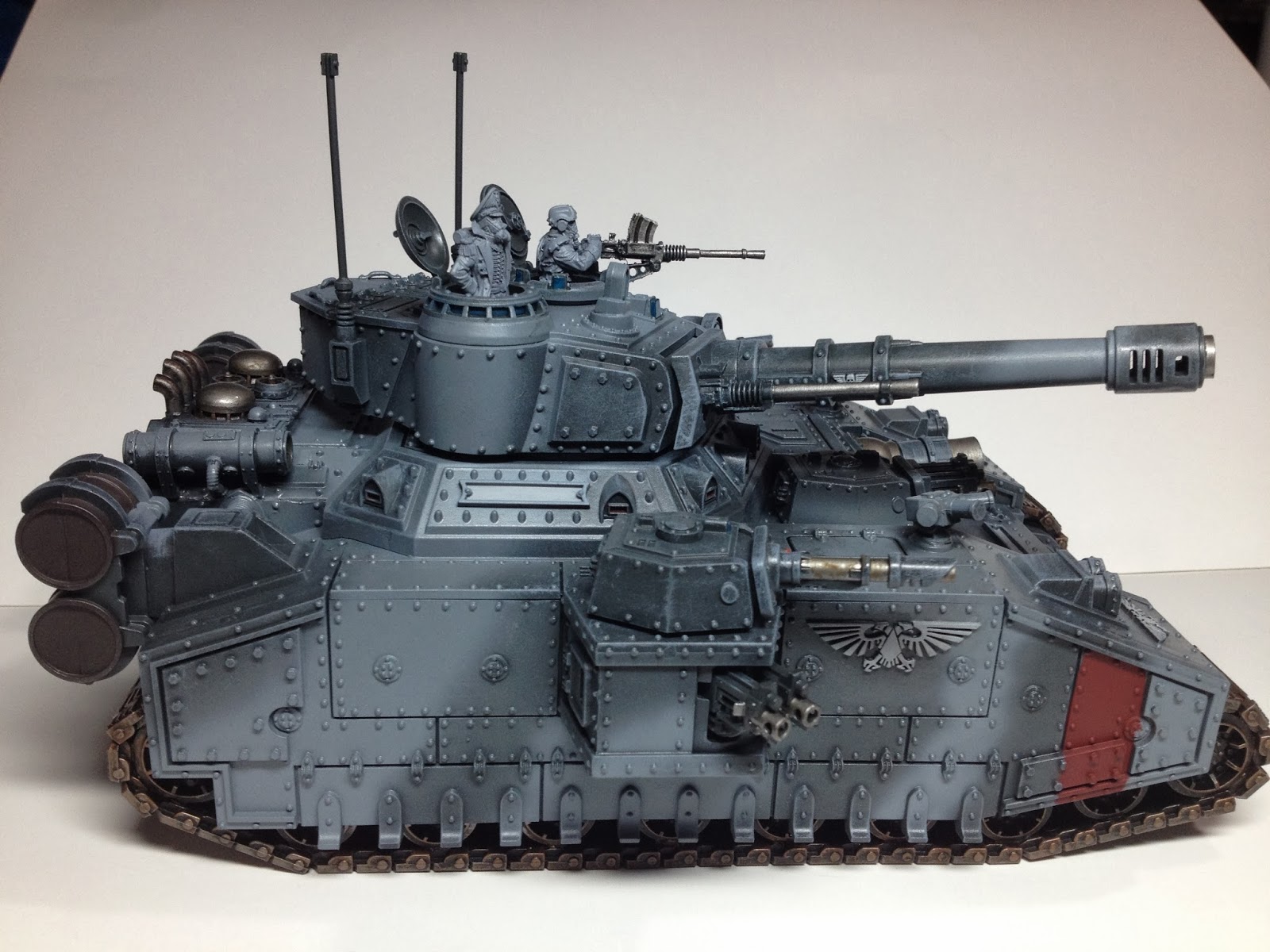 I decided to airbrush a red identifying strip up front where the regiment/company decal will go.  I'm planning to have specific vehicle identification numbering on the turret.  Somewhere, the serial number will be evident on the hull as well.  The Death Korps of Krieg follow no real standard between korps/regiment/company as far as unit markings.  I'm not going to match the true markings used by 8th korp, 7th regiment at the siege of Vraks...but who knows what might have been ordered up for markings in some other theater the korps was assigned to? 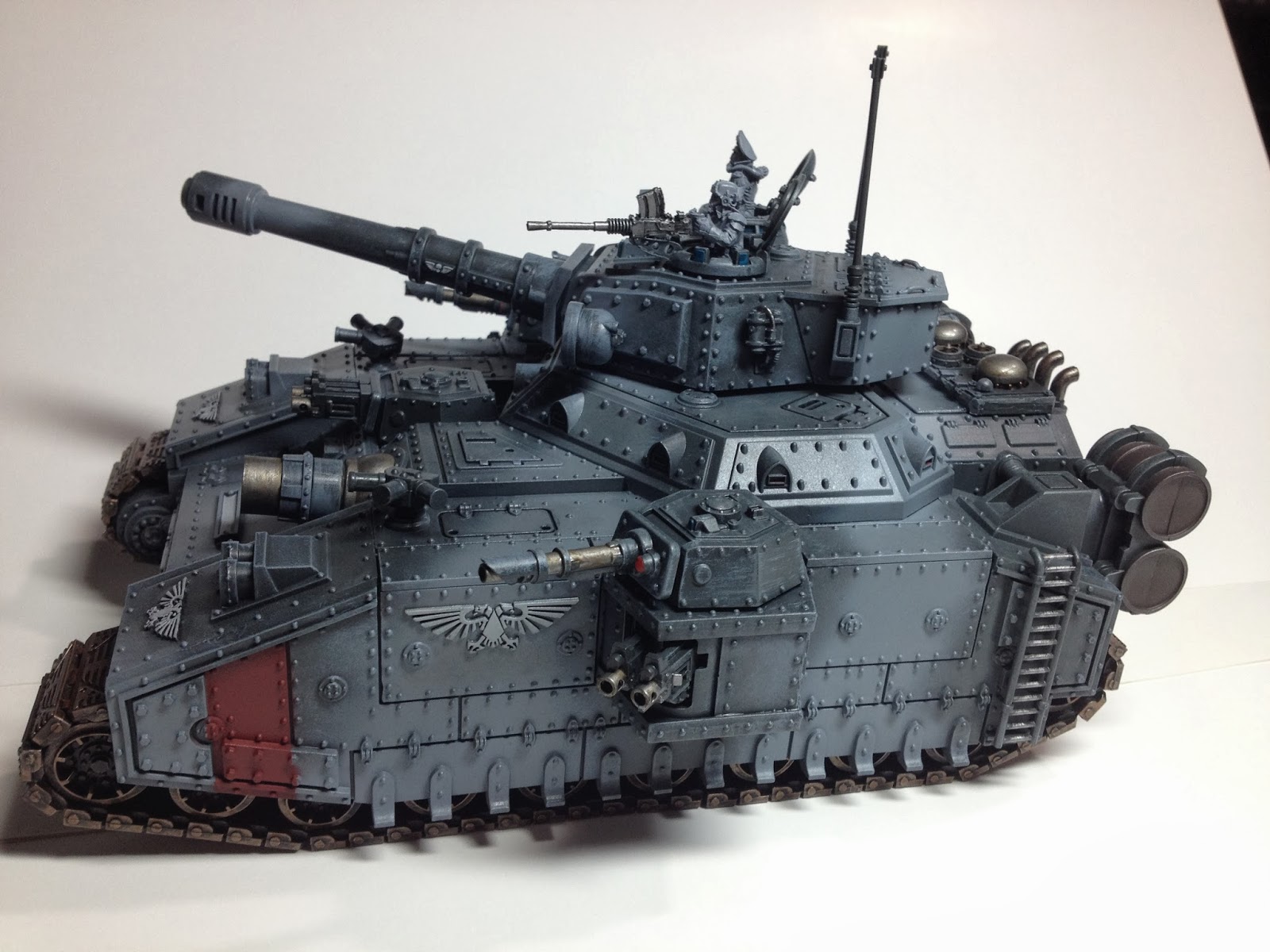 And finally the best part so far!  I am putting special attention into the shrine at the rear of the tank.  Super heavy vehicles are in short supply, mostly ancient and of noteworthy service being individually named and numbered. The tech priests are owed a certain license to provide a fitting shrine to the Machine God.  I hope this will a fitting place for the Magos responsible for maintaining this Baneblade to make suitable offerings. I have added a gun metal dry brush to the barrels along with a lot more weathering detail on the engine filters and exhaust manifolds and a muddy wash to reflect the general engine grime attracted to the rear of the vehicle. 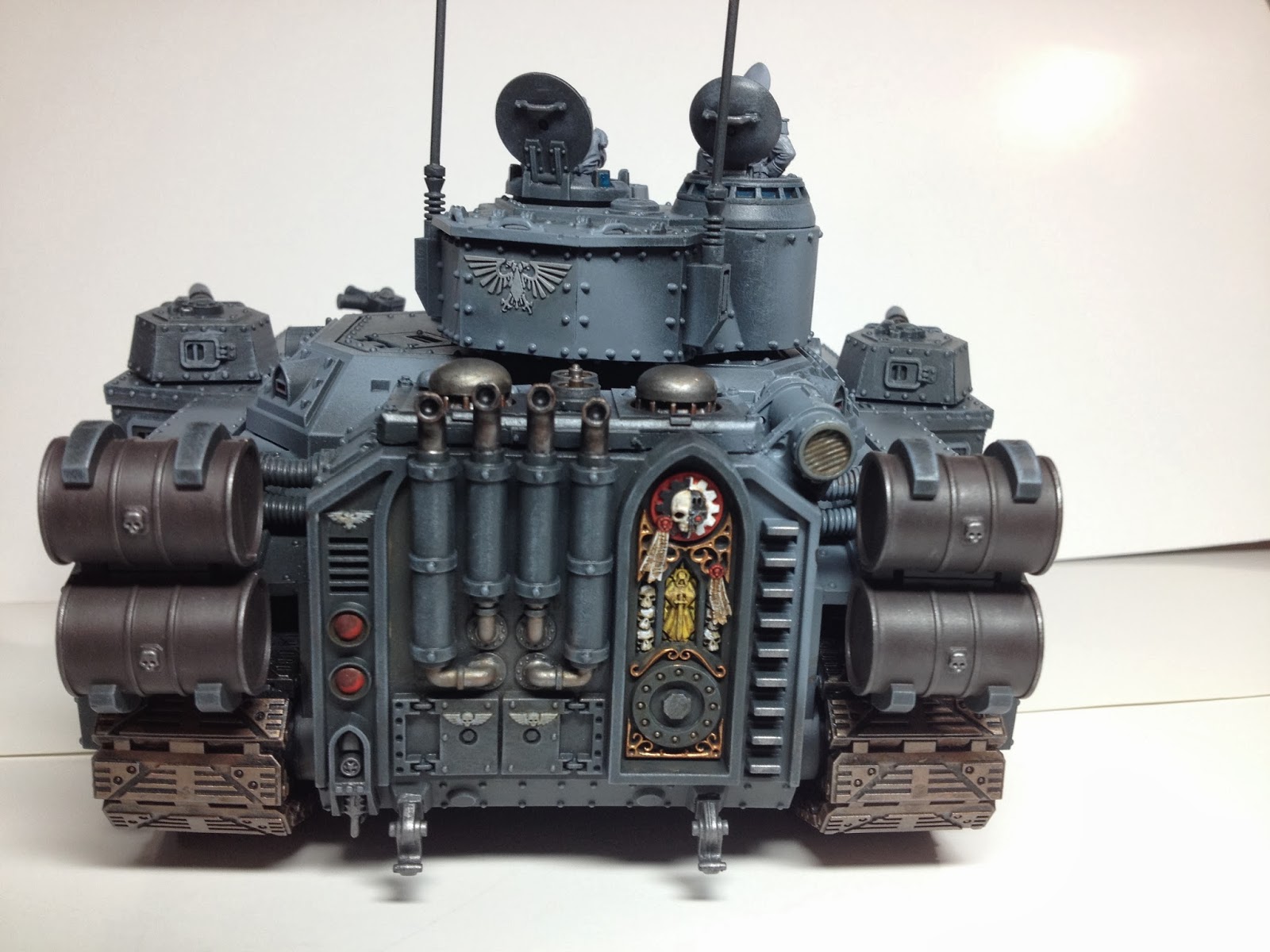 So that's where I'm at so far.  I added the commanding Commissar and support gunner for the pictures this time.  They are magnetized so I can remove them at will for painting. Also, I wanted the option of using the Commissar as a squadron commander in other tanks during various games of 40K. They are really going to shine on top of this Baneblade once it's complete I think.

Lots more to do before I'm done...the detail on this model is excellent and the large scale means it all needs to be treated with appropriately!  This is the largest 40K model I have painting and it's been a great test of skills. I'm looking forward to decals, but really don't want to rush that.  They will be added prior to any final weathering.

Hope you have enjoyed the update.