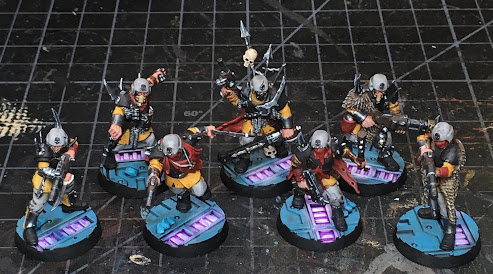 Greetings!  This second batch of traitor guardsmen continues apiece.  Another seven dudes, much like the first seven dudes!  Most, if not all, areas have received their base color and shading now.  Some highlights have begun, on metal, furs, and red cloth.  I'll set to the grey and yellow uniform colors next.  I'm cutting it close, but I think I can get both squads (fourteen models in total) done by Sunday to close out my personal Squaduary 2021 challenge. 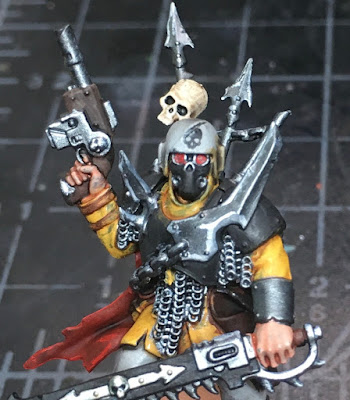 Back along, I mentioned I would do something different for the second squad to distinguish them from the first squad, for those game scenarios where they deploy as separate groups.  I had originally thought of doing this by color (like a different helmet or jacket), but decided a little decal on the helmet did the trick.  So these seven models are now part of the black skull squad now.  I like this approach because now the group of fourteen look fine all together, with just this subtle marking to differentiate them.  Yet, I think it's clear enough that one can quickly tell which squad is which on the board when reinforcing them, etc. 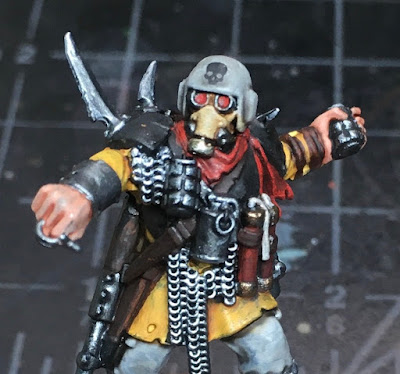 Still a favorite pose.  This pic shows where I'm at with various details.  We're very close to done here - if only I could speed up my pace at highlighting. 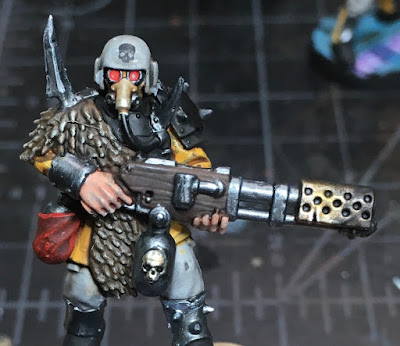 Another model to illustrate the progress this week  Out of the seven, I realize I picked only the three gas mask folks to show off - probably because I know I still have to work on the faces.  I worked some heat and soot staining into the weapons. No highlighting on the browns yet (wood or leather), other than the fur.

So I'm closing in on the finish line.  I like how things are coming out.  My next (and LAST!) post on these fellas will be early next week as a wrap up for my Squaduary project.  Then we're on to Adeptus Titanicus and my #MonsterMarch5 project. These various monthly challenges really help me line up things that I need to push on in order to actually get them done.  Otherwise I get caught up flitting about too much between things. 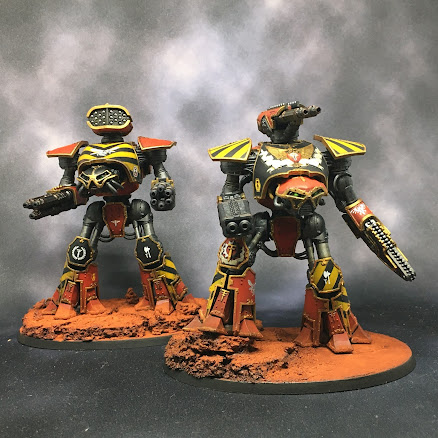