Progress continues on Shadow War: Armageddon terrain and kill teams.The new edition of 40K looks very cool and I know I have to make as much progress as possible before I am compelled to put this aside and launch myself into the new rule set. I'm certain to feel the tug of my existing armies and projects as models find new life in the changes to how everything is fielded.

This week I assembled my Ork Boyz from the Shadow War: Armageddon boxed set.  While I blinged them out with some kommando gear from Forge World that I casually picked up while completing my collection of soon to be OOP books.  I honestly can't get enough of the Forge World books! 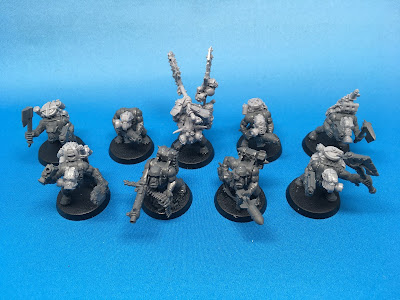 I've not yet played a game, but I hope these Boyz do well in the rules.  I'm thinking I'll play a few mock games on my own to get a feel for the rules and shake some things out.  I can test out how these brutes do against my Space Marine and Astra Militarum kill teams for now.  I haven't played or modelled orks since Second edition when they were my first ever 40K army!

The boyz will get a primer coat asap, then it's off to the hobby store for some Ork colors I don't generally use - primarily greens for the skin. I think Harlequins may be next up on the kill team to-do list...then maybe Genestealer Cultists or Skitarii?

The Shadow War terrain tiles got some love too.  The plastic is mostly glued up and all the bling has been added.  I originally left off most of the extra bits until I was sure I had settled on the final arrangement of the major parts. After priming, they will get glued down to the plywood tiles and the final ground cover and whatever else laid down and primed as well.  Though looking at things, I may need to hold off and paint the under sides before gluing things down to their final places. I can see it will be hard to reach a lot of the cool fine details in this stuff. 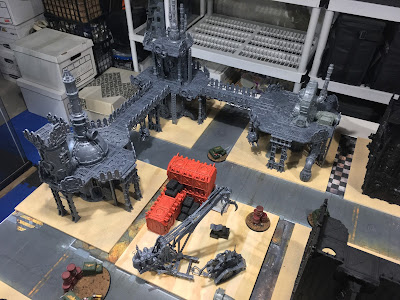 This terrain looks sooo good next to the Sector Imperialis pieces.  With a fun battle mat underneath, this is really the dream terrain I've been envisioning for years.  I'm afraid the foam core set from years past will be permanently retired now.  I will keep the fond memories of building, painting and playing many games on it, though!  I'll have to retire them with a post here to commemorate all the hard work that went into producing them.  They were my very first major scratch-build terrain project. 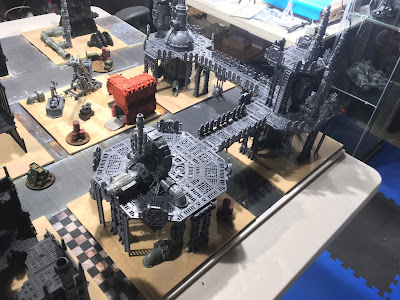 Below is another scenic tile I'm playing with using the remaining containers and Promethium Generator.  It adds some variety and cover...not sure if it stays or gets reconfigured yet.  I like how it looks along with the crane and container tile visible in the pictures above. 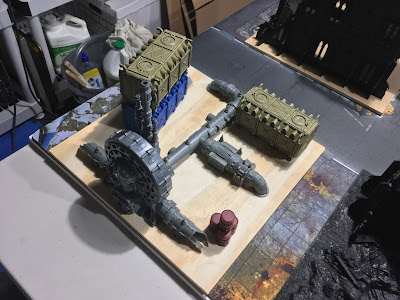 The full table is coming together and I look forward to settling on the final configurations for the tiles so it can all be primed and based for play.   As much as I'd like to have it all painted up, the reality is that these pieces will see many games before I get everything painted.  I have some ambitious thoughts about getting a bunch of relevant paint together and going full gangsta with the air brush for a couple sessions to lay down some colors to an easy table top standard.

If successful, this approach might make the table look better until I make time to get all the details down for each tile...something that may very well never happen in my life time given the many other projects I have now and possibilities yet to come.  I have added six tiles to the five or so building tiles I already head.  Getting all the base colors and some simple washes down would go a long way towards insuring the pieces are consistent and remain so over time, too.  So much to paint!

So until next time...