Well, what a week with regard to Warhammer 40K announcements, eh?  With a new edition of 40K imminent, it seems prudent to take a pause on 40K projects and focus on something else fun...Shadow War!  I love two things about the new Shadow War: Armageddon game:


Just brilliant in my mind.  Necromunda was fun, but it used the gangs which had no other place in 40K, even though they came form the same background, if perhaps a niche portion of it with regard to the Hive worlds. The basement gaming lab overfloweth with random factions thanks to my own enthusiasm and the packaging of various opposing forces, like Harlequins with Deathwatch, Chaos cultists with Assassins, Genestealer cultists with Deathwatch, etc...

After a brief perusal of my collection, I realized I already had the bitz for making seven new kill teams in addition to the two that come with the Shadow War: Armageddon boxed set. With the rules published for download on the GW web site, I have everything I need to run a variety of teams, plus provide teams for friends that want to try the game out.  Lots of new ways to play with out further investment, other than Hobby time of course. They even put up a roster sheet for convenience.

So this week I put together two kill teams and began to look at the new Sector Mechanicus terrain with a particular eye towards incorporating it into my existing Cities of Death terrain.  Here are some early WIP shots of what I accomplished.

First, and dearest to my heart, is a new Death Korps of Krieg kill team!  I'll likely just run them with the Cadian rules, or perhaps Steel Legion, but that;s k.  They will look fantastic once I paint them up. So I return to the blog the Korps for which it was originally inspired! 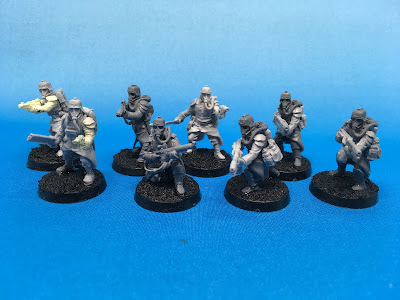 I built these all from left overs in my bitz box that remain from creating elements of the 262 Siege regiment. Some of it was recast crap I bough by accident off EBay in my frenzy to acquire bitz in the early days.  Some of it was authentic Forge World resin.  You can see the patchwork of parts in the pic above.

Engineer parts added a shotgun to a Guardsman recruit. Pieces from the Grenadier squad kit provided all the veteran bodies and hotshot lasguns to rep the Hot shot laser pack upgrade in Shadow War. A spare Company Commander provided a great Kill Team leader (Veteran Sergeant). Spare weapon arms fashioned a second Guardsman recruit. Salt with flamers and a Plasmagun and there you go! 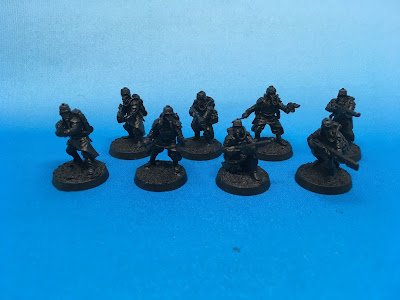 After a coat of Vallejo Black primer, they look uniform, authentic and ready for a coat of paint.  Time to break out the old recipe here on the blog and see how closely I can match them to my original painting for this regiment.  Stay tuned...

Up next is a quick WIP for my Red Hunters Space Marine Kill Team, built from the scout parts that came with the Shadow War: Armageddon boxed set. I forgot to shoot these guys before I primed them so the scratch building is no longer evident as a WIP.  I upgraded the whole team with Camo cloaks, and wanted to rep that for WYSIWYG, but the Space Marine scout range is pretty limited.  So I set about modifying arms and weapons to fit the five cloaked bodies form the sniper set. 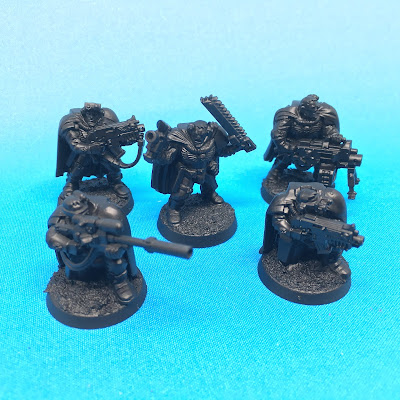 The solo sniper is built stock, the remainder have modifications from the minor to the more severe. For the team leader, I chopped the upper portion of the arms from the pistol and chainsword bitz.  This guy is the most awkwardly posed as a result, but I think it I managed the believable swagger of a Space Marine sergeant presenting a challenge. The two bolter scouts were similarly built by removing the parts of the arm that were already including in the cloaked body so that they attached naturally.  Some creative gluing and liquid greenstuff made sure the arms look like they belong now.

The heavy bolter presented the most challenge.  Simply removing upper arm bits didn't allow the heavy bolter to be held in a natural and convincing manner.  In the end, I used a blob Greenstuff rolled into a small cylinder to form the upper arm to the elbow that forms the right arm holding the weapon grip. A smaller amount of Greenstuff went into attaching the left hand to the arm portion of the cloaked body. I am not a good sculptor of Greenstuff, so what followed then initial attachment was a comedy of errors as I attempted to fashion a simple but believable arm fomr the blob of green putty. The result is a bit bulky, and perhaps ill defined considering the true molded details on the model.  But I like it.  If the paint doesn't call out the awful sculpting too much, I'll be pleased.  Under primer, it looks pretty good, I think!

So there we have five cloaked scouts for the kill team. The based for both kill teams are meant to represent generic ash/dirt fall out from the epic conflicts that shattered the hives where these teams operate.  I opted away from busy elements and simply went with a heavy coat of Vallejo Black Lava into which I plunged the various kill team members while it was still wet to represent their weight settling into and disturbing the ash and slag.  Once this dried, I popped/pried them off carefully and the glued them down again using super glue.  I debated pinning (which would really have been the thorough way to go), but in the end decided to risk a simple glue job.  The black Lava is somewhat tacky and holds models pressed into it after drying.  but is is no substitute for a stout glue.

Last up is my proof of concept for incorporating the new Sector Mechanicus terrain with my existing Cities of Death terrain...plus other bitz.  I have to say that GW hit it out of the park, esp. by making the new terrain match exactly with the latest releases of promethium Relay Pipes, etc.   I immediately turned to EBay for more rely pipe parts, and Cities of Death ladders.  While in 40K I didn't care too much how models got from one level to another (an so don't have ladders for each level of every building), Shadow War relies of ladders for guiding movement and it looks to be an important element of the game.  But I digress...lets look a the results of merging Cities of Death with Sector Mechanicus. 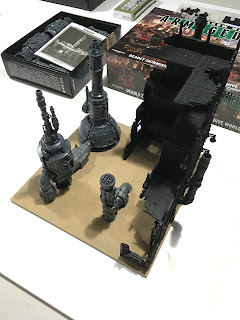 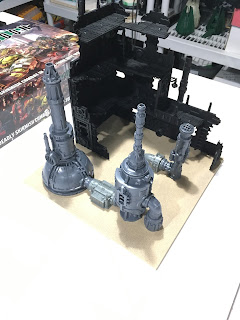 Brilliant! Here, I have started simple by just adding components from the Alcomite Stack set.
Nothing is glued down, and many parts are still not attached so I can continue to play with various arrangements and configurations.  To bring the elements together, I added a couple parts from the Promethium Relay Pipes set.  These simple elements help better fill out the congested look of a Manufactorum better than just the walls (and their few pips and stacks) alone.  This should play well in Shadow War but will be equally fun for a standard Warhammer 40K game. Win! 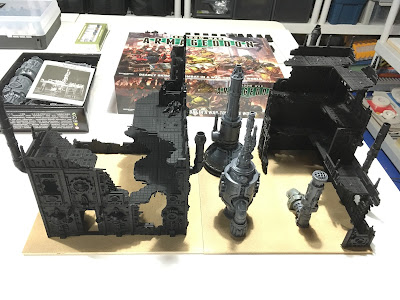 Above, a Manufactorum block starts to come together.  I believe that combining these pieces with more Shadow War: Armageddon terrain and the remaining Cities of Death buildings will make a great table to battle over.  Interesting elements, lots of line-of-sight blocking pieces.  Painting it all is going to give me fits, but fortunately, I enjoy painting scenery! The airbrush will help me get things to a reasonable table-top standard quickly too.  The details...well, they will take time.

I am very excited for the addition of the Sector Mechanicus terrain.  It will bring a necessary element to the scenery set I have always wanted to battle over.  Until now, all games were contested over primarily hab blocks and Administratum offices with the occasional bunker. I look forward to varying this with a believable Mechanicus vibe. And when I get bored with that, there is a tabletop full of bunkers, emplacements and trench lines which I will detail in some future article.
For now, the new addition of 40K approaches, and in the meantime I have kill teams and fabulous terrain ideas to implement. Oh, and of course this will incorporate the Containers and other bitz I've showed recently...and I'll finish those Custodes...and...
For the Emperor!
Cheers and Happy Gaming.